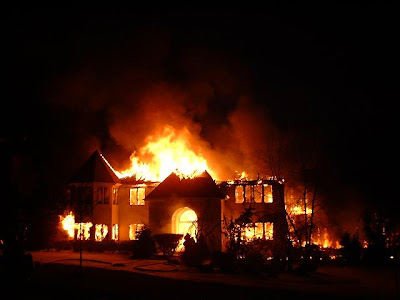 Well I hope not but if we didn't hazard burn, maybe!

In 1995 when the family moved to the new house in Kellyville it had been heavily wooded. Large Eucalypts were cleared but only to make space for the rambling new house and a plethora of 'stumps' the size of giant's fima's were bulldozed into an awesome pile. 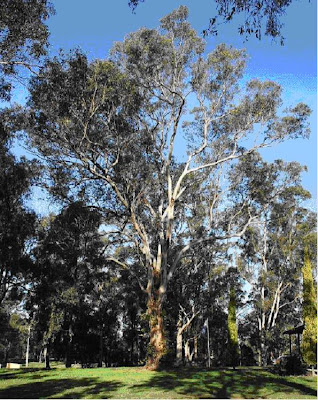 A survivor so far threatening to fall on my carport! Branches have done so - twice!
The lower end of the paddock had already been cleared and the stumps were pushed up there for safe burning on a regular basis. So began the annual Queens birthday bonfires in an effort to finally disintegrate these hardwood corpses. For 30 years now, we've had a bonfire on or near the Queen's Birthday long weekend. Outside fire season, safely and sometimes with legal fireworks sometimes with the odd stash bought by ThePlumber from 'Thunder'. Don't ask. More clandestine than an illicit drug deal and far less satisfying in the end.

Now back to the present . . .It’s been raining in Sydney over the past three months with few bright and dry weekends. Atypically, everything is damp. As always happens with eucalypts, shit has fallen off . . everywhere. There’s a fallen tree over the paddock fence and another balancing precariously over the neighbour’s cyclone fence. Both need a good chainsawing and stacking on the bonfire. The bonfire itself, has been neglected and will be built to it’s former glory by about 6pm on Saturday night. 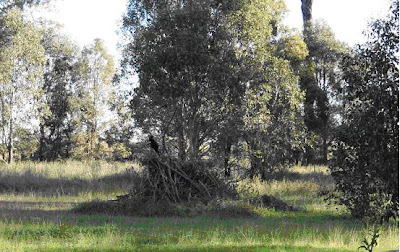 Little at the moment but the saplings behind are seedling 'toast'
Big as it seems, it’s basically kindling comprising fallen twigs and branches with eucalyptus soaked leaves and a few substantial logs underneath. Within 20 minutes of being lit it’s a gentle glow. Nice to sit around, share a few bevvies, warm the tootsies, sacrifice that sweater that your girlfriend always hated and generally have a feral evening in a silly hat before lobbing into bed smelling like an ashtray with a face full of smoke and charcoal under your fingernails. Sweeeeet!

Remember how the Firies turned up last year and berated me as the irresponsible adult for not having a permit for a burn (then posed for photographs as they departed) ? I narrowly escaped a fine so thought that this year, we’ll do it right.

The fire permit application is not a simple process. And bear in mind, we are outside the October – April Fire Ban period. First I need to receive an Environmental Protection Certificate which warrants the burn of piles up to 150cm in width (Oops – our bonfire is about 3 metres but no mind, nothing a rake can't fix once she's aglow).

A woman from the Rural Bushfire Brigade, who takes her job very seriously because she’s a public servant you know, inspected our property yesterday. I called this morning to see if we had been ‘approved’ and indeed we have but only after being given plenty of advice about it being too wet and causing smoke, about mulching instead of burning and being considerate of the encroachement of suburbia . . fuck suburbia! What consideration do I get for being hemmed in and covered with dust whilst their fancy pants houses are excavated and erected. What consideration do I get when power tools scream all weekend? What consideration do I get when your poxy alarms go off while you're swanning around the Whitsundays on your yacht? Was the woman blind? Did she not see the ‘mulch’ in my gutters and around the garden that is now six inches higher than the level of our concrete verandah it surrounds! I bet she lives in a friggin’ McMansion with a cowra pebble garden and not a real tree in sight! 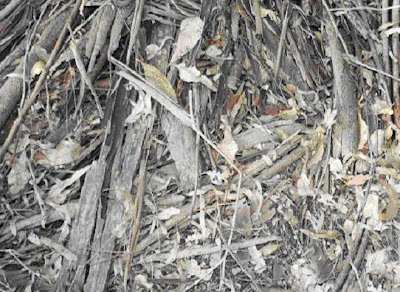 Seriously this dons my garden beds and gutters

What? Too damp! Has the woman never seen the explosive potential of a gum leaf when exposed to a Bic lighter? These are trees which ignite from a cigarette butt! Would she rather us do what the Rural Fire Service do and begin back burning on a windy 30 degree day often setting fire to inaccessible gulleys? Surely being ‘damp’ provides an extra safety precaution. (I swear there are more bushfires ‘started’ by backburning and arsonists than back yard burners) As for creating smoke which may waft into encroaching McMansions and mess with their hypersensitive olfactory – won’t happen. The petrol will take care of that! Seriously, one quick douse, a huge bang and all the damp stuff is instantly dry! No smoke. What little there is, will waft across the valley with the westerley breeze and accross the golf course, well away from encroaching suburbia.

That’s not the end of it, the EPA certificate then has to be taken to Kellyville Firestation and they need to issue a permit. This task is not so bad since I arrive there at the change of shift and it’s wall to wall firies. God we women love these guys, even the sooty smelly ones are deserving of a calendar. (Ok gratuitous sexual perve over . . it’s been a long time between drinks.) 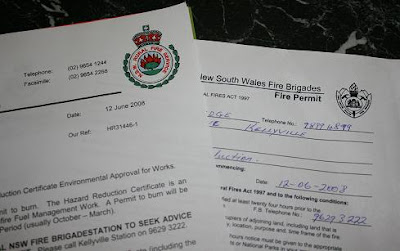 So very nice fire chief called Kevin is VERY empathetic and understands completely the fun of huddling around the fire. We have a very long chat while he explains that he's only doing his job and they're not treated well by the public and they need more than a 2.5% wage increase since the CPI is 4.2%. We discuss changing Kellyville, beaurocratic red tape and how if they’re called they may have to come out anyway but as long as we’ve got permission they might stay for a sausage sizzle unless needed somewhere else. In fact, they’d be happy to come out and blow shit up for us if we’d like. (politely declined, I don’t think they’d approve of the toilet paper firestarter or the fiery flying fox which traditionally sparks the first flame.) He couldn't find his permit book and the delicious smell of roast beef permeated through the fire station so I think he had dinner on his mind. He'll drop the permit in! Despite my protestations, he was quite insistant and sure enough at 6:00 a fire engine drives up my driveway, Kev gets out and hands over the permit. Now that's just showing off! He's lovely. Understands that kids wanna have fun. Hates the beaurocratic system but says he might see me Saturday night in the big red truck for a snag and a mag. I have a feeling they'll drop in whether there's a call or not!

So, done and dusted. If it doesn’t rain, we’re on . . . we can burn baby burn – all legal like! Boys, no fireworks, bungers, sparkler or bottle bombs. I will be watching!

And whaddayaknow . . I feel another Talking Heads song coming on . . . That reminds me, must pay House and Contents Insurance tomorrow.

Now a quick shout out . . if there's anyone willing to queue outside the Apple store on George and King on opening night next Thursday, 19th June and grab a free T shirt for my lovely boy Crispy in Melbourne . . there will be a prize, you have to be in the first 2500 after 5.00pm opening to qualify. I'd do almost anything except queue outside the Apple store for 24 hours for his geeky bewfulness.

Have fun Saturday night and hope it doesn't rain for you! I don't doooo queues! Hhehe

PS: We want to see the photos!

hmm baino, sounds like not only the bonfire sparks might be flying if kev comes around with his big red truck on sat night ;) greetings from the margaret river vineyards, i have some wine but i think it's too good for a bonfire! i'll see you sson with my cab merlot cleanskins ;)

No Wicker effigies? No ritual sacrifice? Tell me there will be at least some pagan activity :-)

Have a fun weekend, it is here soon. Well you said it has been raining so fires should be a problem now but be careful!

No danger of sparking a forest fire with all that rain - PHEW!

I'm so jealous, you get to have snags with the sexy firies!

Thanks Anony, just depends on the weather now which is inclement to say the least and there will be photos!

Ryan: Kev is not hot but he is the boss . . .always a good idea to get on with the boss. I just love that he turned up in his big red engine to deliver the permit! Save the good plonk for ron.

Thrifty: No effigies, the effin neighbours would go effin spare! There will be nudity . . we're talking 21-23 year old men here they can't resist flashing something obscene. One skateboarded home in the nude last year!

Quicky: The worst thing about the 'damp' is muddy footprints in the pool room and on the carpet!

ClareBear: We'll miss you and your mob too darling! Adam invited Bec and Em but hasn't heard back from them so just a select few rather than the usual crowd. (Pallet burning has been banned!)

Ahhh, I love a fire.

Wow baino, I think this is the first time I've seen you angry. I'm duly warned. What a lot of red tape in the land of the free. Seriously, I'm surprised.

EM me too, I'm half hoping they drop in for a snag!

Ernest: Haha . . believe me, that's not angry . . just petulant! But you should be careful, Hell hath no fury like a Baino scorned! Re red tape . . we are over-regulated to the hilt here. It's really rather annoying, an issue arises, there are immediate cries to legislate for/against it! But that's food for another post.