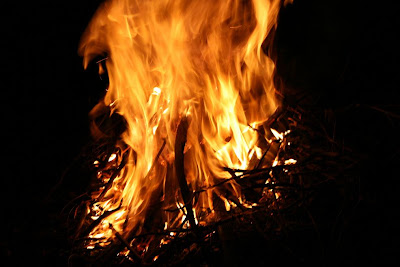 Personal stuff today. Well it is a personal blog. Last night was Friday night. I didn't post. Had little to say and besides, I was distracted by some very good company that I have been enjoying a little more than usual lately. We ordered pizza, poured a beer, lit a fire and photographed the moon. We chatted about ISO settings, the frustration of living with tradies who don't fix stuff, future potential and overhanging branches that form nice little bridges towards the roof for a variety of vermin that we are still trying to eradicate.

We fell asleep watching National Treasure and woke up in time to watch an hour or so of Rage (music video) Nope, not some new lover or long lost friend . . .just me and DrummerBoy. He has grown up and we have become peers rather than mother and son, although make no mistake, I still rule the roost!

Last week a significant piece of mail arrived - DrummerBoy's Degree. Like his sister, he also has denied me the cheesy mortar board photo and opted not to attend his graduation ceremony in April. So, the degree arrived unceremoniously and without pomp. Three years of Horticulture culminated in a rather plain looking piece of paper with a very non-varsity looking logo but a degree it is. Well fought and won by someone who is not particularly academic but can put in the effort when pushed. I'm thrilled that he stuck to it although in hindsight we both agree, an apprenticeship would have been a more practical course. Still it's a degree and kudos to the boy . . . hopefully it will open doors and already he's talking about further study in building and construction. 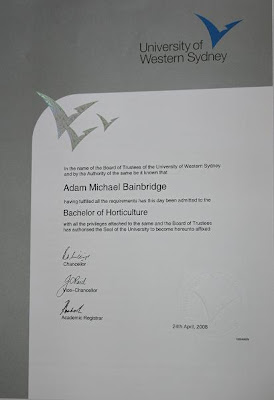 He's a good boy my boy. I've come to really appreciate having him around since ClareBear swanned off overseas and has now been gone four and a half months. She is enjoying the company of friends in Toronto for the next week before flying across the pond to the UK. I last heard that she was practicing the Tim Tam slam thanks to a parcel of Aussie made goodies that I sent to Fraser's for all the ex-pats in his household to enjoy. I miss her. I miss her much but her absence has been wonderful for the 'second fiddle'. We used to joke (with an element of truth) that she was the 'favourite' child. Simply because she was very easy to get along with and conflict between us was rare. Although I think there was a slight 'seething' below the surface where DrummerBoy felt he was sometimes pushed into the background whilst the golden girl did her thing.

Before her departure, DB and I argued a lot. Mainly because he's very similar to me. Doesn't like being told what to do, doesn't like it when I raise my voice. He's one of these 'talk to the hand' can't be told types who has to try everything out for himself and often gives me the pyrrhic victory of being able to say "I told you so . . ." Although I rarely do. We're both opinionated and unafraid to tell it like it is. We've had a lot of "I'll discuss this when you calm down" retorts but - having had him home one-on-one has been a blessing, especially since he started work a couple of months ago.

It's hard work. Eventually, he'll be project manager for a landscaping firm but in the first instance, he's been put to hard labour in order to learn the ropes, get a feel for life on the ground floor and to understand the plight of those he will eventually manage. This has been a great learning curve for him and he's beginning now to understand why I come home sometimes, frustrated and cranky and needing to vent about the day. Our evening conversations are all about work, frustrations, future plans. He's out by 6am and home by 5 with little break in between. It's tough work, carrying, lugging, stacking, digging . . .and he's knackered by 9. Rain is no impediment to this company which has issued all it's workers with 'wet weather' gear when lesser landscapers would be standing under the eaves or heading for home. 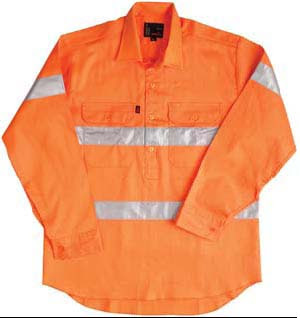 I'm really proud of the way he's applied himself although occasionally the GenY attitude comes through. He wants to be promoted after six weeks, looking for something more satisfying . .you know how it is. He might not stay with this bunch but he has a new confidence without arrogance. He knows he has much to learn but he also knows he has tertiary qualifications and skills. He understands that he's a babe in the employment wilderness but will not allow others to take advantage. He has a good head on his shoulders.

At the moment The Fringelet is deep into study for her final Uni exams and so his social life has been somewhat curtailed. This has given us even more opportunity to chat, cook, play and I finally feel that I really know the young man who has been in my life for 21 years because now we can talk to each other without competition, we can argue civilly, we have more in common than ever before as grown up life takes hold. 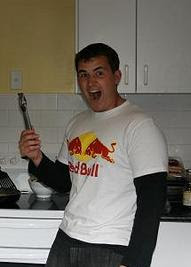 That's a rare thing. I know many younglings who deeply love and appreciate their mothers but don't have that extra something. I appreciate being his confidante and his friend. Maybe it's the privilege of single parenthood as I've said before, maybe I'm different, maybe he's different whatever it is, I thank my lucky stars that not only do we get on, but the Fringelet too is like a daughter to me . . (saved myself from the mother-in-law jokes with that one!)

It's the simple things . . ."I'll shout you a pizza", "let's light a fire and have a beer", "I'll teach you how to play Call of Duty or Rainbow Six" (failed miserably I might add) "I can fix your washing machine . . " and lately . . . "I love being home in the evening, it's so relaxing". What? My son likes being home with his mother! Excellent! I'll make the most of his company whilst I can. He's no longer the curly haired toddler with dribble on his chin. . .or the reckless teen trying to blow things up with chlorine and vinegar (although I wouldn't put it past him) he's happy, intelligent, good-humoured, responsible (most times), healthy, employed, in love and comfortable with his old mum . . I like that about my son. 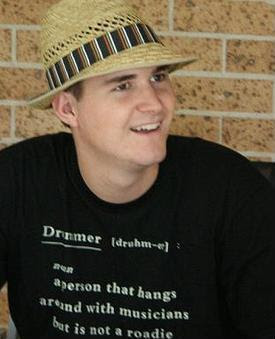 Ah bugger it, I was going 'awww' just before I read you telling us it was time to go 'awww' now. My eyes are misting up slightly too.

Sad about the lack of 'pomp're the graduations though. We could all do with a bit of 'pomp' every now and then, so crack open some boutique green-glass beer instead of the brown longnecks to celebrate.

AWWWWWW! Congratulations Drummerboy and your Mum for surviving it :)

I know, I know. I was never one of those mums to bring home the "Pen Licence" or brag about the school report. I've been a 'keep it real' mum all my life but I'm so proud that he actually stuck to it all because he was never the 'academic' type. He's such a nice kid and not embarrassed to be seen out with the old cheese . . deserves a bit of a pat on the back occasionally. Although if he doesn't get that bloody tractor out tomorrow and mow the front lawn before lunch, there could be a post in an entirely different vein!

Anony: Not that graduating is that big a deal but I would like a silly photo of them both in that damn awful outfit. Although he looks a bit like a fireman and much more handsome in his high visibility wet weathers. Even I went 'Caw'. *wrong in so many ways*

"You get out of life, what you put into it"

And Congrats to Drummerboy for pushing all the right buttons!

Sorry. AWWWWWWWWWWWWWWWWW. What a beautiful post. You and I have a lot in common when it comes to our relationship with our boys, so this really hit home. Thank you for sharing your wonderful DB with us.

Congratulations to him at getting the degree.

Well done to you Baion for producing and nurturing such a fine young man! With you for a mum he is on a winner.

Congrats DB, and hang in there, the right move will come in plenty good time.

Ten cans of it in two hours gives you a heart murmur.

You're TAGGED for a meme, Baino!

Awww, indeed! :) What a wonderful post and I read all of it with a sense of comfort ... knowing that maybe someday I'll be writing similar posts. I'm all excited to spend a whole day with Charlotte on Thursday, while Iris finishes up her last day of preschool. These days are few and far between for her and I. It's so good to read of your time with Drummerboy and *congrats* and *cheers* for the degree!!

As the used to say in Essex and probably still do "The boy done good".