Once In A Lifetime

I watched a rubbish DVD last night “Fools Gold” with that Matthew "Oh my God bod" Machonachie and Kate squintyeyed, whatevers, skinnyblonde. The plot was basically about a treasure hunt for some lost dowry, safely sunk on a galleon called Aurelia!

Didn’t that open a can of worms! The ship upon which my family travelled to Australia as ten pound poms was called Aurelia. Yep, sometime in September in 1968, The brood from Cheshire arrived in Southhampton for the journey of a lifetime. Mum 34, Dad 36, me 11, HippyBro, 9, Babybro 7 and Babysis 2.

We were very impressed with the ship until we realised that it was in fact the P & O Fairstar that actually had us agape and agasp, complete with white linen, floral displays in the dining room and full fare paying passengers. 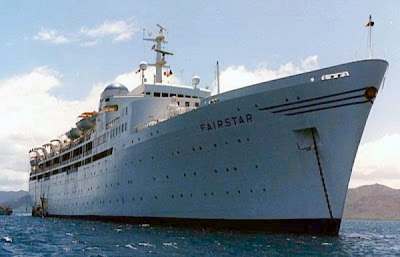 We were to follow her fablious giganticness across the globe wishing it was us on her lofty decks instead of squished on the tiny Aurelia creeping demurely behind her at every port. No flowers on our white tablecloths - I can't even remember if there were table cloths! It was an Italian owned and run ship but originally made in Germany and named the Huscaran and after just one voyage was seconded by the German Navy and saw service as a troop transport, armament freighter then sub marine depot and was eventually captured by the allies in 1945! Far Canal! She was refitted in Liverpool in to carry 775 passengers and Sold to Pacific Canadian. She became a Beverbrae . . .seriously she brought refugees from Bremen to Canada and freight from Canada back to Europe. In 1954 she was sold to Cogedar Line and renamed Aurelia. She was rebuilt for emigrant service to accommodate 1,244 passengers with the sole purpose of supporting emigration originally from Italy and eventually from England. She re-measured at 10,022 GRT. Her first voyage was from Trieste to Sydney. Incidentally carrying the mother of a girl I was to meet in 1995 and eventually write a 50th birthday speech which is how I found out about the Aurelia connection.

Notice one row of portholes below deck?

Later incarnations saw her reborn as a Mediterranean cruise liner, for 177 passengers (now you get the picture of how many people were on this little ship!) Romanza and then Romantica – she even survived an engine fire and was eventually taken to Alexandria in 1997 for scrap. Quite a life the old girl had!

We all have differing memories of the six week sojourn having never been on a ‘cruise’ before, we had no expectations . Families were split into different cabins. I don’t really know why. Mum, Babysis and I were in one cabin to ourselves. Dad, BabyBro and HippyBro shared with Alain Fageurey and a non-English speaking Spaniard called Christian. All BabyBro remembers is the Spaniard forcing him to smoke Gitanes or some other strong French cigarette and being locked out for periods of time while Alain entertained the ladies.

Babysis remembers the p urser. He would approach with arms waving as if about to shout out a warning and kiss her spaghetti smeared face, pinch her cheeks and announce to everyone in a bellowing voice “Ciao bella . . wanna day I’ma gonna eata that kid!” He never seemed to tire of kissing this disgustingly sauced (literally) two year old or pinching her chubby cheeks. She was a poppet of a kid with short-cropped, dead straight, blonde hair and massive brown eyes. He loved her.

My memories are of a pungent odour near the galley, attending school for a few hours each day, colouring in Australian native animals and learning the words to Waltzing Matilda. This was apparently introducing Aussie culture to the foreigners . . . we Poms had been exposed to Rolf Harris and Skippy and knew all about Australia.

I remember everyone being so ill that the place was deserted crossing the Bay of Biscay other than the brave souls who believed that rising and falling with the storm waves would help them acclimatise before hurling their breakfast over the side. We were all incredibly sick for four days.

I was very disgruntled at almost being a grown up and forced to eat at children’s sittings which comprised invariably of spaghetti bolognaise and ice cream for dessert and cups of incredibly weak tea with powdered milk sachets. In fact a quick round-table at our family lunch the other day, revealed that we did indeed eat little else than spag bol for six weeks. None of us could remember breakfast or lunch.

There were parties, dressups, crossing the equator shenanigins and fun. . . all it seemed, for people a little younger than my parents or a little older than me. There were movies, and play centres, and a teeny weeny swimming pool . .it wasn’t a large boat. And I had a pair of blue buckle shoes with a kitten heel that matched the colour of the ocean and I saw my first albatross and sea lions – I loved those shoes.

I remember Las Palmas where I celebrated my birthday and received a pretty Spanish fan. I remember a disgusting birthday cake which, instead of frosting, was spread with coffee flavoured butter and a sprinkling of icing sugar. I remember the NO Blacks signs in Capetown where we had a wonderful milk shakes with fresh milk (only powdered for the peasants) and I remember having afternoon Tea in Kings Park in Perth . . more toasted sandwiches and thinking that this place wasn’t so bad after all!

Because it involves water flowing and change and how my father must have felt and I just like it!

Love that song. And the album "Stop making Sense", it got played constantly in school one time for a 4 week period.

The food sounds totally disgusting. You must have been glad to get to Oz and have some decent food for a change. And I love their idea that Oz culture was Waltzing Matilda and koala bears!

The trip must've been a bit of an ordeal but good memories and experience all the same. I wonder what todays kids would make of a voyage like that!

Nick: we were kids, the best food in the world is spag bol when you're 11! Seriously, I don't remember eating anything else although I'm sure we did. And to further educate you, they're Koala's not bears!

Quicky: I only remember it being fun frankly. It's when I look back I realise what a junk that ship really was. Why we didn't fly, I'll never know! Hey, it meant six weeks off school and that's al

I would love to have a boat like that (well I can dream)... actually even if I were a billionaire I can't imagine actually BUYING the boat... too expensive!!!

what an adventure! it was great to read about it, both from your little and from your grown up eyes.

your parents sound like true adventurers. this is how/why you got to australia, right?

Hey Gleds good to see you back, you had us worried. Lay off the orange stuff! Yeh, not much of a sailor myself too many people in close quarters. I'd rather hire a yacht around the Whitsundays

Hi KJ yep. Assisted passages were commonplace to encourage European immigrants to Australia. I never thought of my folks as adventurous but taking a young family 12,000 miles away from their grandparents was I guess a quantum leap. My mother was dreadfully homesick for years but stuck it out. Good move in the end.

Did Captain Birdseye helm the bridge on that boat?

That was a good read Baino! Dad came here on the Aurelia in the 40s from Europe but it didn't look as impressive then. He still has photographs!

What a journey! Your post comes 2 days after Adam my housemate / landlord / friend told me the story of 10 pound poms. I find all kinds of emigration and immigration stories fascinating, maybe because I moved around myself a bit and appreciate the trials tribulations. It must have been really tough in the old days though, the travel being slower and circumstances dire.
Great post of memories and very informative, too.

It sounds like you had an experience of a lifetime at a young age. A crowded experience, mind you. :)

Anonymous: I don't think so, no kiddie-you-know-whatting as far as I'm aware.

Anonymous: Really? I didn't think it carried passengers to Oz in the 40's. . .I got most of my information from this. http://www.nzmaritime.co.nz/aurelia.htm

GAYE T HYPHEN B! "must have been tough in the old days!" I hope you're inferring that the 60's were the 'old days!' How very dare you!

Yeah . . Imagine coming out here in a bark like James Cook's Endeavour or shackled to some convict ship amongs the slop and the rats - now that's a grim way to travel.

That we did JD although I'm not sure how much is memory and how much is heresay . . but I really did love those shoes!

Oh I meant the OLD OLD days, you know, 20ies and 30ies.
You have done it easy on a nice ship. How about people who drowned swimming to Australia because there were no boats at the time? :P
Sorry, was a little cheeky just then.
So when we do meet real life/catch up? How about this Sat???
Gxoxox

by the way skype me baby! gayetb :)

Here is another spooky bit of information for you, My Nialler, the Irish goi, roight, was a drummer when he was a youngin in Dublin. And guess what he does for a living. He is a horticulturalist.... How spooky is that?
Congrats to your DrummerBoy on his graduation by the way!!!!

. . . .oooh is a bit spooky eh? Nice to have some starters in common! I'm so looking forward to meeting. And yes, work is overrated so I'm packing up, spitting the dummy and going home!

I've got a lovely photo of Hippybro and Babybro in matching outfits standing beside an Aurelia lifeboat. I wish I could remember, too little - do have another sweet photo of moi in a blue hat and cossies...tres sexy!
Guess I'm still turning the 'old italians on - today I got flowers at work from a patient - Mario....lovely. Great Song....still got the Albums!!!!!

As a small child in 1960, I was on the Aurelia heading for Australia as well. Starting in Bremerhaven, our voyage only took 4 weeks as we passed through the Suez Canal. I also remember everyone being seasick in the Biscaya, all except me and my dad. My family was split up as well, mum and the four children in one cabin and dad in another. Our first stop was Messina. Quite an experience for me!

My family left England in 1968. We sailed from Southampton on the FAIRSTAR! I have a vague memory of the Aurelia always being at the ports we visited. BUT - we were ten pound poms too, and a lot of the passengers were. Somehow, by good luck, we had a cabin for all six in my family on the promenade deck. It seemed a lot nicer than the cabins down below. Also, the Fairstar wasn't P&O back then, it belonged to the Sitmar line. Happy days!