To The Victor Goes The Credit 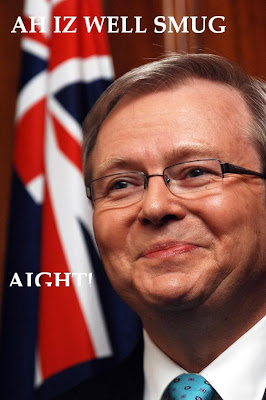 Today the first of all Australian combat soldiers in Iraq arrived home! Fulfilling an election promise, the Rudd Government will be withdrawing all troops except a small contingency to be utilised for diplomatic protection.

Australian involvement has apparently given the fledgling Iraqi Army the space and time to train, grow and "consolidate into a capable force that has proven itself time and again in recent months." We are no longer needed. Defence Force chief Air Chief Marshal Angus Houston said this afternoon that the time was right for Australian personnel to come home. "The Iraqis are doing the business," he said.

However1000 Australian soldiers will remain deployed in Afghanistan. And rightly so to my mind.

This is good news. Many troops came out of Iraq much earlier however, during the Howard Government's tenure in power - but you watch, Kev will get all the credit:

According to a press release Press Release 42/03 on 17th April 2003 from the then Minister for Defence, Senator the Hon. Robert Hill including:

The Howard Government did send another 500 trooops in May 2005 as requested by the British and Japanese to assist with construction and humanitarian work. But now, apart from providing some diplomatic security and consultancy . . our part in this stupid, senseless and falsely justified invasion is over.

Smooth. Came across a great quote from McCain the other day:

“I will have an energy policy which will eliminate our dependence on oil from the Middle East… that will then prevent us from having to send our young men and women into conflict again in the Middle East.”

He he, WMDs, what WMDs. He's got a skill for foot in mouth disease that one.

Good that the troops are coming home from, as you say, a stupid and senseless invasion. And good that they were mainly in a supportive rather than a combative role. Though no doubt there were still plenty of casualties from the unpredictable guerrilla violence. Thrifty's McCain quote certainly nails the lies yet again!

Nick: Our contribution was small but apparently effective in teaching Iraqi troops and protecting those reconstructing Iraq.

Afghanistan is a different issue, our SAS troops are in the thick of it.

No Aussie was killed in Iraq except for some young idiot who accidentally shot himself. As for McCain . . could well be their next president if what I've been hearing is correct. They consider Obama a commie Islamist sympathiser . . .and he's black . . almost as bad as being a woman.

...almost as bad as being a woman.... CLASSIC!
I want a world men and women rule equally, with no wars, no inflation, no borders and no power struggle, no hunger and poverty... Is this possible?

I'd say Australian soldiers need to go nowhere, but I suppose they need the practice, if they sit on their bums and do nothing all day, when Indonesia invades Australia (!!!!!) they will be useless. :p

The sooner other countries follow suit the better! Never should have happened in the first place!

I know for a fact Howard sent more air force troops over early 2007...dont know figures, however do know it was done as a close friend of mines brother was one of them....he's still there. It is still a very dangerous place and is often in "lockdown" due to attack primarily by car/truck bombings and bugs being attached to soldiers when they are on leave in Bagdad! Did you know they even have "cardboard" money so it doesnt make noise and alert "the enemy"....get 'em all out I say, bring our boys home and it doesnt matter which prime minister does it!

Gaye, well it's either vote a democrat woman or a black male. . not much choice for the right wing majority! I have no problem with the deployment of troops that's their job to fight but this invasion was wrong from the outset. A tough lesson learned. We were lucky not to have sustained casualties. . the US, not so.

Anony and Quickie . . yeay what you say!

Lou you're right, the war started in 2003. Here's a timeline.
http://news.sbs.com.au/worldnewsaustralia/timeline_australian_troops_in_iraq_548270

I thought the Kiwis were awaiting the opportunity to avenge 1st February 1981.

It's unfortunate that the only part of the Australian flag that can be seen is the British part.

ugh, no need to feel sorry for john howard not getting credit, thats just some long overdue karma biting him in the arse. not as hard as it needs to either!

Haha Ian. . the keep trying but we put them in detention centres and burn their boats. I'll have to email you re the 1981 reference . . rugby?

Estevez: Hola you little veggie free left wing Ruddlover! I don't feel sorry for him believe me. Just don't see why Kev gets all the credit. Then again, there's barely been a whisper about the troops, it's all been about fuel watch . . how soon we forget.