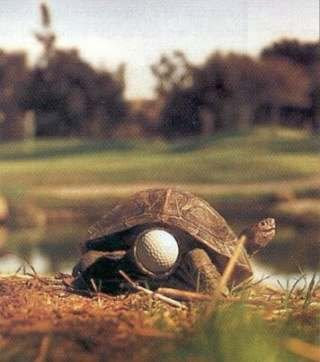 I walked into work this morning and The Elder Statesman, The Boss and Char were talking about Tiger Woods epic putt at the US Open. Apparently he's drawn level with another golfer and they'll have to play the whole 18 holes again . . .what? No penalty? No play off? No best of six? They were all very animated and excited.

I don't understand the passion for golf. I come from a long line of successful golfers. My father actually severed family ties and chucked the rest of us on a tin can boat and emigrated to Australia because he could no longer afford the golf fees at Romily Golf Club (oh the shame!). My mother took ladies day on Thursdays very seriously and ended up playing Pennants and enjoying the 'mixed' on Sundays. My brother changed Christmas for a game of golf (we used to celebrate on Christmas eve but there's a boozy golf comp on so it was moved to Christmas day and now everything is over in a rush. And my brother in law won trips to America by virtue of the fact that he could play in the left-handed championships. Even my son at an early age was 'enrolled' by Grandpa and has a 'good swing' and a 'long drive' apparently.

My husband was only deemed a suitable match because he was Vice Captain of the Golf Club and played off a handicap of 2, therefore 'must' have been a decent chap despite leaving me as a grass widow for weeks on end to the point that I forgot what he looked like in the daylight. Our holidays comprised driving mega miles to compete in the Coffs Harbour Championships. Easter was spent in freezing and soulless Canberra for the ACT Championship. I spent many a Sunday pulling a golf buggy during 'pennant' season in an attempt to seem interested in his sport but never, ever had the inclination to learn the game. It's something you do when you're retired, I told myself. Yet people go giddy over golf!

Why do golfers only wear one glove and who hits a ball with their legs apart and one arm rigid? Keeping your eye on the ball apparently is very difficult and the reason most beginners have difficulty connecting a bat that is way to small with an equally diminutive plastic, dimpled sphere with a bit of lead in the middle!

It is also mandatory to avoid all sense of colour coordination and dress abominably. You may also wear a stupid hat. Then lug a load of metal sticks around a manicured lawn and use them to occasionally slam a ball into at tiny hole so small they need to put a flag in it, called a 'pin' on a special bit of 'bent' lawn that nobody is allowed to walk on without spikey shoes and has obviously been cut with a sharp pair of dressmaker's scissors. Apparently, these obviously named 'greens' (whoever came up with that one had a vivid imagination) can be fast or slow but in all my caddying life I never saw one move at all.

I don't understand Ladies Tees, Men's Tee's and Championship Tees - sounds like a varied apparel collection . . then you can bogey (sounds like something better left up your nostril) . . .birdie or eagle. If you've got a long drive (no not as in a road trip to Brisbane) you can possibly score an albatross. Oh the image of snot and dead birds scattered on the fairway is too much to bear! Before you actually do anything you need to address the ball, clearly it knows not where it is to be delivered. From the Tee you 'drive', short shots you 'chip'. You come in over or under par and if you get a hole in one, the said ball is usually mounted on a plaque and taken 'straight to the pool room' for everyone to admire. "Oh look, a golf ball on a plaque - how impressive!" You can 'shank'and 'slice', 'chip' and 'putt' and if your ball goes in the rough it's hard to find. If it goes in the water, you need a telescopic ball retriever . . .and when they get dirty you need to wash your balls in a purpose built ball washer! If it's out of bounds you take a drop. It's the one place where Big Bertha is popular, you use an iron to hit on the fairway (I could probably manage hitting a little ball with my Philips Steam Shot) and a sandwich, I mean sand-wedge to get you out of a bunker.

Then, even if you do have a 'par' round, you come back to the 19th hole and describe every shot in painstaking detail whilst I look into the bottom of my glass and my eyes glaze over!The 19th hole becomes a refuge and ensures you're always late home for tea or asking the barmaid to fib when the wife rings to ask where you are. The trophies usually comprise a boxed set of bath towels, too small to wrap around a midget or something hideously domestic to bribe the little woman. When I got married, he had the Glory Box!

The one good thing about golf courses is no children . . .maybe that's its appeal. Ankle biters under 12 are forbidden! Nope, I know those who play it love it with a passion, but golf . . .it's for the birdies.
Posted by Baino at 5:41 pm

With you there. I reckon instead of playing all over again they should have to strip to the waist and bare knuckle fight to see who wins. I am not attending the golf day for the past pupils union of my school on Thursday because I cannot play and could not be arsed learning. I will however go along to the dinner afterwards because that way I still get to benefit from the networking aspect. Yes I am a cynic, but I am also a pragmatist.

The tortoise has either been incredibly unlucky or the crafty reptile is about to launch an attack...

Thrifty as usual, man after my own heart. Tell the truth, we had lots of fantastic 'social' events around the golf but tis true, barely saw the bloke in daylight during the big comps. As for dinner . . if it involves gastronomic delights, I'm up for it! Cheers and enjoy!

Ernest: I'm seriously hoping it was photoshopped! Although a golf ball fired from a reptile's bum would be more accurate than the few attempts I've had to launch th little white ball!

NOT this birdie! I've never stepped a foot or flapped a wing on a golf course *YAWN* Boring! This is the most I've ever read about it!

i did 2383$ worth of damage to a golf cart. True story. Here is the proof! http://ryaniam.net/golf.jpg

Anony: I just feel sorry for the birdies, eagles and albatross'

Ryan: WTF? They're not worth that much! What else did you take out! I also heard there was recon the other night(nothing escapes she who Facebooks) and I BANNED it. Next time I'll have to stay up and supervise you naughty boys!

I am not really into golf but the photo is funny.

Hey, i was sober! The main instigator of recon was your son, who left the axe up the back for him to find!

Golf is yet another sport that mystifies me completely, but people here are very keen on it. I know it's boringly PC, but golf courses use horrifying amounts of water which could be put to better use. I get a bit nervous on footpaths next to golf courses, but so far nothing's hit me on the bonce.

I'm not very sporty but golf and snooker/pool are the only ones I play. Probably because there's a pub invloved in both!
They actually do have kids day in most golf clubs (a day to avoid I might add)

Ropi: that it is

Nick: Our golf course (just across the road) is watered with recycled water from a dam bang slap in the middle of it. We're on water restrictions here. Out in the bush, it's not unusual to see golf courses with sand greens!

Quicky, yeh my bro's and son are very much 'casual' players and it has to involve alcohol before during and after! No kids at our country club! Even the junior members start at 12. Not so on public courses.

Ryan: You're such a dobber!