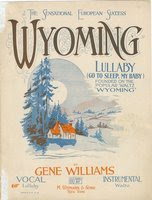 I've been painting today. Slow progress thanks to my decision to prepare properly and sugar soap walls, and spakfilla the cracks in the cornices, dust away the cobwebs and realise that I haven't actually cleaned right behind the toilet for a long time! This time I was careful and newspapered the windows and mirrors because I'm the next Pro Hart or Jackson Pollack. For some reason, whilst rhythmically sloshing the roller up and down (yes I put too much paint on it and ended up spattering my glasses), I began singing a lullaby that was sung to me as a child by my Grandma and my mother and father, and one I've sung to both my children at bed time:

Go to sleep my baby
Close your pretty eyes
Angels are above you
Peeping at you from the starry skies
Great big moon is shining
Stars begin to peep
Its time for little picaninnies to go to sleep
I wish I could find the tune's to show you that despite the rather odd lyric, they were sweet and gentle and melodic.

Now before you get on your politically correct soapboxes and complain about me using the word coon or picaninny - these were the days of the gollywog and nothing racist or offensive was meant. In fact I always assumed they were old slave songs but it seems the latter at least was written more recently and is known as the Wyoming Lullaby. They had sweet little tunes and were clearly written to aid in putting little ones to sleep.

Let me explain. My family has four regularly sung lullabies. They have been handed down through four generations. The first is the Alabama Coon one. . another "Go to Sleep My Baby" (more references to coons and moons) an old music hall classic, Lily of Laguna and another is an old wartime song "Who's Your Lady Friend" a slightly risque soldier's song about infidelity (She's not the girl I saw you with at Brighton, so who, who who's your lady friend?). Not your usual nursery rhymes or traditional lullabies but they were sung soporifically and had us in a comfortable sleepy stupor often before the last was finished.

Whilst these might be rather odd songs to sing to a baby - my family did. Routinely. Every night. All the kids know the words and the tunes and they are likely to be passed on to the next generation although I suspect the words have become shadows of their former selves in a perverse Chinese Whispery kind of way. I just wonder how on earth a lullaby about an Alabama piccaninny being threatened with the whip unless she went to sleep became family tradition! I and about 50 distant Welsh relatives, do own land in Louisiana, maybe there's a connection there?

Doesn't seem so obtuse to sing a lullaby about giant spiders then does it?

Okay I just wanted an excuse to play the Cure . . .

And a new Link Switch seems to have fixed my computer problems in the short term. Either that or it's just decided it prefers night shift!
Posted by Baino at 7:59 am

Isn't it funny where the mind wanders off to when you are sloshing paint .. Lady of Laguna and Who's your lady friend are ringing little distant memory bells for me. Thumbs up to the Cure ... would like to hear them do a cover version of Lady of Laguna*!*

'
Go to sleep my baby
Close your pretty eyes'

That was the last time I was told I had pretty eyes!!

Didn't remember the other lines though.

Singing a lullaby to a child is a wonderful, wonderful thing. Makes you feel all warmy-fuzzy all through.

BTW, that is my absolute favorite Cure song.

Bimbimbie I forgot another one Lula Lula Bye Bye . . must more lullabyish, must have brought that one on for those reluctant to go to the land of nod! Just found myself humming it whilst making a cuppa! Not sure that one's Robert Smith's cup of tea tho!

Aww Grandmama, you've still got pretty eyes! All the better to see me with!

Megan, you and I are becoming spookily alike in our preferences and lifestyle! I have a doppleganger living in CA! I think singing to children and telling stories is essential. Besides the great feeling and bonding you get with an infant, it's a worthy distraction when they're fractious.

I love The Cure Baino.

Great choice. You can be my 'eye test' any day!!

Did you know that I wrote the latest Refuge Of Delayed Souls post whilst listening to this song? I just LOVE it!

Anyway, back to the lullaby. Never heard the two that you mention so I do not believe that there is any Lancashire/Yorkshire connection LOL.

My father used to sing this one:

Heartaches by the number
trouble by the score
every day you love me less
each day I love you more.

Every so often he would add

Awww Paddy - you flirt. Once upon a time I might have been eye candy! Whatever you do don't go getting glasses!

So that's where your dark inspiration comes from Miladysa (I'm stalling waiting for the crack filler to dry . . .) Well my father was not adverse to singing al 1000 verses to "On Ilkley Moor bar't 'at" bored us to sleep!

When I was little Megan said, "Hey Annie wanna here a lullaby?" and she played that cure song for me on my playschool record player. I didn't sleep well that night!

I know a girl who seriously uses Sneaky Sound System (the sneakiest of all the sound systems) as a lullaby...

She finds I Saw a UFO oddly soothing

"i'm thinking of a little bumble bee,
won't my mommy be so proud of me?"

Awww Annie . .sisters eh! God help the sister and all that! My brothers used to throw darts at my sister so count yourself lucky!

Nothing wrong with Sneaky Sound System except they ripped off a Prodigy riff in their latest and didn't give them credit . .I was listening! Look you can sing anything with the right posture . . I've gone for the Proclaimers before now! Something about that 'da-da dat-da, dum diddle dum diddle, dum diddle dum diddle dum. . gets 'em every time.

Well kj I hope you liked the song. Two hours is some backseat concert. When we drove to Tassie years ago (yes we drove apart from the cross Bass ferry) we played ABC tapes called from Nought to Nine, as series of nine tapes which catered to the age group 0-9. They were fantastic, tolerable to Adults, sung by famous people and terrific kids songs. The only time I've surrendered my radio to anyone under 6'!

Awww Ces, I have no idea what it means but it sounds lovely! Tsup!Tsup to you too!

I remember being sung the 'go to sleep my baby' one, and singing it to my kids too! I used to sing them all kinds of things. OH didn't know many lullabies or nursery songs, so he used to 'doobie do' the theme tune to 'Dixon of Dock Green' and it worked really well! It was slow and rhythmic and soothing, and for a long time we only had to hum a few bars and his eyes would droop.

Sadly, he often woke as soon as we stopped! LOL!

To find out the melody of Alabama Coon lullaby, go to
http://www.youtube.com/watch?v=Q7sxKk66zhU
where my mother is singing it, filmed by her grandson, Billy Berger.