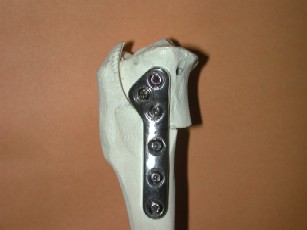 Well after having a general anaesthetic an x-ray and some serious manipulation, ThePrincess has definitely ruptured her cruciate and has bone degeneration in her left leg, this means a knee reconstruction (pic left). Whilst she's very sore she was hilarious when I bought her home last night, still under the influence of anaesthetic and wobbling about the kitchen, she kept collapsing and just lying there having a little think before attempting to jump on the bed. Unable to do so, I was forced to assist.

So what you say? How is this blogworthy? This my friends is no ordinary dog - this is my third child, my bedmate (yes, I share a Queen Size bed with a King Size dog) my littly pookie wookie schnooks. The vet wanted to do the op on Friday (13th) but despite my not being at all superstitious, it's a bad weekend - Birthday celebs anticipated dinner at ButterFly Girl's on Friday Night and another at Thommo's on Saturday and DrummerBoy arranging a BBQ with younglings on Sunday afternoon so no nurse at home to take care of the invalid. Then the vet is off to Paris for two weeks - what is it about bloody Paris, everyone's been there except me but that's a whole other story - so she's scheduled for 2nd November. I'm preparing my leave forms as we speak to take her first week of invalidity off to make sure she's comfy womfy. Don't even ask about the price . . . footballers don't pay this much . . . you pet owners out there . . . take out pet insurance before you need it!

Resolution for today: Remember that ThePrincess is a dog and that ClareBear and DrummerBoy are my children.
Posted by Baino at 8:41 am