If Acres Were Camels, We'd Have A Cup of Tea 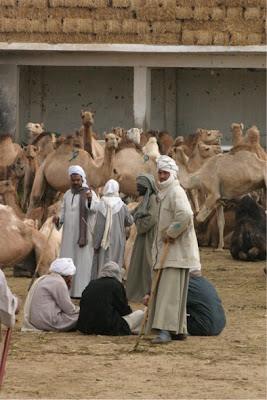 My Neighbours and I meet a developer in relation to our land sale.

If only we could trade land as easily and with as much integrity as you can a camel. You inspect it, you check it's teeth and it's udders, you make sure it's got a nice nature, a good curly coat and a solid hump. You argue a price on the spot, you stroke the dealer's hand and it's all over . . .off for a celebratory cup of tea and your camel in tow. Now real estate it seems is far more difficult and devious . . .

So a week after we receive and reject a pretty healthy offer under a cloak of secrecy and a confidentiality agreement, (for all I know everyone in the street was made an offer by this particular developer but isn't talkin'). Then, to our to my mind, modest 'For Sale' signs were erected. These are completely unrelated events but putting the pressure on the big guys nonetheless. My neighbour complains that the signs are too near his border and give the impression he's listed with the same agent. He is for sale mind you and could get a free introduction but nope . . has to be on his terms and he's not paying any agent's commission! He wants it all and he wants it now *strains of Freddie Mercury*. (He has the worst block in the street, thanks to a whacking great 5 line power easement going down the centre). So I've asked for the signs to be moved a little closer to our driveway making it clear that it's our block for sale - not quite far enough away from his boundary for his liking but the Acquire agent is being a bit cheeky and giving the impression that there are four blocks for sale not just two . . . then Foster-Greenwood rings me at work and asks me if I would sign an exclusive agreement for 2 weeks! What the? Two weeks? Clearly he's got another buyer and securing his 'comish' which is a healthy 2.5% of the sale price mind! I switched into Ice Queen mode and told him I wasn't up for signing an exclusive and the disappointment in his South African voice was palpable. I've virtually told him that he's out of the loop unless he fronts with something real and unconditional so he's tootled off with his tail between his legs - blithering on about council contribution tax and how difficult life is, just before sliding into his BMW Four Wheel Drive to pick up his 17 year old from The Kings School - *sobs of empathy* - Real Estate agents really are Hyenas and I don't trust him as far as I could throw him but this one has lobbied hard with us over the past 4 years so . . if anyone's earned their commission he has . . . Babybro is not yet convinced. I'll sign his agreement when he shows me the money! Whatever happened to Gentleperson's Agreements? Can't do anything any more without a contract and a condition, a caveat and a cave in and with four shareholders, that's not an easy thing to achieve.

Tonight, a meeting at Steady Eddies with another developer. It's very strange. Everyone is so negative that you feel for these guys. Instead of leaping onto the chandelier and yelling "Yes, I want to sell . . " they crawl into their respective shells and argue about Capital Gains Tax implications and settlements and what percentage the deposit should be. The developers talk about overheads and power lines, falling markets and water courses . . .It's like a game of Texas Hold'em only nobody's betting.

Am I the only person in the world prepared to get up and say "Look, this is what I want . . come back to me when you have a suitcase full of money? " Perhaps I'm naive but I don't want to waste my time with all this fluffy talk about options and potential or lack thereof. If I have to sit here for another 2 years, well I will. And by the turn of the decade (incredible isn't it, just 2 years away and we're a decade into the new millennium) housing will recover and the place may well be worth $8 million so buy now while it's cheap - suckers! Do you like my sophisticated sales pitch?

And that brings me to plain speaking. Enough of this shrouded talk and blithery innuendo. This is the problem with 'offers'. If you name you're price, you might miss out on something more. Greed is not good folks . . make up your mind what you want, put your cards on the table and accept if it's the right price.

I really wish I was a camel trader . . some hot and animated negotiation . . . two slaps of the hand and the deal is done! 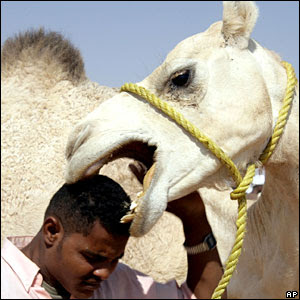 Variation on don't bite the hand that feeds you . . are you listening EDDIE!
Posted by Baino at 6:04 pm

I dunno, I did a course on negotiating and the key was to get as much info out of the other side as possible, and have a clear idea of exactly what you want. If you get what you want and someone else gets a bit more, you still have what you want. Why get bent out of shape just because someone got more? And if they rub your face in it, wee on their doorknob when they aren't in :-)

just back from "the meeting" now. They're opening up a bit and the other end are a bit more receptive but a still a room full of whinging bastards and quasi experts pfft to 'em! I don't want to be rich, I just want more than $15 in the bank at the end of the month!

Thrifty: Dead right! I'm already a bit bent out of shape but nothing to do with developers! Although squatting on a doorknob ain't my idea of a hot date! Can I wee on the kitchen floor instead!

Right, a drinky poo is called for!

Well the best I ever heard was hiding prawns in a hollow curtain rail (months of "Where is that smell coming from?"), but as they are going to move anyway....

Yes, when did property transactions, sorry flogging your gaff, become so bloody complicated? And clearly it gets worse when all these other people weigh in with all their nit-picking and obscure queries. It's a wonder anyone ever emerges the other end but surprisingly they do. Best of luck anyway, and quite right to want a nice wad of money upfront!

Thanks fellas. It will take time . .fortunately, we have the only council granted road access so they aint goin' nowhere without buying us first! Fingers crossed!

It strikes me that with your road you are in something of a position of power. Sounds like a good position to negotiate from. It's all smoke and mirrors and games ultimately. All illusion. But I suppose we must play our games.
Give 'em hell and be sure you're playing hardball, Baino.

AV: Definitely, it's just the waiting and grinding forward an inch at a time, day by day that wears me down. And being 'talked over' by friggin men! Why do they do that? Last night someone even hit me with a "Let me finish . . " while he laboured a point that had been well covered for about 20 minutes - grandstanding prick!

I read the third comments as "more than €15 m in the bank", then reread it.

Camel traders can always throw in a couple of wives as sweeteners! (I just read a profile of a photographer in Mali who has four wives)

You've got those developers well-sussed. I'd love to hear what they have to say about you - once you let go of their goolies!

Ian: If I had 15 million in the bank I'd shout you a ski trip to Austria every year! And thank you for that information it will come in handy ad dinner parties.

Steph: I haven't a clue in reality I told you I'm a Caramello Koala . . hard on the outside and soft in the middle!