It's Royal Easter Show time in Sydney. One of the last great Agricultural shows. I guess something like the Young Farmers on speed or an imitation version of US State Fairs. Agriculturally, it's wonderful. Beautiful produce displays, animal enclosures sporting every domesticated creature from Alpacas to literally Flying Pigs, Cows and horses etc. Smelly poultry, arts and crafts, cake decorating, painting and sculpture, knitwear and handicrafts, wine and cheese.

I never had any great burn to go to the "Show" but pushed by children who were keen to enjoy the crowds, we've been for the past few years on and off. Now as adults, I am liberated from the experience. The good? Introducing city kids to life in the country and getting close up and personal with the farming ethic. It's possible to poke a piglet, goad a goat, chase a chicken and follow the big animal footprints on the concrete which mark a path amongst the animal exhibits. You can attend everything from cross-stitch and flower pruning demonstrations to cows being milked and lambs being delivered, chicks hatching and cows being milked. Which is a good thing for kids who think that milk comes from a plastic container in a supermarket. Believe me . . most kids do!

It's become a little more commercialised over the years with manufacturers spruiking non agricultural products but it's essence remains bringing the country to the city and for the exhibitors an incredible source of pride if you win that blue ribbon for your boiled fruit cake . . yes folks, Australians make boiled fruit cake. There are more chambray shirts, Akubra hats and moleskin pants than you can poke a stick at . . the uniform that marks the country folk from those in the burbs.

At night, if you can get a seat in the grandstand, there's polo, precision driving, some novelty act, usually an unbelievably unemployable clown and a donkey that manage to get this one gig a year and something exciting like a high wire act, Rocket Man or a robot that breathes fire (told you, it's a class act) - I believe it's freestyle motocross this year. It closes with 20 minutes of pretty damn good fireworks.

The downside . . Sideshow alley and it's array of over-priced dodgy rides and showbags and an inundation of young teens in silly hats and wigs. It's alcohol controlled so no shenanigins although I can always smell weed, perhaps it's luscerne hay?

Then there are showbags. Once upon a time, showbags were various manufacturers' way of providing samples to the public. They were free. You could browse around an enormous hall of stalls and grab a free showbag with chocolate, toys, skin care, garden products for nicks, nada, nothin'. These days, they range between $5 and $20 are largely full of shit and it's the most crowded exhibition in the showground as people clamour to get their little plastic bag full of . . .well . . rubbish. My kids would be given $10 and ushered into the seething crowd, only to look at every damn bag in this massive steaming hot hall to emerge with the biggest bag full of revolting sticky lollies. There were times when the gluck had to be removed with something akin to paint stripper from DrummerBoy's face. Show bags always contained something
to help the kids spew in the car on the way home.

Other downsides . . exasperated parents pushing over tired toddlers in the pouring rain or stinking heat (Easter is always extreme), screechy teenage girls with stupid things on their heads or in their hair, the food . . dagwood dog anyone? Yuk. I was the tight arse parent that packed a rucksack with sandwiches and juice and the only luxury maybe an ice cream or a tub of chips later in the evening. After last 2006's Good Friday effort at the show where 2 million people attended on a 30C day, I called it quits. Never again! Not never, no how! I'm done with the mingled essence of poo, frying fat and sticky lollies!

But it is an institution and at $30 a head per adult, it isn't cheap. After 16 years of dragging my lazy arse through the muck and the mire, I'm quite happy to watch it reported on telly but if you have littlies who aren't afraid of fireworks, (I spent many a year cuddling my niece or nephew who were terrified of the things), it's a good day and night out and I think fondly remembered by the younglings whilst abhorred by the parents! 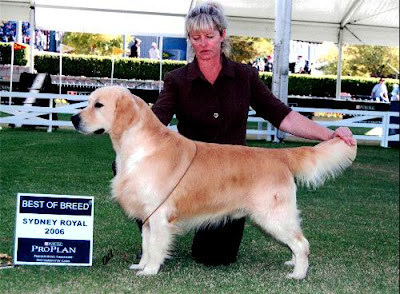 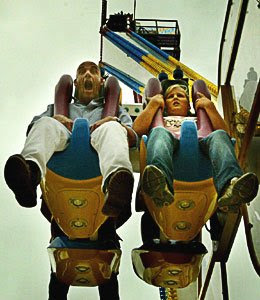 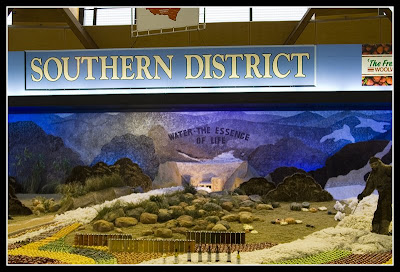 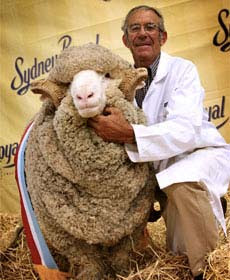 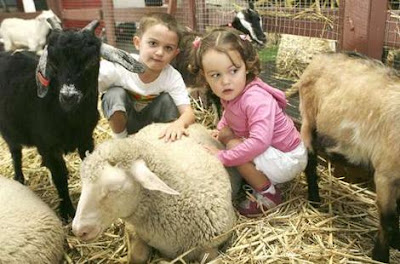 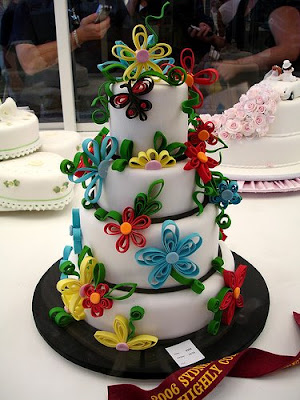 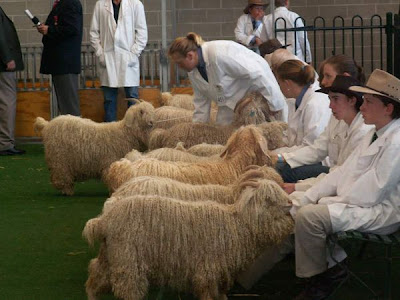 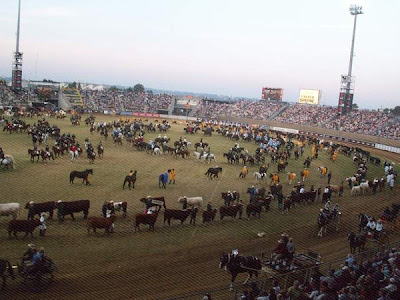 Sure it's not a proper day out of the sprogs don't barf all over the back seat! We are just back from Glenroe open farm, the kids got to hunt for easter eggs, see lambs (not being delivered though and molest some unfortunate rabbits. All good fun. No barfing though.

Been there got the tee-shirt and the grey hair. Somehow it was easier than Karioke at the Students Union! My Elly sure can never complain about me not doing things.

Sounds exactly the same as the annual agriculture show they have here too. I went but since I spent many summers on a farm it wasn't exactly an educational experience. The indoor enclosure stunk of animal pee & poo. There was a wine tasting so i spent most of my time there!

Thrifty: great day/night out it is if you can avoid using the porta loos!

Grannymar: the things we do with kids! I'm sort of glad that's all over although now I have young nieces and nephews and today have to hide a bunch of hunting eggs without three labradors scoffing them first! Yep, I think I've seen my last Easter show until the grand kids come along (bloody hell now there's a thought!)

Quickroute: We went once and the wine section was right at the entrance. I think it's the only time I've been tipsy at 10.00am!I do like to watch the skateboarders and motocross rather than the animals but being horsey types, we have to spend HOURS looking at other people's ponies!

Aww! I miss the show!! Although I think I´ve seen enough alpacas to last me a lifetime!!!

Hey Nellie, Wanna go to the Show next year....Ha Ha

ClareBear, I'm with you but not like that hot Good Friday . . if they limited the crowds it might be a goer.

Babysis: Maybe if I dont have to block the ears of NaughtyNeph or Maddie!

the only decent thing about the show now is cheese on a stick. oh and they have a bar this year too. still not going tho, over it in my old age.

I tried shearing a sheep once, and it's a lot harder than it looks! Even harder if you're trying to get the whole fleece off in one go, which is the ideal. What always amazes me about sheep is the way they scamper up and down mountainsides without ever falling down, despite being so top heavy. How the f*** do they do that?

Would love to have been at the show. we used to go to the Balmoral Show in Belfast when I was in a country parish, but it would be tiny in comparison.

Garrison Keillor describes such a show in Minnesota in one of his books.