What do Chromies, Farts and Garlic Have in Common?

I'm at home with a headcold today, brought on largely by TMAPITW invading my half metre personal space and sneezing all over me last week. I chose to do the honourable thing and not inflict the same illness on my work colleagues so I have little to do other than, sleep, blog or watch Daytime TV. I've had some time to think and mull.

The upshot of all this snotty cerebral activity? I have to brag a little about my son. Without ClareBear here I've had the chance to focus on him a little more . . to converse and play. He's rarely home for prolonged periods these days but when he is, it's nice to have the two of us and to engage in conversation or just sit and watch a DVD. He's a fine independent man with a strong moral sense and opinions which often differ to mind but for which I have respect.

As a child he was placid, easy, playful, affectionate and constantly dirty and sticky with dribble perpetually coating his toddler chin due to raspberry engine noises propelling him on a variety of tricycles and scooters. He would fall asleep on any moving mechanism from swings to jetboats. I once had to shield him with a piece of plastic as we sped along the Namoamoa river in the Fijiian highlands, in an outboard canoe if you please, so that the spray wouldn't wake him up! His chin dried up when I introduced him to playing cards and clothes pegs on the spokes of his BMX and later with the purchase of a Honda Motocross bike with no muffler! He played soccer, tennis and baseball as part of a team. He obligingly went through the sacriments at a Catholic primary school. He never excelled academically but he did what was necessary to the point that he was one of only two graduates who passed his Bachelor of Horticulture course.

As a working mum, both kids had their share vacation care centres and tennis camps to keep them out of trouble whilst they were on holiday and I was working. No complaints although I know they didn't like it.

He was rarely troublesome - well apart from that incident where they were stealing 'chromies' off someone's bike and the police had to be called.

Skull chromies . . worth stealing apparently and favoured over bullet chromies
Oh and that time when he was busted doing doughnuts in a cul de sac in his mother's car and that time . . . well you know what I mean.

Apart from the odd explosion and combination of combustable chemicals, he's never been destructive. Although there was that one time where he was having a huff and kicked a hole in his bedroom wall at 8 years of age . . .tantrums have been few and far between and usually involved one of those 'rides' outside shopping centres that eat your dollar coins. He objected to my refusal to pay so he could receive a 30 second jiggle in Postman Pat's delivery van.

He's been left behind without a whimper when ClareBear and I travelled in 1995. My father was disgusted with me but it was the fulfillment of a childhood promise for her . . I would have done the same for him but he preferred skiing so he had his holidays in short breaks over a longer period of time.

Since age 16 he's worked as a casual and through his holidays for MacDonalds, Coles (in their freezer section without parka), pulling data cables through dirty roofs, labouring for plumbers and 3 years lifting 20litre drums of Chlorine and 25Kg bags of salt for an absolute pittance. He's at work now . . .digging trenches and breaking up concrete for a plumber. He's exhausted but driven.

He is an extremely fair and attentive boyfriend to our lovely Fringelet. He's loving without being maudlin, he's romantic and sweet, cuddly and playful but practical and pragmatic. He is funny and still has a propensity for incredibly annoying noises, now exercised in a baritone rather than a squeal or exacted from some other orifice that defies mention. He is an accomplished musician both on the drums and in his ability to produce farting noises from his underarms and elbow and can converse with anyone from a 3 year old to a 90 year old with reasonable intelligence.

He has a sense of obligation and no qualms about putting out the garbage, maintaining an oversized swimming pool, mowing acres of lawn, weeding pretty much whatever I ask him to do he will do . . not necessarily right away but it does get done.

He's a sturdy companion and a thoughtful lad and his pasta and curries are legendary! Although I could go a little less sweet chilli and garlic in pretty much everything. 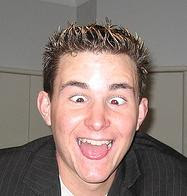 I think you qualify for the "proudest mum I know" award.
Do you wanna be my mum?

HAHA, I'm going to have to try really hard to think positive thoughts about my boys! Hope your feeling improved healthwise, after a day off :)

Rainbow Lorikeets feeding on Grevillea in your photo stream! THUMBS UP!

Fair play, sounds like you did a good job. Fingers crossed that I can speak as proudly of my girls in 16 years time (I'm pretty confident I will, they're good little bears).