After finding the remains of Ned Kelly in the grounds of Pentridge Prison this weekend, once again Australia's larrikin bushranger has been in the news 127 years after his hanging, decapitation and burial in a mixed grave at Old Melbourne Gaol, then subsequent exhumation and reburial at Pentridge.

Ned Kelly was the son of a convict, an outlaw, a horse thief, a bank robber a rabble rouser and a convicted police killer. Why does he loom so large in Australian history?

Mind you, our Ned has barely left the news. His life has inspired artworks, (Sydney Nolan's collection comes to mind), movie renditions, plays, poems and novels. Recent efforts included a movie starring Heath Ledger and Peter Carey's 2001 Booker Prize for his novel The True History of the Kelly Gang (which was of course a brilliant piece of fiction)

Ned Kelly's story can been seen as one of a poor boy of great skill, devoted to his family, wronged by the police and the legal system and - following a tragic series of events - executed at the age of 25. Or is it the story of a thug, born of an Irish convict who despised any form of authority. A common horse thief and bank robber who's only claim to fame was that silly iron suit! And a stunning death mask! 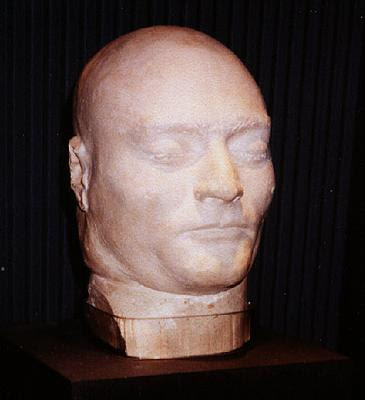 Some feel it is a strongly Australian story with Kelly as the archetypal Australian challenging authority. Some see him as a Freedom Fighter . . the Chez Guevara of the Victorian bush . Was he attempting to spark an uprising?

According to some he was a murderer and a cattle thief elevated to hero status by a public looking for a hero. He was a killer. He used the innocent for his own ends, taking hostages in shoot-outs. Four townspeople were killed in the Glenrowan shootout when he was captured.

The story of Ned Kelly has become a source of myth, and sometimes the narrative leaves out important facts. The stories and films that focus on his life build on the myth. In his book, Peter Carey imagines a daughter Kelly never had; the film featuring Heath Ledger invents a romantic interest.

Other interpretations use facts to paint a different picture. One view suggests there was sympathy for Kelly at the time of his trial and execution: a petition for clemency gained 32,000 signatures in Melbourne from a population of 300,000.

Some commentators say that we need to consider the Kelly story in a broader context. They claim that Ned Kelly was a victim of his circumstances. He lived in a society of inequality between rich and poor, country and city, Irish Catholics and English Protestants. In the Jerilderie Letter Ned Kelly described himself as a defender of the oppressed and a "widow's son outlawed".

My mind's made up. The Jerilderie letter certainly reeks of uprising and political Agenda . .but then he was Irish in a British colony so that's to be expected. Either way he came to a sticky end after just 25 years of life, was decapitated, a death mask made and buried unceremoniously only be be exhumed twice. . .poor old Ned. . I hope he likes his next resting place in the 'memorial rose garden' adjacent to the shopping precinct about to be built on his last! 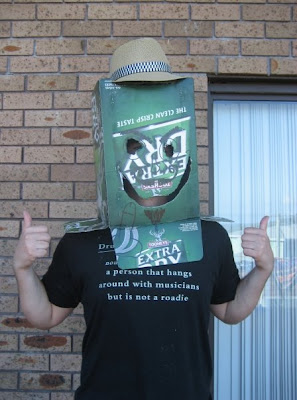 Get out of denial you parents of younglings . . this is what they grow into!
The reason for the mask is probably fodder for another post!
Let's say it involves alcohol and playing cards
Posted by Baino at 7:29 pm

I remember reading about Ned Kelly when I was a kid in England in the 1960s. It's strange how such an unusual character has had such an enduring appeal.

You forgot to mention the Jerilderie Letter is 56 pages long and he doesn't breath to make new sentences! HAHHAHAA. Blah. I like your new version of Ned Kelly :)

We had a song about him: kelly the boy from Killane.

I could have done with that headgear last week!

LOL is that drummer boy? That's so stupid and daft-looking I love it.

He's quite the hero here althought I suspect he was a thug.

Anony: I haven't read it all, just loved Peter Carey's novel. Maybe later when I have time. Ah, that's what happens when you play Kings, someone gets to be Boxhead and is pegged with bottle tops.

GrannyMar: He was actually born in Victoria but his father was convicted of stealing two pigs and 'repatriated' to Tasmania. He actually was born in Killenaule in Tipperary.

TMc: See above .. card game called Kings. The loser has to drink a load of slops collected throughout the game. One of the 'penalties' for losing a round is becoming Boxhead.

I love the photo! I seemed to remember Ned had a Jesse James reputation - brutal but somehow idolized by the people.

1.) Who did the artistry with Tooheys Extra Dry box? - very Halloweenish!

Welcome back 'rooty'. That my friend is my son during a drunken weekend at Fingal Bay on the central north coast. I'm sure he did the artwork. However, one does not want to become 'boxhead' . . .I never ask how much he drank, lost or fell over . . safer that way!

check out the penis in the lower left hand corner lol

Ryan: What on earth are you talking about? Nudity on the brain. You're banned from Fingal!

Hahahahaha. Reminds me of my university days wedged between TheBoss and Malones listening to Rebecca what's her name talking about socialism and the 'extuuurnal Wuuurld". .they used to draw knobs on my lecture books because I was seriously taking notes between two wankers. I wish I'd kept them! The books, not the wankers . . now I work for one of them . . the wankers . . not the books