Got ya thinkin' haven't I. This week has been in no uncertain terms bizarre. It's been a week of insecurity and redundancy at work, friends in crisis, friends with flu, friends being published, kids having birthdays, car crash payments, car hunting, car pooling, pouring rain in the middle of summer and arranging for horses to be returned to their rightful place in my back yard. It's been a week of too much drinking, broken cupboards and me collapsing in emotional outburst because I have 1.5 unemployed people living in my house, soaring credit and no cash and a shed full of spiders . . . am I making sense . .God no . . . I really do Thank God That It's Friday . . .so instead of a fuckwit (sorry just love that word), we're going for Stuckwits.

FIREFIGHTERS (Ooh please Father Christmas, if you love me at all . . bring me a Firefighter! Although Crispy has threatened to send me strippers and toys for Christmas which might be OK) were called to a bizarre rescue mission at a Northern Territory shopping centre after a little boy climbed up the prize chute of a claw arcade game and got stuck inside with the toys. The really entertaining thing was it's all on CCTV . . the little devil just climbed up the chute and ended up with the fluffy bunnies he was only 2 and a half bless his soggy nappy.

A six-man crew from the Palmerston Fire Station rushed to the nearby Oasis Shopping Village after receiving a call that a child was trapped in a toy vending machine at 3.25pm on Saturday 6 December. Shoppers watched on - most of them trying to control their laughter - as the firies used the jaws of life and then a hacksaw to cut the padlock on the machine.

The firies (affectionate term for Fire Fighters God Bless their Calendars) then had to pry the glass door open - all while the boy's parents stood by trying to calm him down through the glass. One onlooker told the Northern Territory News that everyone found it "extremely amusing".
Senior firefighter Brendon Magnoli said it was "definitely'' one of the most bizarre call-outs he had to attend in his seven years on the job. "We certainly don't get these often,'' he said.

Well in trying to find an image for this little event apparently it's not uncommon . . enjoy. We're off to the Outlaws for the weekend and an early Christmas, not before time I might add! 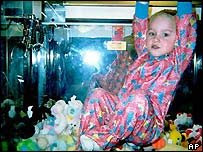 Whoever dressed that child needs to
be locked up in a fluffy toy vending machine! 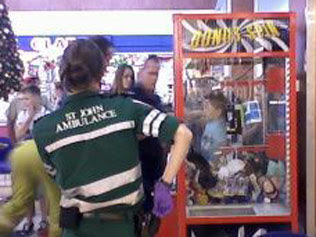 Our own little shute crawler 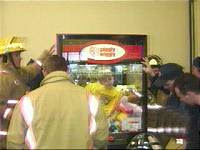 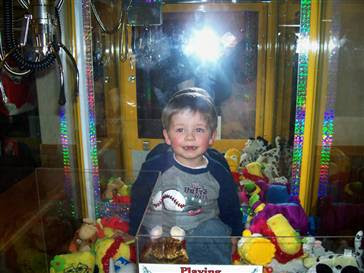 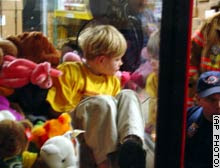 Bit of a squeeze? 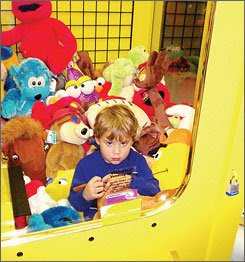 Finally, look at the expression of surprise on the Blue Bear!
(the kid looks less than impressed)
Posted by Baino at 7:46 pm

Ah firefighters. Do I know them! They are all loaded with testosterone. I always loved it when a patient was brought in with a pumper truck rather than the usual ambulance. We got busy with the patient but always managed to ask as many questions as possible to keep the firefighters in the trauma room. Recently our building set the fire alarm. Someone burnt popcorn in the microwave. We had to evacuate several storeys. Some of us went down to the cafe where we continued working remotely via the wireless system. I was discussing a problem with another analyst and in came the firefighters. Our animated discussion stopped as we both gawked and swooned over the firefighters. Here of course there is nothing more American male than a firefighter! Damn! I wonder if OSHA will let them answer a call with a hard hat and bare chest! I am getting weak...

Ah! A man in uniform does it for all the girls!

Have a blast at the weekend, and bring back some gos!

ROFL!! That's just the sort of thing my boys would have done if I hadn't been so paranoid about watching them, I developed at least two pairs of eyes in the back of my head!

As it was, neither of them ever did fall down a well (sorry, Lassie), get abducted by aliens - or crawl inside a floofie dispenser!

Firefighters, eh? Did you know my early case of JDOCD was fuelled by an off-topic thread on a greyhound board, which began with a group shot of bare-chested firefighters? The thread was called "Who needs cheerleaders?" and it was soon taken over by people posting pics of Johnny. I nearly got banned over it. LOL!

Forget about the stuffed toys, what the parents should do is train them to crawl into the ones that have the Xboxes and PS3s in them and pass them out through the chute. Stash them in the car and then call the fire brigade.

Haven't had much experience with the firefighters except a couple days after 9/11 when I shared a pasta meal with the last NY fire ladder to get out of the Twin Towers in one piece.

It's the policewomen for me.

Firefighters to the rescue, eh? Is it too harsh to suspect Mummy of slipping the kid a fiver to go up the machine?

....or of my doing the same, on our next trip to Supermac's? LOL

Seriously, did NO ONE in the mall have a key to the padlock--was there no maintenance telephone number on the machine? Wouldn't that have been simpler?

and, did the kid at least get to keep one of the floofies??

The photos are marvellous: I loved this!

What is it with women and firefighters? - poor little mite he'll never go to an arcade again

I think they should have been made to keep trying to 'win' him out... if they got a cute bear instead, I would have taken that home. We all know the machines are rigged.....

Firefighters don't really do it for me, but these pictures were hilarious! Thanks B and enjoy your weekend (rain forecast here - boo!).

It's good that you still found something to make you laugh at the end of a rubbish week Baino *!*

... drat, somethings wrong with the Get Up petition - postcode box not allowing you in, will try again later*!*

lol... you aussies need to be introduced to the 'newfie wrench', aka sledge hammer, opens damn near anything in one hell of a hurry ;)

arrest the stupid parents of that kid for child abuse! grrrrrrr

Laughingwold, do you have kids? Child abuse? What about Parent abuse or at least give the kid a medal for being rambunctious. Baino, this is perfect for Illustration Friday's theme.

Ces, you're hilarious! And wicked!If only they looked that gorgeous. The ones who 'attended' our Bonfire and gave us the fire permit were well . . less than handsome but they did drive the truck up the driveway!

GM: Not sure about Gos, it's bringing back the neddys, some fencing repairs then off to the Outlaws! Fun and games!

Jay I actually wondered where the parents were but the cctv shots on the news of him doing it was about 3 seconds. He was in like a flash! I couldn't find anything on You Tube or I'd have posted it.
Nearly banned! Saucy devil1

Jack . . they come off the back of a truck don't they? Behind the pub . .divvied out by men with names like 'Thunder!'

Ahh TCL, so women in uniform do it for men? I had no idea! Perhaps it's the handcuffs.

Makes you wonder Susan! Maybe they needed to free the lad in a hurry although he looked quite happy in his 'cage'. Pretty decent babysitter tho? "Here kid shoot up there and wait for mummy!" I do know someone who once they heard an announcement that their 'lost' child had been rescued by centre management would finish her shopping before claiming the kid!

I dunno Quickie, he looked pretty happy on the news! Women and Firemen . . it's the calendars man, the calendars! (What is it with you and Argentinian bottoms?)

Thanks Megs . . frankly if it breathes I'm up for it. Sunny and 34 here today . . rain has cleared. Why? Because my in laws will insiste on a hot traditional lunch where we'll all sit inside with the fans on full bore, sweating into our pudding!


Bimbimbie, I'm usually on a high on a Friday (although today my washing machine pump has given up and the kitchen's full of water!) Go to the Get Up site and you can grab the code from there.

Hey grumblebum . .seriously he was in like Flyn! Quick as a flash ...poor parents barely had time to get out of their chair (was in a food court)

Hehe . . tis too Ces! Don't be too hard on the Wuffa, he's buried in snow and his car's broke!

LOL!! These are fabulous! Those damn claw machines are so frustrating, it's no wonder multiple kids have jammed themselves inside them. And, happy "birthing" day to you the other day! :)

His Mum had to spend 20 bucks getting him out - as a writing exercise I wrote a short story yesterday about a kid who got stuck in a vending machine but he was too ugly for the media to care...it wasn't bad, and the Andy Lee cameo was just great...

who could have imagined the existance of all these photos of glass-impaired children? all i think are boys, which from my observation of mr. ryan, makes total sense. as for firefighters, i think 70% of the appeal is the strong i'll-take-care-of-you uniform. even for me!

ps hope the week calms down for you.
:)

LMAO - oh the things kids get up to! Those expressions are priceless - and the blue bear, I think, as the most apt expression of all!

Hmm, firefighters, can't say they've ever done it for me - perhaps because the one's I've encountered here are such a totally scummy bunch. A girl I worked with went out with one... and we'll say no more on that other than... urk.

my kids are now adults, ces... at least legally

if those two 'parents' are too stupid to look after their kid, they should not be allowed to breed

Oh Wolfy come on. People make mistakes. (I can't believe I said that!) I do agree that the parent of the child wearing that pink monstrousity ought to be arrested for lack of fashion sense. Keep warm Wolfy. Heheh. Baino is not here. Let's trash her blog.

For me, my Biology 5 was quite bizarre.

Bonus points for using a Pink Floyd song title in your post.

Baino, I have a special thanks for you on my blog.

man, how come I never got caught up in one of those things?