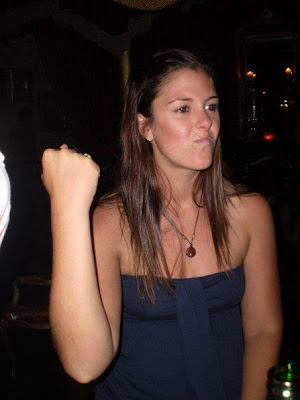 Confident, self assured, well travelled . . no longer a kid . . .
and not too big for a hug . . .the kid turns 24 Yessssss!
We've been pretty busy for the past 3 days, catching up, running through photos, anecdotes, travelogues, birthday and Christmas shopping and entertaining friends. So apologies for not having the 'Wonder Wall' up and running, might be closer to next week due to my having had three days off this week and a flurry of activity around Clare's return.

Today is her birthday. She is 24 years old. Seems just a flash since I was asking for an epidural with my husband hitting the deck when he saw the size of the needle! It seems barely a blink since I was elbow deep in toddler poo. And as if hardly a moment has passed since I was chronically wiping sticky fingers with Wet Ones and watching her ponce about in front of shop windows oblivious to the world around her . . . all that thankfully is past me and now I just have to lock the fridge and hide my booze. Yep, she's back with a vengeance. Tonight was a low key affair, just a quiet dinner and lashings of passionfruit cheesecake. The jet lag is actually catching up and she's hit the sack.

She was born in a year which was more familiar as a book title - 1984. A novel which depicted a grim and controlled future. Now it's ancient history as we embark on the naughties.

She who travels a lot was born at 5:30pm on the 4th December
Australian Medicare, socialised health came into being
Advance Australia Fair is proclaimed our national anthem (although we all prefer Waltzing Matilda)
Aussie banks were deregulated
Bob Hawke was Prime Monster
The Federal Budget was televised for the very first time
The 'one' dollar coin was introduced
Western Australia abolished capital punishment
Green and Gold become our National colours
We appointed our first sex discrimination commissioner (I always thought she should have been our first anti-sex discrimination commissioner)
We decide to sell yellow cake overseas and I'm not talking Victoria sponge
Love is a Battlefield, Girls Just Wanna Have Fun, 99 Luftballons, Eat it, Careless Whispers and Like a Virgin were on our radios.
The first Apple Mac went on sale
Torvil and Dean took out a perfect score for Ice Dancing in Sarajevo - who can forget Bolero?
Virgin Atlantic is born and Richard Branson became a household name
Band Aid Release 'Do they Know It's Christmas'
The Summer Olympics were held in Los Angeles
United States President Ronald Reagan, during a voice check for a radio broadcast reminded us that Bush isn't the only president with foot in mouth disease by remarking "My fellow Americans, I'm pleased to tell you today that I've signed legislation that will outlaw Russia forever. We begin bombing in five minutes".
Union Carbide kills 2000 people in Bhopal with a methyl isocyanate leak
Crack becomes available in the US
Desmond Tutu wins the Nobel Peace Prize
Indira Ghandi is assassinated

Heading off to boarding school. Enjoying a seriously hot summer.
Generally being a happy kid.

Happy 24 years of motherhood to Baino!

Where was I in Dec 1984.. making packed lunches for 6 year old ikkle Elly, and being eased into Jack's retirement from work.

i was but a twinkle in my parents eye

I was 18 that year, and left home for university...BLISS!

I don't remember much more than that however, beyond the smell of hairspray (remember our hair???) and the new-found taste of tequila.

1984 - I was saving lives in the ER during the day; dating three men at the same time at different days of the week and not one of them suspected; received three marriage proposals; dining at Tavern on the Green and dancing the disco at Studio 54 on Saturday evenings; got mugged by a black man in front of a bank; and was my most prolific painting year.

Congrats to both of ya!

The great communicator sounds like smarty pants compared to junior in the White House right now.

Congrats to both Mum and She Who Travels A Lot.

It's hard for me to remember what I was doing in 1984. Oddly enough it's the song titles that stick out most in my mind--in spite of MTV having been around for two years at that point I think 1984 was a major year for music videos. I remember having a discussion in music class about whether music videos were an art form.
That was also the year I made a plexiglass pen holder in shop class.

Ah Thrifty the best years of your life my father used to say . . I begged to differ!

Packed lunches eh? I thought you had school dinners.

OK youngling. That's enough. Enjoy it while you can!

Ah the schoozzy hair. I was fashionable then! My poison was Keiser Stuhl Rose and it doubled as paint stripper.

Wow Ces! An eventful year and I'm glad you weren't contemplating three men at the same time. One's quite enough! Studio 54? How very trendy of you. Good to see we're still mugging after all this time.

Rev you're just a young pup!

TCL I haven't actually watched the news for three days! Is he putting his foot in his mouth already?

Christopher you're a man of many talents, you never know when you might need a plexiglass pen holder! Yeh I remember MTV and it's poor cousin here "Countdown" compulsory Sunday evening viewing. My first music DVD was actually Play School! Bought that in 1984 too!

Ah Ropi, you were another 'twinkle in your daddy's eye' as we say! Yep it's not a bad book and quite easy to read in English, you should give it a go.

I was 15 and wearing lots of bizarre clothing and going to lots of dances and dancing bizarrely.

And I was TOtally in love with Duran Duran's John Taylor.

I was in my first year in high school. Wasn't allowed to go to birthday parties or nights out. I was playing volleyball. Snubbed my first could-have-been boyfriend, with whom I have fallen in love a few years later, and I was snubbed right back.
"we are good friends right?" what was I thinking!
I also went to my first overseas trip with my volleyball team, to Czechoslovakia. My first international match experience, missed the first serve after going into game because my knees went jelly. (I was the youngest in the team). Like Megan I was in love with Duran Duran (the whole band) and Queen.
Wow, your post brought back some memories!
Happy 24th Birthday Clarebear! Many happy returns. :)
Happy 24th Mumsiness Baino!
Gx

Happy Birthday to Clarebear and happy birthing day to you! :) Wow ... that list brought back memories. I was a Duran Duran obsessed 12 year old, who would wore the coolest purple canvas shoes (with checkered shoe laces) to the bus stop despite it being 20 below and my toes were about frozen -- the 80s were all about style, baby! :D (or lack thereof ...)

Miladysa said...
This comment has been removed by the author.
9:04 am

Oh my gosh--do you like ice dancing and all things invoved with figure skating?
I remember Torvil and Dean AND Bolero---fantastic!!!
By the way, you have one beautiful daughter there my dear.
Wow!!!
She is stunning.

Hmmmm 1984? I was a young teen terror having just discovered The Smiths. Property was theft, Meat was murder and Morrissey was the androgenous GOD.

I don't remember what I was doing. I was twelve, so I was probably hiding in a locker somewhere. :)

1984? the height of my career. self employed and a big cheese. a precious 7year old daughter. a year into a sustaining relationship. a know-it-all.

Megan, I thought you were a goth? Perhaps not if you liked Duran Duran . . gotta love the 80s dances . .. they're nana dances now! (Pity all I can do is disco and the 80's shuffle)

Haha poor Gaye. Strict upbringing hey? Is that why you're a wild child now? You're a sporty little chicka! I'm a Queen fan too . . .was lucky enough to catch them live before Freddy became ill.

Bear . . my mother was the skating nutter but that was a particularly good year for ice dancing. Lovely. We watched it religiously. (Actually we went to see them when they toured here a couple of years later and they still 'had it'). Erm Clare takes after her father.


Shit Jack! you must have been a shitload of fun! Still fit into your skinny jeans?

Awww . . .JD . . bullied were you or just have a hankering for small spaces?

Ah the zenith of your career path kj? But were you happy? Sounds like you have it far more together now!

Happy Birthday to Clarebear and I wish it to you too Baino - it's been 24 years of love, worry, trust, worry, laughter, worry, fun, worry, expense, worry....

Hmmm 1984 I was sixteen years old with a homemade Howard Jones haircut, a 'Frankie Says Relax' t-shirt, an unfun holiday jobs cutting apricots during the day and babysitting on the weekends and obsessed with the book 'The Outsiders' and it's star of the movie, C Thomas Howell, who didn't exactly go on to do greater things....