So, Babybro who coaches an over 35 Footy team who are now all married, kiddied up etc. Has the 'weekend away' at home because the various wives of said over 35's won't let them play away so to speak. "They're coming at 11am and we're partying hard until the wee hours" he announces. Trust me, it's 10.00 and they're all pissed as farts waiting for the little women to pick them up. It will be all over by midnight. Actually, I can hear 'female' voices which means a couple of the 'girls' have already turned up to pick up their belongings.

However, the 'ladies' of the house, aka Stressany (Sister in Law), Clare and I decided not to hang around while the golf putting, pool bombing, poker playing bunch of testosterone laden blokes have their celebratory day and headed into the city for 'lunch'.

It was hot today, very hot. We should have had an inkling that things were going to get weird when we missed he right lane and ended up in the harbour tunnel. An accident ahead and Big Brother on the radio advising us to hit the right lane. Seriously, normal transmission is interrupted by a spooky voice telling us to avoid the lane with the amber lights . . .and to merge into the right lane 500m below the harbour! Stressany's in need of a brown paper bag.

. . .and so, we headed to a harbourside restaurant called The Waterfront (there's that Australian ingenuity again) in anticipation of an ocean breeze.

It's a harbourside restaurant with sails above us and neatly laid tables. Normally there's a sweet breeze waving through but today, they had the fans out. Big blow your ears off movie fans. It was SO HOT. We did however have a fantastic seafood lunch before stalking The Rocks Markets 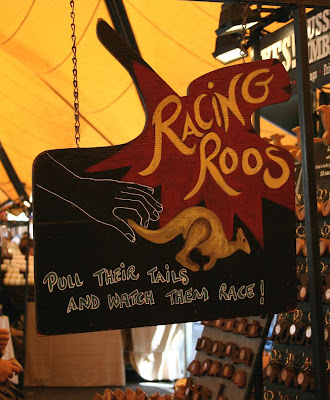 and plonking ourselves next to a massive cruise ship at a bar also adequately named Cruise. Which blocked the normally lovely view of the Opera House and ferries drifting in and out of the key. So, we drank in the sunshine and a nice Bortolli Chardonnay, until the call. 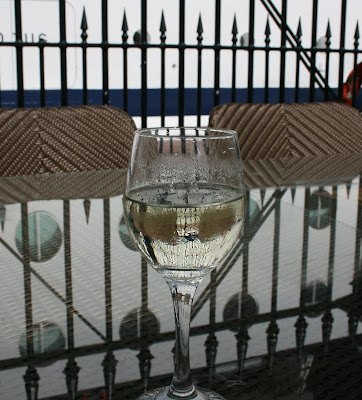 So we came home about 5ish. Heard the tales of woe, (poor kid was visibly shaken hours after he event and worryingly in need of getting the whole thing off his chest). We're wondering how to get him back on the road (given that Clare's unemployed, I'm cash strapped and thanks to an electrical fault with the Corolla, we're reduced to one working 15 year old car) Poor baby was shaken and stirred but alright, alive and well and amazingly surprised that I am not angry. Why on earth would I be angry? He's all in one piece! Funny how kids anticipate your reactions. 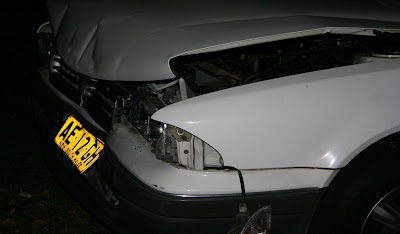 We have a few drinks. Put up our Christmas lights, lament the death of the Magna and work out how to deal with the Negligent Driving charge (if you run into the back of someone it's automatically seven points and a neg driving charge). We talk about how we're going to find the money for the excess and keep him on the road so he can earn his living and I wish I hadn't done my Christmas shopping early and spent my small savings cache. He calms down, we make spaghetti boscaola and watch Ricky Gervais "Animals" stand up.

Whoosh . . .what a day. Anyone got a cheap ute? Believe me, I don't know how we're going to get him mobile but the solidarity of my tiny family has heartened me beyond belief this evening. There will be a way to get through this. Clare's talking about sacrificing her NYE holiday, I'm thinking about a second job, Stressany has offered the loan of her car . . .but right now, I'm hoping for a little windfall . . I'm buying a scratchie tomorrow and hoping to God that I win $25,000.
Posted by Baino at 11:20 pm

Baino I am sorry to hear of these woes. Thery never seem to come in ones!

Thankfully you are all safe and well.

Oh, the poor dear. I hate that law; it's terribly unfair, especially when some moron pulls out in front of you or brakes suddenly for something you can't even see. I hope that somehow it all comes right again, and that he's back on the road soon (and feeling much better!)

Good luck with that scratchie!

It's unfortunate but the main thing is that Adam is unhurt. He's lost his transport but then that pales into insignificance when you consider what might have been!

And at least you got your seafood lunch in first ;-)

Baino, I am sorry to hear about all the bad news. I wish I could offer more but right I am depleted. Take care. Shit does happen everywhere and I'm all covered with it.

At least he's safe and sound.

Chin up lass and pour a glass or make a brew. It'll all look better this time next week! x

Oh Baino, I really feel for you and for Adam. My mother literally ran her car off the road, totalled it and got carried out by the ambos on a board and STILL received the charge for negligent driving!

Love Chunks is sitting beside me, and quite sensibly, is saying that the police have a duty to note negligent driving (esp in my mum's case) but.... I feel for you in terms of the cost, the worry and the inconvenience.

Thank god both your kids are at home and you can have a chardy, a hug and put up some chrissy decs.

I stopped calling my dad after crashes, he always tsks and says 'what did you do now?' before I get the chance to say I'm not liable.

I've never been liable (touch wood), I've no idea where he gets my reputation from.

*So* glad everyone is okay, Baino! It really shakes one up when something like that happens -- I was in a minor accident back in college and I drove like a grandma for a month. Hope all goes well with the car and that he's feeling better!

Oh Bains, so sorry to hear all this, just thank god that Adam is okay, multiple pile ups can end up sooo nasty. The solution will come, and it will do so at just the right time, things always work themselves out exactly as they're meant to.

Sooo sorry to hear Adam had an accident but glad he is alright. Everything can be sorted out as long as there is health and body intact.
Wish I had a spare car sitting around :(
I never knew about the 7 points thing. People have a total of 12 points before the license is a gonner no? So he will be ok as far as his license is concerned?
*hugs*
G
PS: Good luck, I hope you win the lottery!

Tell you this week has been full of ups and downs. We're down to one working car so hopefully the Corolla will be fixed today and we can at least get him mobile and working!

Susan it'a an automatic neg driving charge if you run into the back of someone. And the scratchie didn't net me the $25 grand.

True Steph but it couldn't have come at a more unfortunate time financially. We'll manage some how we always do.

Ces, you're a bit down lately? Things can only get better I keep telling myself.

I know Wuffa, he only had Third Party Property insurance but because he's under 25 will have an $1100 excess and a $250 fine!

Yep Milady, shaken and a little stirred but otherwise OK

Thanks Melissa. He's such a safe driver but clearly didn't leave enough room between himself and the car in front. You've been through this recently I know.

Certainly hope so AV. At least it's given him the 'drive' to get more work on the landscaping side!

Yep, he won't lose his licence Gaye. Just all his saved up cash.
Lucky actually because he only recently came off his green P plates otherwise it would have been a cancellation and that would be devastating.

Dont buy a scratchie - most prizes have already been won and they still sell the scratchies under the pretence of your chance of winning the big $$. Better still I have a nice tin that I put all my small change in....save your dosh Nell - you'll be cashed up in no time! He's safe, you had a lovely day - revel in the simple things - there's always Hannahs car!

All well and good Lou but we need about $5,000 pronto! We'll get by until after Christmas anyway. I just wish I hadn't done my Christmas shopping already because I spent my slush fund!(Not that there was much slush in it.)

Apart from the prang you do have a good life baino - at least some of the time. I *love* seafood and that looked scrummy.

Ernest we do have a good life. We live in a wonderful place, loads of space but it is very frustrating being cash strapped. You want Seafood . . then Sydney is your place. That was "Truffles of the sea" . .yummy entree (I'm going to do it for Christmas dinner!)

Quickie, you've never owned a car? They're a necessity where we are unfortunately. Public transport isn't great. Yep he's fine.

Megan we drive very old cars so we only have full insurance on the Corolla which is 7 years old. The premiums for under 25 drivers are very high so our insurance is for damage to other vehicles or people, not our own cars. Frankly the repair costs more than the car is worth. Although after this, I think he'll be willing to stretch to cover his car.

eToro is the best forex trading platform for newbie and full-time traders.