A bittersweet walk today as I took the dogs down the street on what can only be described as a perfect winters day. The sun was shining, the sky was blue, temp around 22.

Although it was clear within a couple of metres of my driveway that partygoers on their way home last night had littered the entire roadside with bottles, cans, Macdonald's wrappers. I've just been up and down the street with a garbage bag and filled it with other people's rubbish. I hate that . . . then, about 100 metres at the side of the road . . .this . . . .I wonder why they left their rather expensive looking red metallic football boots? There is nothing at all wrong with them . . .I would have pinched them but they were a size 12 and I can't play soccer! So they're going to the Smith Family! Clearly there is too much affluence around here! I heard the bastards who woke me at 3:30am and I've been awake ever since. 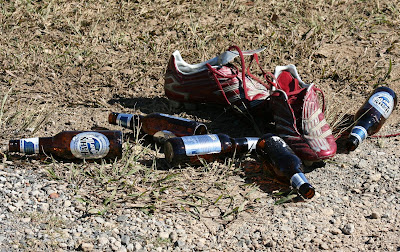 Not much further to the end of our street and I can no longer traverse a narrow path through to the lake due to the building of high density luxury town houses now all protected by cyclone fencing . . .instead I have to clamour over the grass moguls left by various dumpings of fill, and now overgrown with weeds, dodge the puddles in between and crawl belly down underneath a barbed wire and pig wire fence (pretty sight I can tell you) in order to get to the lake . . . 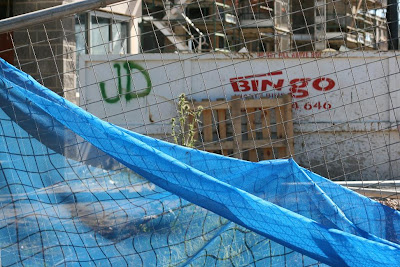 At the top end of the street, second block to the left the bulldozers have moved in, leaving only one palm as evidence there was ever a home there. It's worth a small fortune so I guess will be excavated and sold. The balance of the trees have ALL been knocked down . . . every single one. 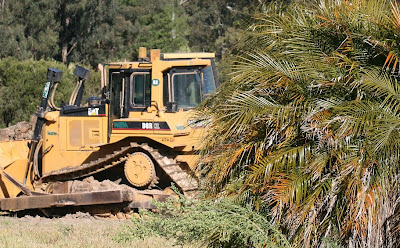 Only 2 months ago, there was a luxury home on the top left of our street where Mr Ryan once lived with his blue heeler that did amazing tricks. It was sold after he died a couple of months ago. Within three days, the house, tennis court and swimming pool had been levelled . . .within one week, the bulldozers are in and mapping out the roadways for the first development in my street. And this is the sort of thing they're building . . . defies definition really. I'm' sure it's beautiful inside with aluminium stairways, terrazzo tiles and bland grey walls with state of art granite benched stainless steel kitchens and an 'outdoor' room with lap pool . . .all cold and bland and designer label. At first I thought they were building an office block on a residential site but nope, this will soon be a house. This three and a half storey monster is being erected on a 700sq metre block! I imagine eventually it will be rendered in Egyptian White and stand sentinel on the hill like an ugly tribute to it's architect who clearly has taste in his arse . . 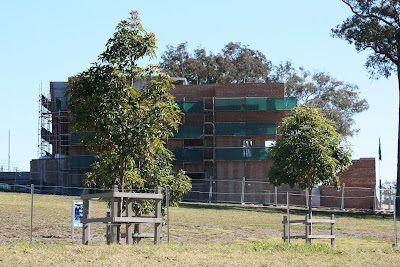 It's sad. Much as I want to move, get on with my life, have money in my pocket I can't but lament at the poor quality of town planning and development that's happening around me and feel a pang of guilt that as soon as that suited man with the briefcase full of cash knocks on my door I'll hypocritically say "Yes please!" and let the same fate fall my father's beloved property.

Once completed, the closest six houses will enjoy a view of the 7th at Castle Hill Country club and will never be built out . . Babybro's already thinking of buying one! 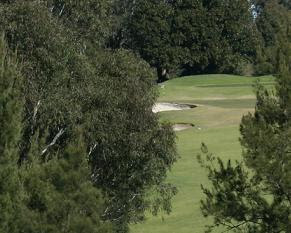 Fortunately, if you look hard . . just stay quiet and still, there are still some natural wonders to be found . . . 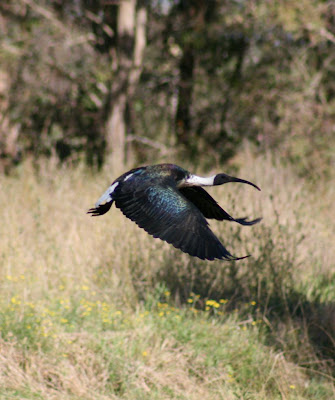 This is a silky ibis, new visitors to the back yard . . . 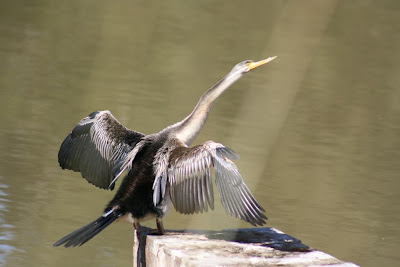 Huge Herony cormoranty thing . . come on Anonybird? What is it he was bout a metre and a half tail to tip and a huge wingspan. He looked as if he'd lost a couple of feathers on that right wing, or maybe they just haven't dried out but was swimming moments later. 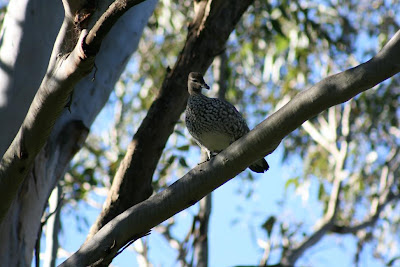 And there's always something very comical about a duck quacking 30 feet up a gum tree!
Posted by Baino at 12:53 pm

Great pics of the birds. Too bad about the ugly-apartment-to-be. If they have a block of land, it seems greed dictates having an apartment with lots of units = cashola. Nothing beats that, it's a sad, materialistic world anyways.

I feel your pain Baino. Its very sad to think I used to ride my pony up that street with no saddle or bridle!!! And gallop freely in those paddocks that are now houses, or swim in the creeks that are no longer there - they've been long ago filled or made into man made lakes for the nouveau riche to jog around.....constantly amazes me everytime I come over how close they are to mum and dad's (and your) lovely home.....

......but alas, I too will greet "The Man" with open arms when he comes a knocking.....who wouldnt??? I shall build my own little piece of paradise and when I die, developers will come in and do the same....

Same sort of thing is happening all around here too. I moved here because it was "semi rural" (as much as you can get in the outer 'burbs). But in the last seven years the developers have moved in with a vengeance. Greenbelts and grand old homes are disappearing under boxes that look all the same. Farms are being subdivided for "luxury housing" - and now the latest is that the local government wants to build high density, low cost housing, for the previously disadvantaged. Ta-ta to the rural life.
I understand your frustration completely.

I also hate what's going on around there, I can't elieve the Ryan's house is down, its going to look so different when I come back. But at least i can say I had a wonderful childhood in that place and I can't think of a better place to have grown up in. If all this development is happening maybe 'The Man' will come sooner rather than later? Everyone cross your fingers....and toes!

i'm with you in your outlook, baino!

...back from a week off, still stiff/sore from fall to rocks, thursday... need another 4 - 6 weeks to fully recover... maybe longer?

Well, hooligans you can see in Hungary as well. However it may not interest tourists although I saw a thing on Discovery Channel which dealt with football hooligans.

I loathe this sort of thing, I really do! It's happening here, too. We have our 'conservation' areas, but it seems as if someone in the know only has to wink at someone else and pass over a wad of cash and the deal is struck anyhow.

They're trying to get permission to build 5,000 houses at the bottom of our village, and if this goes ahead, we will effectively be joined on to the city suburbs. Oh joy.

I'm glad you finished on an upbeat. Such beautiful birds!

lovely ibis - remember that will only stand until the next project wipes it out- probably a return to the [past and the days of Mr. Ryan...sk sk

Sounds of progress tearing up the bushland here too. :(

Sigh. That is sad. And we seem to have the same problem with partying people on our road. Our creek is so quiet and wooded, but all along it you'll find bottles and fast food containers that have been chucked out of windows, or in piles where they sat along the water and then left the g.d. trash. I hate sprawl, too -- it's all around us. :(

Lovely shots of the birds! Thank goodness they hang around as long as they can!

The shots of the birds and duckie are brilliant. I especially like the one with the "JD" graffiti. ;)

Gaye it's a 'house' . . so ugly I wonder what town planners are thinking! They've become status symbols. Just take a drive around Bella Vista waters and you'll see what I mean . .big trendoid boxes.

Babysis, I'm mainly pissed off that I can't do my usual 40 minute walk due to the end of the street being blocked off while they build the Pointe. Yep, lets hope he rocks up sooner rather than later!

AV fortunately there is plenty of 'green' intermittently spread in this particular estate and nice walking tracks and ornamental lakes. I know development is inevitable but there seems so little thought going into the look and feel of the place.

Clare you'll hardly recognise it I'm sure although that's the only block in the street that's being developed at the moment.

My point exactly Ian . . ugly boxy McMansions . . I couldn't imagine the cleaning myself! Cleary these people do not value space or a garden.

Maybe I should move to Nova Scotia? Hope you're bruises are healing, Hirudoid ointment is great!

Ropi I know this to be true . .we're just not used to it in our quiet little street that nobody used to know existed. It's now a thoroughfare for people living in the next suburb and they scatter their rubbish on the way home from the pub!

Jay we're already a little five acre enclave surrounded by suburbs. It's inevitable I'm afraid . . I wonder where all the birds will go when there's no woodland to roost!

ibeati: Welcome and we can only hope that these massive mortgage guzzlers actually don't become the slums of the future!

I feel your pain Bimbimbie but in usual hypocritical fashion. . .I can't wait for my 2 mill to drop into my bank account! At least I can then build my own little ecosystem!

Melissa, it's so disrespectful isn't it? Why can't they take their rubbish home with them? If I left a 'bin' out there for them, they'd burn it or drag it up the street! You sound like you're in a similar position to us with your little piece of Paradise!

Hi JD, just slipped that one in while I was replying. You know I thought about you when I took it . . now stop defacing our mini skips!

Fingers and toes crossed a big fat briefcase arrives sooner rather than later.

Then you'll have a new washing machine, a dishwasher, a cleaning lady and you'll never, EVER have to clean out DB's room again!

baino - how depressing. I'm glad you found those lovely birds to photograph. Progress? Only of a sort. Thank God France seems to be in a kind of stasis. I'd hate to be going through your experience. Courage!

Steph, absolutely although I've been holding my breath for a long time now.

Ernest . .the bird life is quite prolific thankfully, always something pretty to photograph. Can I come and live in your ecurie! Then again, I'd miss the weather!

Oh! I missed "a house" bit. From the picture too I guess I immediately assumed "apartment block".
Peh, maybe you will be invited to the lavish, expensive cocktail parties by the lap pool!!!!!!

Haha Chicka . .you must have been 'skimming' something I do when I'm busy!