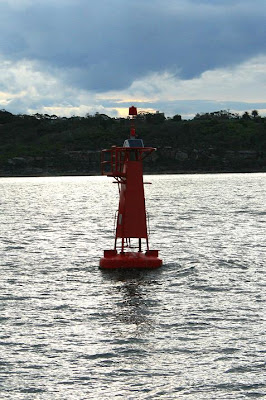 I met a buoy!
(for my American friends, it's pronounced BOY, not Booey)
Remember that advertisement for Claytons - a non alcoholic drink that tastes alcoholic? "The Drink You Have When You're Not Having a Drink" . . .well today I had a Claytons Whale Watch. "the whale watch you have when you're not having a whale". Today I went not-whale watching . . mainly because there were no whales to watch. However we did:

Miss the city bus because Amy was busy driving the porcelain one after a big night out at the RSL and couldn't get her act together quickly enough. Once we dropped her home for a day of couch love I had to drive into the city to make our connection.

Get high on Travel Calm a nasty cocktail of caffeine and anti histamines designed to quell sea-sickness. We took them as a precaution because the trip was about 5 hours on the open ocean. Seriously, half an hour after taking two tablets each we were high as kites, light headed and having difficulty getting on the escalator at Darling Harbour, thank God we didn't attempt the steps or we'd have never got on the boat! Adam slept like a baby for about an hour, bolt upright in the freezing wind!

Catch a far-too-small- catamaran to my mind! I was rather disappointed when I saw the size of the 'ship'!

Brave a wet, cold and windy day on what is normally a beautiful harbour and I have since vowed to buy myself a sailing parka just for that very reason (and because they're high visibility and very pretty colours). I froze. My fingertips have barely got their feeling back.

Sway precariously on a 1.5 metre swell outside the heads (on the ocean)!

Get totally ripped off at a posh Darling Harbour restaurant where obviously we were paying for the view and not the food. $46 for two greasy chicken burgers, more chips than were necessary, a coke and a latte and a rather precocious young waiter who looked like he was serving us in his school uniform!

Get a voucher for another go in the future, hopefully next time we'll catch a glimpse of a humpback or southern right whale! 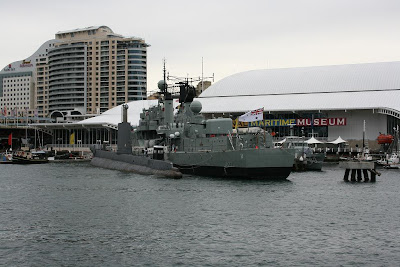 Sydney Maritime Museum, opposite where we caught the 'boat' 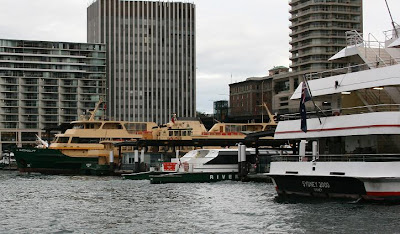 Circular Quay Ferry Terminal . . .but it's not circular 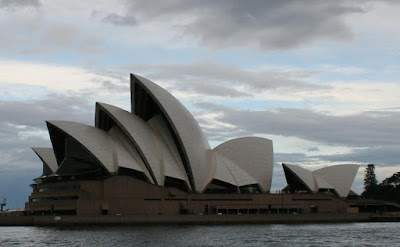 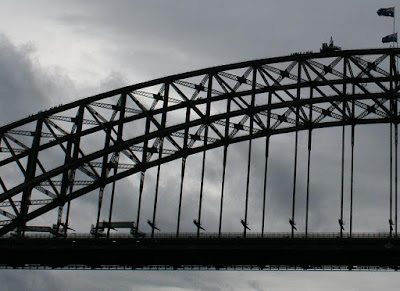 Can you see the two groups of bridge climbers, top left and approaching the flags?
Notso, you - me - January! 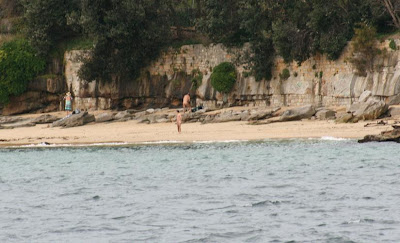 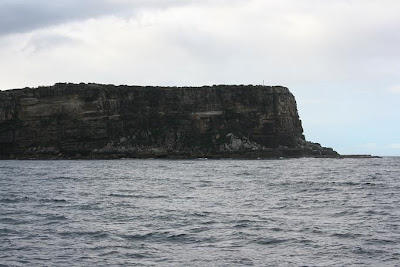 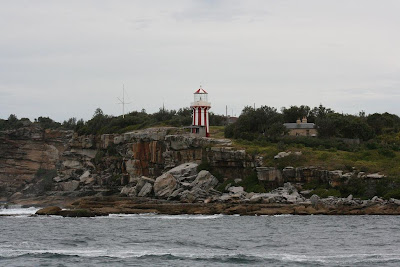 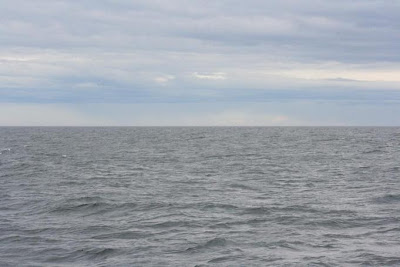 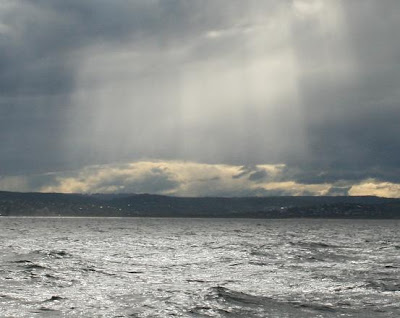 Jesus sent me a sunbeam but the whales weren't impressed! 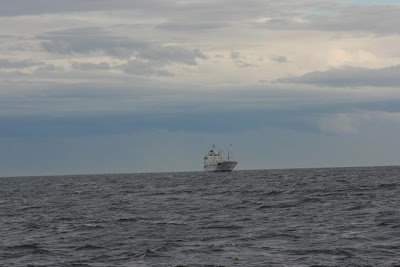 Okay not a whale but it's big! Please note the pitch on the horizon! 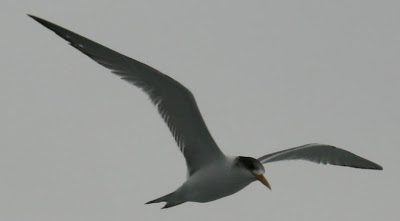 A terny seagully thing, the only living thing we saw all afternoon other than French and Japanese tourists 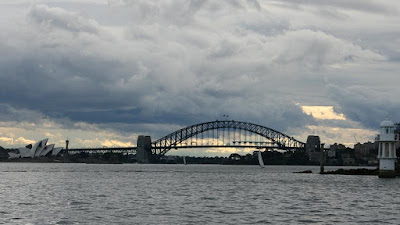 I NEVER get sick of this view, coming back into the harbour
A photo you're unlikely to see on a postcard 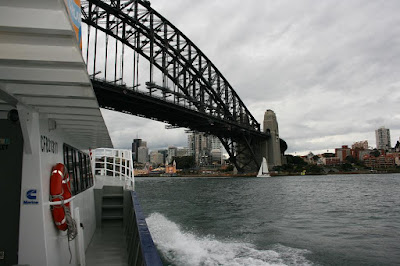 Heading back under the coathanger

Sadly, despite the best efforts of Jamaican Captain Clayton and his cheery whale spotting tips (look for the spurt!) there was nothing, nada, niet . . not even an accompanying dolphin! Very disappointing. Still, even in the cold and wet, it's a lovely place to be bobbing about on a Sunday!
Posted by Baino at 6:52 pm

Very impressive photographs. I love the rock formation on the South head beach light house and the gateway to the great PO. The image of the coathanger and the Opera house and then another structure on the right looks perfect, better than a postcard. Are there rails on the bridgewalk? You even posted a bird photo. I've seen the harbor photos from another local blogger, I think her name was Anon :) but she never posted nudists. Too bad they can't be enlarged enough to verify they are really nude. I always pronounced buoy as a dipthong "boi" but the American-borns always pronounce it "boo-ee". I think it's that English vs American pronunciation non-issue. I just get annoyed being corrected when I say "boi" and get looks like I was an alien, maybe I am :)

What a shame, Clayton's whales are very disappointing. I was looking forward to your trip. Your photos are fab though, lovely sunbeam. Debs x

It's a damn nice harbour Ces, I believe similar to Vancouver but on a sultry day it has an entirely different character. Now if you click on the nudie photo, clearly they are in the nudd! Mad people that they are, it was cold and windy . ..shrinkage guaranteed if you know what I mean. You keep saying 'boi' cos that's right
In other news, watching two Americans eat today, I feel like giving them lessons on how to use a knife and fork .what's with this stabbing your food with a fork thing? The knife is used as leverage to cut food and then push said food gently onto fork prior to lobbing discreetly into mouth . . Americans just seem to stab their food and gollop!

As for Anon, well I rather missed her today when that terny thingy was following the boat, and seagulls were attempting to pinch our chips in a rather posh restaurant. . . .oooh, oooh, we saw brown albatross as well but the boat was pitching so much none of my photos turned out.

Ahoy Debs, snuck in there while I was responding to Ms Ces . .yeh, very disappointing but we'll go back in the next couple of weeks, maybe a 9am tour this time when the waters are calmer and see if we can improve our luck. Hopefully, we'll have some sunshine!

Well, I am not American and had no idea how to say buoy, is the pronunciation rule true to me as well? hehe just joke. I saw an army ship in Kos but it wasn't a museum thing, that was real. I mean there were soldiers and everything.

Oh my God, you just decsribed eating so sensuously...you are my kind of gal! Go Aussies!!!

oh dear, how annoying! Do they give you vouchers until you actually see whales? Cos if not they really need to have some kind of back up plan, a fake giant whale or something to keep everyone happy. Poor Fringelet, big night eh??

cool pictures! And a cool text too. You are too funny. But I'm sorry you didn't see what you wanted v__v.

Hey Ropi . .well if you want to speak the Queens English . .definitely is BOY. (I guess it depends on whether your teacher is English or American)I would have taken some pictures of the Aussie warships as we passed Garden Island but I was on the wrong side of the boat!

Dunno Clare, we have vouchers for another trip so I might go in the morning this time if I can get his Royal Hangover out of bed in time for a 9am cruise. Two were spotted on that one! *sob*

Hi Ebs . .well it was quite pleasant on the water even though it could have been a nicer day. Better luck next time I guess.

Wuffa . .don't tell me Canadians say Booey! Didn't totally suck, it's still nice messing about in boats for a change.

Ah you need to come to Middleton, in humble South Australia - whales galore. Truly; and only about 50-100 metres from the shore too.

My brother lives there and it is rather nice to sit on his balcony and see (and hear!) them surface and use their blow holes.

Aw lovely. You do make me laugh: 'Adam slept like a baby for about an hour, bolt upright in the freezing wind' har de har!!! Great photos. I'd love to visit Oz. Might come and annoy you one of dese fine days. Do they do pink jackets too? x

Bit dull to be out sunning wobbly bits on a beach isn't it? I would suggest they were hardened nudists, but that might get misinterpreted.

Kath . .well thanks! Thanks a bunch. If I could drive down there in a weekend I'd be there not freezing my touchie of outside the heads! Or wondering up to Harvey Bay where the bastards apparently like to frolic with the yuppies and mmovie stars! *goes and slashes wrists* Is it too much to ask? Really? One whale? God we killed one in Pittwater . .Mingaloo comes into the harbour WHILE I'M AT WORK . .ah . .next Sunday cross your fingers for me!

EM you're welcome at the mad house any time and Adam has always been able to sleep in the most odd places. He also had the proper wet weather gear being the outdoorsy landscapery type (bastard. He once fell asleep on a jet boat on the Fijiian Namoamoa river with a plastic sheet over him to prevent the spray from waking him up. The boy is a UNIT. Mind you, coming home at 4:30am might have had something to do with it . . ah . . what you have to look forward to!

Thrifty they were too old to get hard! Most disappointing (both men I might add)

depends on the location, i guess, as to boi or booie....

Lovely photos, what a shame the whales didn't put in an appearance for you ... a few years ago we did the boat trip off Hervey Bay before it got too popular, we were lucky and it's something you never forget ...
I'm giggling over what images you have painted in the minds of your overseas readers regarding bra boys ;)

Hi Bimbimbie . . well nobody's asked so they're either very knowledgeable about the Cronulla gang or afraid to ask! Yep, we'll crack another one next weekend, morning this time so hopefully we'll get lucky!

Beautiful shots, Baino - such a pity about no-whales. I'll see if I can find some for you this weekend! ;-)