What a weird day . . sometimes you just never know how they're going to turn out but today was a doozy.

First up, two policemen, young and smiley, knocked on the door "Does Mr Peter D live here?" and after establishing that he does but wasn't home and explaining that I was his sister and that there was no need to panic, Hannabanana hadn't stacked the Nissan in the ditch at the top of our road (neatly excavated due to the new subdivision) . . .apparently a 'blonde' was seen in his SS Commodore backing into another car and driving off! Yep, the crime rate is so low here that two policemen were dispatched to follow up on a complaint by someone in a carpark who's car had been scratched by a reversing vehicle. Upon inspection there are three minuscule, teensy weensy, ever so nanoscopic (do you get my drift) dings in the bumper bar of the SS. 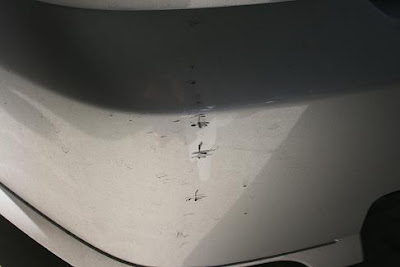 Whatever damage was sustained by the other car must have been equally insignificant but someone has dobbed Stressany in and the boys in blue had nothing better to do . . they're coming back this afternoon to see if Ms Scratchit is home . . she remembers nothing, felt nothing . . .so we're spinning conspiracies of insurance fraud . .God I hope they turn up because I'd like to hear the conversation between them and Babybro! Maybe they'll stay for a drink and one of them will fall in love with me and then life as I know it will begin anew! 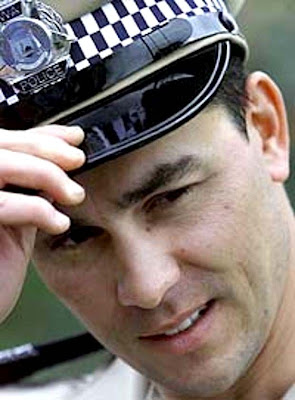 Second thing, I took a walk, as is my Sunday custom with the galumphing dawg galloping ahead. It was a cold, windy blue day with white puffy clouds. Half way along the attempt to walk over to Bella Vista Farm for a photo opportunity and the clouds closed in, the nipple crippling wind spruiked up and I was showered with dust and builder's rubbish. I swear that little bit of blue was right on top of me when I left . . .within 10 minutes . . .the clouds rolled in. 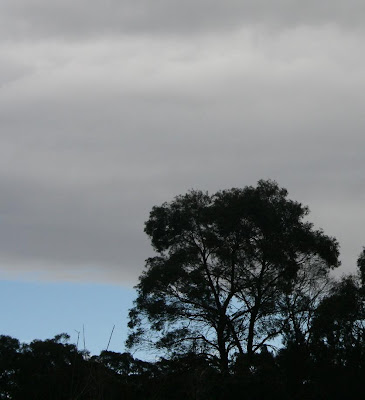 I cut the long road short but not before being unceremoniously dumped on by a load of wet stuff coming from the sky, I think it's called rain, and a quick diversion through "The Pointe" still under construction before being accosted by Vietnamese plasterers who were distraught because I was within the temporary fencing, apparently meant to keep vandals like me out! Fuck that shit . . I wasn't going mogul climbing again so I just politely ignored them and kept going, they're not keen on dogs unless they're on the menu so they didn't approach too closely.

The wind by now was howling, I'm soaking wet and a flock of low flying cockatoos decided it was time to have a little resty poo before resuming battle with another flock over the hill so the only photo op was shooting a few pirates (our affectionate term for the thieves) before heading back into the comfort and warmth of home. 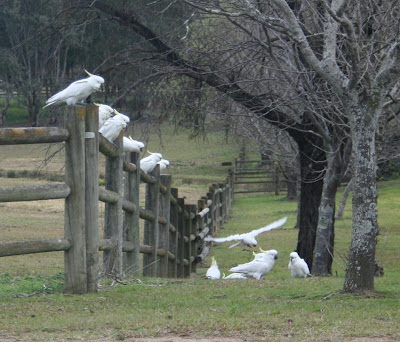 Ducked up to the shops for tonight's roast and noticed this sitting on the verandah! WTF? Nobody knows where it came from or to whom it belongs . . I'm sure the mystery will be solved once DrummerBoy comes back from landscaping The Merry Widow's back garden. Perhaps he's taken on a gig with some Bavarian thigh slappers. 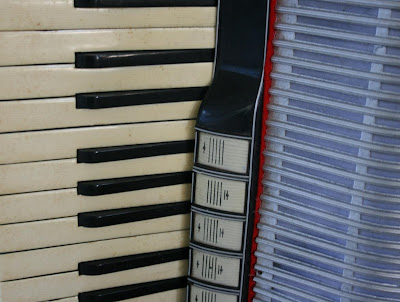 Finally, of course AFTER I return from the shop, TheBenchwarmer decides to drop in for cheese and bikkies with the new beau. Currently impoverished he offers to bring over muffins and wine . . interesting combination . . so I have to rustle something digestible up from my pre-payday fridge which contains carrots, potatoes, cheddar cheese, 1 doz organic jumbo free range eggs and a plethora of Thai and Indian spices and curry pastes . . .what I'm gonna do with that lot requires a Fairy Godmother not just culinary imagination. He did bring chocolate chip muffins and a gorgeous girlf. I managed a hot bean dip and some nibbly bits. I lovz me Benchwarmer although he's not warming the bench any more!

So . . day full of surprises topped off by an Opera based on the life of Oppenheimer . . I hate contemporary opera . . actually I'm not fond of old school opera either - not dislike, I truly hate the pretentious crap. Fat women playing the love interest pelease! It's only that I'm sitting here typing that I haven't flicked the channel and the fact that there are interesting snippets about Oppenheimer's career interspersed with the totally discordant tunes . . .one man is repeating in a deep baratone "I am sweating . . .really sweating . .yes . .I'm s-w-e-a-t-i-n-g!" Bleaagghh!

I thought it was going to be another bloody Sunday!
Posted by Baino at 3:18 pm

PHWOAR!!!! You couldn't DHL me that policeman could you? x

How eventful mother! So Stressany's denying her hit and run? Wow, we have such a criminal family!!

The police eh? Wouldn't you think they'd have something better to do that investigate a few barely visible scratches? Still, it keeps them away from controversial art works featuring young girls, I suppose.

Ah, another operaphobe - a pleasure to hear it! I could never see the point of all that wurbling and warbling. I've nothing against plump ladies falling in love. But swooning is sufficient, they don't need to spend hours singing about it. Jenny loves opera though, so mutual incomprehension there.

lol... at least you acknowledge the rain, unlike the twerps over in sydney calling snow, 'soft hail'!

wtf is that all about?

mayhap someone wants you to learn how to play zydeco music, so totally NOT bavarian!?! :P

Clare, much like Peter denied backing into the Corolla and smashing the tail light, we're still waiting for him to replace it. Now he must have HEARD that, it even got me out of bed! Yes, I think we are now officially 'people of interest to police'

My thoughts exactly Nick which is why we think it might be an attempt at insurance fraud. Being on the back of the car, there's no 'proof' that the other vehicle didn't hit her! Yep opera sends me into a spin!

Soft hail? Ah I remember. OMG sitting on the porch with an accordian and a washboard . . .that's even worse . . and sorry Wuffa but "Bird Anonymous" is the queen of anonymity . . and she only lives across the city from me . . frustrating because I like to meet my commenters where poss! Hope you're healing!

no prob, she's a sweetie!

Hunky dudes are ringing your bell for no apparent reason and a bit o' soft rain fell from the sky - sounds like a grand day to me!

Hahaha! Ooow! That policeman is cute. He can knock on my door any time and tell me that someone scratched whatever it is that belongs to me.

Quickie . .I wish they'd do a little more than ring my bell!

Ces: I was over at yours while you were over at mine! It's unusual, I usually get the gruff ones although the Kellyville Fire chief likes me! Shame he didn't look like the Bobbies!

What? He damaged my lil Rolla? He will PAY!!!