D Arrives with a SPLASH! 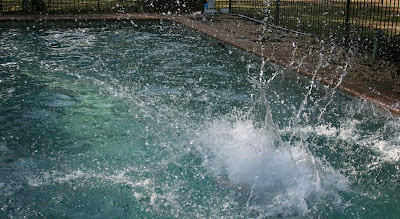 Well, after being four hours late, 14 hours sleep, missing the inaugural welcome to Oz barbecue due to a major jetlag crash and drinking copious amounts of Carlton Dry Fusion, I have a feeling my house guest is having a good time. The weather has been fantastic, cool when he landed then hot and sunny since. We first went to a local native zoo and bozo here forgot her camera so we'll have to go back. . .

We headed into the City on Sunday, checked out the Rocks Market but in true blokey style, he's not much of a shopper. So we settled for buskers. These guys are selling 'disco' didgeridoo CDs for $10 . . . 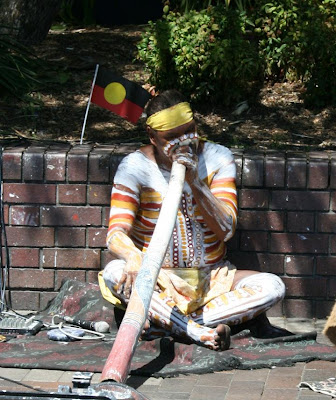 We walked through the Botanical Gardens because the view is splendiferous and there was plenty of shade for he who is Irish pasty . . .

We took the Ferry to Manly and headed for the beach, not before buying Board Shorts and T Shirts . . his footy jumpers were a little on the warm side . . 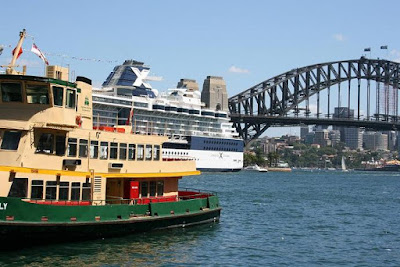 People were roasting on the beach like a bunch of sealions in the midday sun . . idiots. 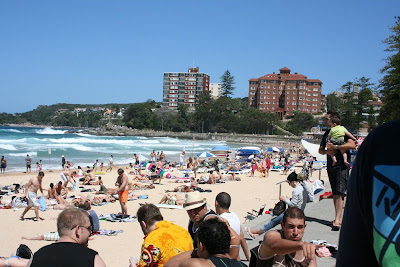 . . . but the beach was closed, too windy, to rippy . . .actually we found out a day later that four beaches were closed due to the presence of hammerhead sharks!

Pasty boy, playing with the dog by the pool . . The man is a FISH! 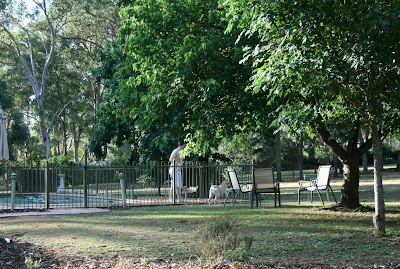 Looks like a whole lot of fun!! :) I'm sure you'll enjoy every moment -- and a disco didgeridoo mix is just too good to pass up, lol. I heard that Nicole Kidman did a big Aussie no-no and blew on a didg recently -- tsk tsk. What gorgeous shots -- makes me want to hop on a plane! :)

Wish I was there!

you are obviously a world class tour guide, complete with colorful language and a quite unique way of interpreting the aussie ways. no b.s. on your tour bus!

really, i hope this is all you hope for. so far, it sounds fabulicious.

Baino - you're a hoot - previous post says your not going to be posting much and then you post photos - commentary - detail! photos remind me of my introduction to Sydney - God what a beautiful city!

make sure he's nicely browned before you send him back to icy ireland ;) lol

Have to ask, "What are footy jumpers?"

Yay for the tour guide! So funny to see the beaches packed in January. I'd be one of those "idiots" by the way. Skin cancer, shmin cancer! :)

You'd be pasty too if you had to put up with Irish weather :-(

I hope your guest brings you lots of The luck of the Irish!

Hey it's rare we get to enjoy a pool that isn't indoors.

Sounds like he's having a good tour of all the great Sydney spots. How about Cronulla or Coogee? Or the Blue Mountains?

Wolf - Make sure he's nicely browned? Could be suicidal in that relentless Oz sun! Pasty is much more healthy.

Yes, Manley beach was packed when I went there as well. The usual T shirts and shorts exposing acres of vulnerable flesh everywhere. Not that many with sunglasses either.

I really need to come there someday! When I look outside the weather is exactly the opposite.. -17 degree Celcius, 1.4degree Fahrenheit..

Glad you're having fun. A pool? Outdoors? In the sun? You'd have to wrestle me away!

Nice photos! The central heating broke yesterday and it's freeeezing... these pictures are helping me stay warm :) I'm so glad D's having a blast, not jealous at all.

Seriously it looks so idyllic it's unreal...

... that park down the bottom reminds me of a park I once visited on the Paris Left Bank at a place called Commerce... there were old men playing boules and everything. It was amazing...

Baino is obviously having too much fun to blog.

Sounds like a grand time is being had by all.
But now what, pray tell, is a "disco" didgeridoo? It's seems, somehow, a bit of a strange mix of concepts and sounds!

I liked the splash and the hot weather that goes with it. I'm typing this freezing my bollocks off, wooly hat, double leggings, Rambo jacket on top of more layers. (You will gather we don't have much heating yet).

Glad to hear that you all are having a blast. I could go for a dip, myself. Of course, it is pissing down out and quite cold! :)

nope, baino's not around. she is hostessing. nope, won't be back quite yet.

sounds like a fabulous time was had by all!

Sorry folks been busy doing the Maritime Museum, Darling Harbour, Hunter Valley but will get some respite later today to play. The kid is going through XBox live withdrawals so I've found a live cafe where he can play and I can blog (his bedroom is my lounge so access to anything other than a laptop is limited plus my ineptitude with laptops is beyond belief and my internet connection is suckier than ever.) We've had record heat over the past three days which has made life very uncomfortable but hasn't stopped us. Cooler weather has hit today but my little possum is feeling exhausted by the heat. Today we're off to the Aquarium and Imax once the Xbox bug is satiated. I'll be visiting on the weekend for sure as Adam has youngling things planned so I can take a break from being tour guide.

Seriously, I would never have thought of ``didgeridoo'' and ``disco'' in the same sentence!!

Will soon be posting your alien, with a shoutout to you ...

Can I come next? I could do with a little Aussie warmth!

Beaches closed due to sharks? Csncer-inducing Aussie sun? Spiders the size of my fist? Ha! I say! Pass me that plane ticket!!

nah folks she's been a great host. Couldn't ask for someone more committed to their guests' welfare and all that shit.

Love this summer in January business south of the equator. Have fun with the touring.