My feet are sore! I have muscles in my ankles that I didn't know were there . . . Never has a "Footspa" been better used. We're all a bit weary from walking everywhere and Oirsh is finding the heat a little tiring. Ha! He aint seen nothin' yet.

Saturday, the kiddywinks took off on the Effie Bus and toured the beaches of Kurnell, barbecued and generally played hard and splashed about. Paduan was seriously sunburned, very burned. Despite multiple motherly warnings on the ferocity of the Australian sun, he applied his SPF 50 only once. Just not enough and is now limping about with giant blisters on the tops of his feet and walking like an arthritic octagenarian. 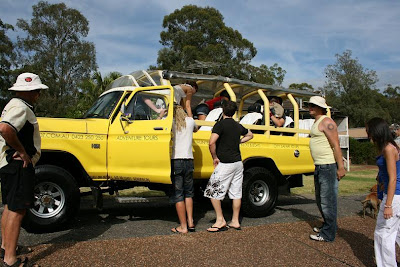 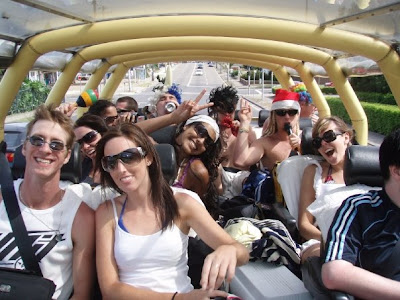 Sunday we decided to venture somewhere underground, indoors and ultimately cool so after 2 hours managed to cross the Great Dividing Range via the scenic route and hit Jenolan Caves. 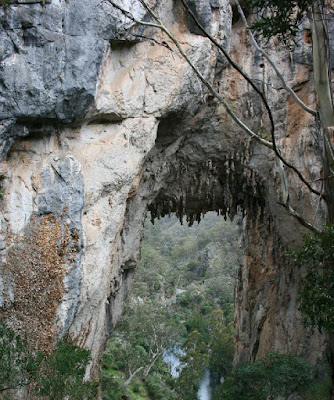 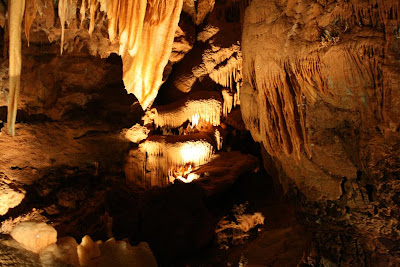 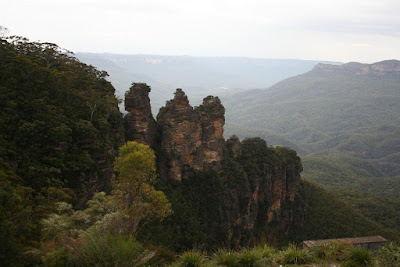 . . .had a quick pit stop at the Three Sisters at Echo Point, Katoomba 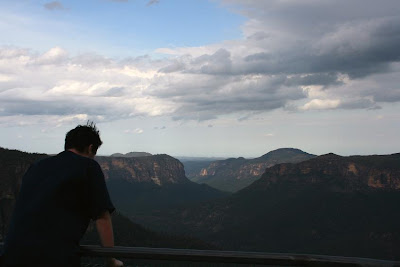 Yesterday DrummerBoy and the Paduan did their bridge climb. No cameras allowed on the climb so the best I could do was a quick snap of them 'practising' how to negotiate being tied to the railings. 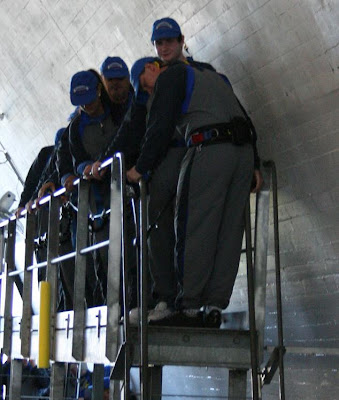 It was a fabulous day, clear skies and both enjoyed it immensely.

Meanwhile Fringelet and I walked the entire length of town from Circular Quay to the Art Gallery to check out the Monet and Impressionists exhibition which was on loan from Boston Art Gallery. Beautiful and also interesting to see how the painter of light started quite muted and monotonic then ended with splashes of colour with his fabulous Lilypond and Haystack series. 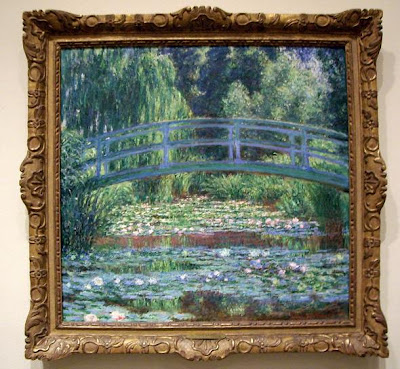 Since the exhibition was quite small (56 paintings and 3 sculptures) we had time to kill and wondered through the Art Gallery of NSW. It's a nice gallery, Victorian architecture in the neo classic style with collections of Australian Masters, some European, contemporary, aboriginal of course and a goodly portion of Asian displays. But it was the Contemporary floor that had us in a spin. Now I know art is subjective but . . .it really made me think that if I had a pretentious enough proposal, I could possibly get a Government grant to create something like this? 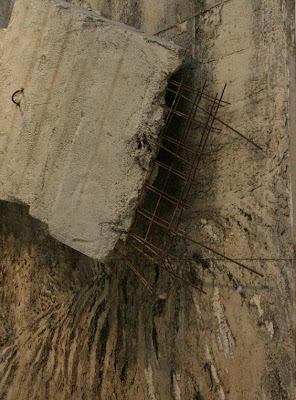 Concrete steps, mounted on a wall???? 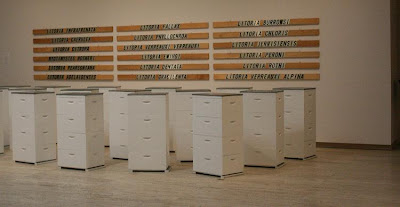 Bee hives with the names of frog species displayed on
the wall behind them ???????????
After that, Fringelet and I were in need of a cold Sav Blanc so walked another 4kms to Jordan's at Darling Harbour for Fish n chips and some people watching before we met the boys for lunch and hit the Powerhouse Museum for the second time. 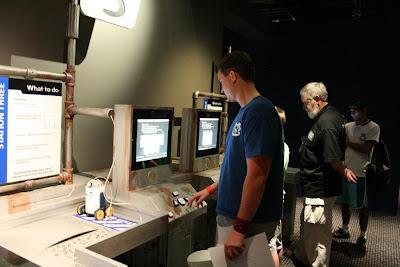 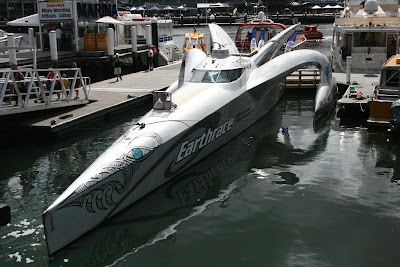 On the way back, we discovered that the round the world, biofuel driven Earthrace boat was in Darling Harbour for some respite and recovery before returning home.

So that was Saturday, Sunday, Monday . . .today a little quieter with the boy playing XBox live this morning and me tending to some personal biz. Can't keep the pace. Apparently the birdies wake him up in the morning . . slightly louder dawn chorus than the Robins and Sparrows at home!

Off to the nation's capital tomorrow. All four of us which will be fun I hope. Why? Because it's museum paradise and the lad is rather fond of technology and warcraft and touchy feely exhibits! I just hope his blisters heal and my feet can keep up the pace!
Posted by Baino at 11:37 am

What a gallavanting time you're having - enjoy Canberra!

Wow. Just wow. Great shots and sounds like a great time is being had by all (except the feet, o' course)!

Enjoy the rest of the week and I hope you find time to update us again on your adventures.

I've seen that Monet. What is it about that picture that you can't take a picture of it and get all those greens the way they really look? Or is that just me?

Nice photos, well in Hungary people are quite used to walking usually.

I think I'll stick to tiller and sail for now.

Going back to work will be chicken feed after your holiday! ;-)

The Jenolan Caves look amazing. Must have a look if we get back to Oz again. We found the Monet exhibition disappointingly small as well - and they weren't all Monet either. Still, some fantastic paintings included. As for that contemporary stuff in your pics - much as we love modern art, we also wondered if they were a big practical joke....

Holly smokes, you are one incredible hostess with the mostest! I love all the natural spots and those young uns are clearly having an awful time! :)

You have a ton of energy. How do you fit all that into your days?!

looks like both of you could use some time in wheelchairs, pushed by burly blokes :O lol

I think you will go back to work for a rest!

Have a great time at the Capital. :)

Gold star for Quickroute! I just hope everywhere is air conditioned, it's going to be 37 inland for the next 2 days.

They're gorgeous aren't they? Could have been more tho Meg, we spun through it in about 20 minutes.

Ropi I am also quite used to walking just not quite so much!

Pretty cool eh Steph, we saw it on TV a couple of days ago. It's left a zero carbon footprint apparently.

Nick they're really good but a bit exe because you pay for each cave. We only did one, and a self-walk. It's just that everything is so far away here. You'd have to book a day tour or hire a car but I can recomment the drive along the Bells Line of Road and up through Hartley - beautiful.

Thrifty, don't be, I haven't stopped perspiring for days! Believe me, ladies do NOT gently perspire, we drip like stuck pigs!

Yeh, it took him a while to get into it but we've managed to do something substantial each day . . .he'll sleep well on the flight home I think.

TCL, YOU have a lot of energy. For me it's mainly driving and walking.

GM work? GAH! I'm getting used to being a 'stay at home'

JD you got sunburned in Ireland? Good Grief, you must be paler than the paduan who is developing an ever so slight farmer's tan. We don't have SPF 80

Sounds like he's having fun anyway! And so do you. Must admit I'm with you all the way on the contemporary art. Concrete steps on a wall? *Yawn* ... well, that piece of art has failed dismally, because I can't even be bothered to wonder why.

I could live there (it's further out of town than you think but quite sensationally geekily awesome).

can't keep the pace? girl, you've exceeded the pace. i hope by the time you show up in new england you're ready for hottubbing under the stars and back road meanderings (okay, and maybe a few city lights). i am SO glad this has obviously been all you hoped for!

More and more fun!! Did I tell you that the other night I dreamt that you took me on a big Aussie tour? I woke up sunburned! ;) Really, we had such a good time and I woke up thinking how funny it was that your touring with the Paduan got into my dream world. :D

Not so much silly J as not 'listening' I warned him about the ferocity of the sun and he's paid for it in spades.

Chris thanks for the hot tip and you are geekily awesome. We did take a look but it was 50kms out of town and frankly so hot everyone was a little petered out. Defo one for next time, come with?

To be honest kj, Clare Ads and I have had a great time. I think the Paduan has but he's not the enthusiastic type so hard to tell. The heat is definitely getting to him.

Hello Squirrel, welcome aboard the bad ship Baino . .better in your armchair than in today's 43 degree heat!

Melissa, I think I'd be able to take you and the kiddywinks (and lovely boy of course) on a reasonable tour. It's harder keeping a 20 year old entertained than I thought. . .has to be action action action!

You sound like you're having a right blast! Hope the Paduan is enjoying every moment of it!
If I come for a visit will I get the same tour-guiding?! ;-)

AV certainly I'd be very pleased to be your tour guide (no fast food, no XBox though!)