Whilst Australia Day is a celebratory day, it isn't for some. It marks the day a careful and environmentally conscious people who occupied the land for (there is some argument about how long) perhaps 2000 years were subjugated without treaty, without respect and without acknowledgment.

Since 1930 the indigenous population of Australia have seen the 26th January as "Invasion Day". Indeed, the British Empire's reluctance to recognise indigenous inhabitants was obvious and an attitude that prevailed until the 60's when indigenous Australians were granted the vote. Some believe that May 27 should be the new Australia Day . . The day in 1967 when a national referendum, saw 90.77 per cent of Australians - the biggest majority in a national referendum - vote to enable Aboriginal people to be counted in the census and to be subject to Commonwealth laws, rather than just state laws. Works for me although there's a surfeit of public holidays between June and October . . .a day off in perhaps August would be nice!

David Carment, a professor of history, from the NT, says the date for Australia Day commemorates the first European settlement of the nation. He says that alienates many indigenous Australians who feel it was the start of an invasion. He has a point and since we are moving towards 'reconciliation' with our indigenous population, moving the date to something more appropriate such as the date of Federation

On 1st January 1901 the separate colonies of New South Wales, Victoria, South Australia, Queensland, and Tasmania would be united and known as the 'Commonwealth of Australia'. In August 1901 Western Australia joined the Federation the first of it's kind to be declared without a Civil War. Although I can't see having Australia Day on New Year's Day will wash with the general populous who would be jipped out of yet another public holiday Monday, should the date be changed.

This year's Australian of the year is prominent indigenous activist, labour party stalwart and aboriginal rights campaigner Professor Mick Dodson, thankfully not a sportsperson or a country and western singer. He is a respected member of the aboriginal community (although many of his number see the accolade as a token gesture and claim there are others more worthy of the title. - there's no pleasing everyone!)

Prof. Dodson wants a change of date, a more suitable and inclusive celebration and given the behavior of some idiots with a nationalistic bent on Australia Day who poured through Manly walking over cars, intimidating shopkeepers and tourists and shouting racist slogans, I'd be happy to move from the white ratbaggery of the 26th January. It's become quite jingoistic and given license to idiots to brandish the flag like a temporary tattoo and persecute new Australians with "Go home - We're Fucking Full" slogans. Outrageous and embarrassing.

I'm actually warming to the idea . . .It seems more fitting in a multi cultural society to celebrate our unity rather than the lobbing of a prison hulk into Botany Bay . . . We can't rewrite history . .we were a convict colony, we are a member of the British Commonwealth but it's probably time that we forged our own identity. The Americans celebrate the 4th of July as 'Independence Day', the French their freedom from monarchical oppression in 'Bastille Day' . . .so why not? Our fearless leader has emphatically refused even the slightest discussion on the subject.

Why not move Australia Day to include all Australians and celebrate our unity despite diversity . .or am I being too politically correct? Perhaps when we become a Republic, we'll adopt that day as our national day . . .*dreams on* 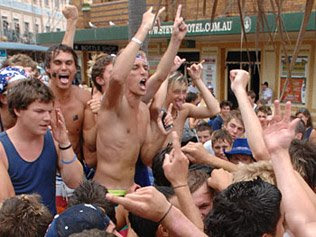 I'm sorry, but why don't you fuck off . .you're an embarrassment! Teenage hoons on Manly Corso, picking on Sikh, Eastern European and Asian shopkeepers and harassing tourists . . . my kids dressed in their Aussie garb and went to a Triple J Hottest 100 party . . . proud, happy and peaceful! Where are these kids' parents?
Posted by Baino at 7:11 pm

It seems only right that Australia Day should be on a day that recognises the aborigines and not a day that reflects the colonial takeover. And the celebrations should emphasise their culture as well as today's culture. The racist mayhem at Manly was disgusting. Good to know the police are determined to track down those involved even though they didn't come from Manly.

I wonder what Australia Day would be like if Russia colonized it instead of England?

What a thought! No Australian cricket team, never a need to ever fear the name of Shane Warne.

What about moving Australia Day to the anniversary of John Curtin's death? Curtin was the man who really opened up clear blue water between Australia and the colonial power

I think your idea is wonderful - why not call it Unity Day too!

Teenage boys exist primarily to be an embarrassment. It's a core function. You could call it unity day and everyone could be on board and racism could be a thing of the past... and whatever the day was, teenage boys would still gather, drink too much, and act like idiots.

Instead of saying offensive things about race or culture, they'd say offensive things about something else. Of course, that's no reason not to strive to do all those things, I'm just warning you that even if you get there, you're still going to find yourself shaking your head and saying, "Where are their parents..." albeit perhaps to a smaller crowd.

Well I finally got the WiFi situation sorted out in Buenos Aires. So once again I am back online with a more reliable connection.

In the US many no longer celebrate Columbus Day because the gentleman from Genoa is a symbol of the European invasion to the native Americans' way of life. Nonetheless it is still officially a federal holiday.

I once read a book that documented the bicentennial of Cook's visit to Botany Bay, among other regions of the Pacific. The author interviewed a number of Aussies and found that not many cared much about Capt. Cook's exploits - especially since his lush Botany Bay turned out to be a arid land barely capable of sustaining a major population during the dry season.

All very interesting stuff. How did the film "Australia" go over in Oz Baino? It was an entertaining film but it made an effort to go into the lost generation issue.

Nick they were between 13 and 18 which is an incessant worry . . .shades of Cronulla all over again. We're such a tolerant country that I hate this sort of behaviour which seems to manifest itself due to a combination of misguided nationalism and alcahol!

Interesting thought Ces, we actually have a little fort bang slap in the middle of the harbour called Fort Denison, built during the Crimea War for fear of Russian invasion. I guess we'd be drinking Stolchynaya instead of Beer and saluting parades of tanks and military paraphenalia.

Ian . . no fear, cricket's alive and well even if Andrew Symonds is in big trouble this week . . .I think once we become a republic, there'll be an 'Independence Day' tribute rather than Aussie Day.

Oooh, Unity Day . . .too politically correct for most here I'd think. Aussie Day will do because we're all Aussies under the skin.

Padraig, you think? I'm actually a fan of younglings and just a few damage the reputation of many. I mean, my kid's 22 and never been involved in anything like this sort of rampage despite a taste for Yaegerbombs! There were about 80 youths causing mayhem in one of our top tourist spots yet hundreds of thousands celebrated in the city without incident. Little shits that they are.

Hey Teddles, glad you're up and connected. I think you're right about the 'origins' of the day, White Australia doesn't give a shit, its just an excuse for a day off and a piss up. I haven't seen Australia yet. Mixed reviews due to CGI tampering with the scenery and the misrepresentation that Darwin was 'invaded' it wasn't. I'll wait for DVD . . then it's Baz Luhrmann not a doco . . .luke warm reception here, it only lasted a week at the pics. A good movie re stolen generations is Rabbit Proof Fence if you can stand the drama.

I reckon a good Australia Day would be not one from the past that means something to either Aboriginal community OR the colonial invaders. It should be the date of official break up with the Queen. As you said it's time (even past due) for Australia to become a Republic and not stay a subject. And that day would mean something to any Australian regardless of their ethnic origin.
On the subject of racist fuckwits, they should be sent off to an Arabic, Middle Eastern or African country to do some real work and learn manners.
Most Australians are polite and lovely when they go overseas. You don't hear stories of Australians trashing pubs and beaches. But when at home some get out of hand their behaviour fuelled by alcohol. They are a minority and they attract much attention. And your kids did what they did on the day because they were raised in a great family where they were loved and educated and taught manners. Good on you B!

Did you know Commonweath used to mean republic? For example England during Oliver Cromwell was a commonweath (republic).

Gaye I couldn't agree more althought he republic debate seems to have petered out to a whisper, perhaps when all this economic doom and gloom is over, it will resurface.

Well no I didn't my little Hungarian Historian . . .

There's a lot needs sorting in the world. I look back at history and shake my head most of the time.

I reckon Australia day should be the day we become a republic too and I am growing so impatient waiting for that day.

We should keep the 26th of January as a public holiday (we're Aussies, after all, and NEED our days off) but call it something like "Cricket and Tennis watching Day" instead.

AUSTRALIA DAY will be the one when we finally elect to become a republic. Hopefully soon.

Miladysa - we can't change the past and I for one don't subscribe to 'historical guilt' but it really is time to move on.

Me too Melanie . . .it's just choosing the right model that presents the challenge, and I guess with all this economic flurry at the moment, it's low on the Agenda.

I dunno Wuffa . . .It's a shame that the few give the majority a bad wrap.

Then you know it now. :P

Tsup*!* In agreement with what you say, another date would be wise if only to move off from having the same debate each year.

Those young idiots probably didn't even know what the date was when they fell out of bed that morning.

no rampages that you know of... Anyways i'm on leave now, bout to piss off north for a few days! CYA!

Ha Ropi you're a veritable encyclopedia you are!

I don't know Bimbimbie, I think they knew exactly what day it was and used it as an excuse for white supermacism. Shame, I'm proud of my flag and my country and hate to see it abused in this way.

Ryan between you and Paoli on Facebook, not much goes unnoticed! Have a blast! I'm grounded thanks to having no car but the Demon Van . . and I'm not driving that heap of shit anywhere!