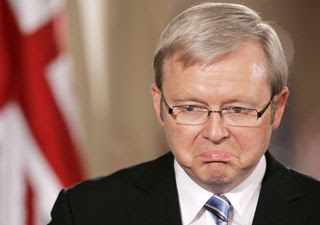 DESPITE calling for wage restraint, Australian Prime Minister Kevin Rudd has secretly paid two advisers top-ups to bolster their $200,000-plus incomes. Chief Adviser Alister Jordon, Kev's 29 year long serving confidant has received a massive pay rise while the rest of Australia is being asked to 'tighten their belt' or 'freeze wages'.
Despite calling on workers to defer pay claims, Mr Rudd intervened to have a salary bonus paid to his "boy wonder" chief of staff, Alister Jordan, his 29-year-old long-serving confidant.

Another senior adviser has also breached the Government's official salary cap, boosting his "principal adviser" salary above the top level of $192,000.

With superannuation and overtime added to salaries, principal advisers earn close to $250,000 in annual income.

So exactly what brainstorming advice has Mr Rudd received:


There is nothing that these advisers have offered that can't be resolved with a click on Google.

Kev is now talking about 'freezing' wages (kinda hypocritical don't you think now that his top dogs are on over $200,000 pa) That was tried by the Frazer Government over 20 years ago and resulted in some of the worst strikes Australia has ever seen - another example of great advice.

Anyone with a "web browser' could advise our Kev,as he and his adviser staff are not capable of producing anything original that has not come out from another political source. Kevin, please pay me 190K per year, I reckon I could "Google" a few good ideas from the northern hemisphere for domestic consumption! 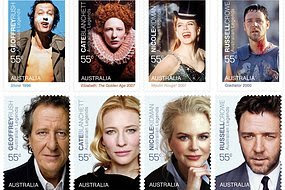 Nicole Kidman (born in Hawaii), Jeffrey Rush (dinky di and born in Toowoomba Qld), Kate Blanchett (natural born Melbournian) and Russell Crowe (born in New Zealand) The Kiwis aren't happy . . .but we Aussies have the opportunity to lick our stars.
Posted by Baino at 6:22 pm

Oh dear, and it all seemd to be going so well, compared to our politics here in Belfast anyway. But perhaps that's not the comparison you need!

What's even worse, all the British emergency measures have achieved f*** all and the slump gets ever deeper with thousands being laid off every day, repossessions rocketing, businesses collapsing in droves etc. The last thing Oz should be doing is copying the clueless British.

There hasn't been much talk of wage freezes in the UK yet, sackings are the order of the day. But wage freezes or part-time working would be better than sackings.

Those at the top will always get away with boosting their own incomes until such time as angry voters take to the streets and scare the government rigid.

It would be funny if it wasn't so serious our Me Too PM was Chief of Staff to one of our former QLD Premiers and they wanted to kill off the Koala by building a toll road through one of their habitats. He also had a segment on one of the talk back radio shows on his campaign to become PM, I had to switch him off he was so full of nothings*!*

Boys will be boys, they are still playing Monopoly. We the little folk are dealt the 'Go to Jail' cards while they (politicians) collect £200 at every corner!

Thankfully we now have peel and stick stamps and there is now no need to lick the Her Majesty's back side!

Over here, the 'Governator' has threatened the California State Legislature that unless they come up with a budget before the deadline, they will be the first ones to go without a paycheck!

Baino, this post brought a tear to my eye. And the tear was blue.

If they were born in this hemisphere, they are Australian, come on!

Re. Friday Fuckwit. Well, no surprises there. But aren't they the union bosses? Aren't they need to be kept quiet to avoid millions of dollars worth of strikes?
Politics. Obama will save us all. Meh.

Hi Jenny welcome over to the dark side. It only proves they're all the same I guess.

Yeh we're experiencing layoffs too although we're not 'officially' in recession. As for copying the British, looks like Kev's advisers just surf the net to come up with their ideas - I'm so cynical.

Ha! Bimbimbie, so much for the environmental portion of his election promises, they haven't done anything . . .

Granymar, can't tell you the last time I actually used a stamp . .oh wait that would be yesterday but someone else did the licking.

Gotta love Arnie even if he is on the wrong side of politics.

Ryan don't get cocky, I'm still crying pink tears. Thanks for the hot tip. I was pressed for time.

Haha . .fair 'nuff Gaye. . .we can claim them as ours. Look at the footy players . .half are Kiwis or Islanders! Well he might not save us all but the man can dance!

I would love to lick those stars! Be back later for more.

Yeah, It is horrible that nowadays politicians have to bribe anyone for better results. They could do it for free! :) But seriosly, in Hungary it wouldn't be a great news on the other hand why didn't they use graphs which is a very tricky things and you can be a real sly if you use them well.

... and you're enjoying licking Russel, aren't you.

Look, I think one thing we can be sure of, courtesy of GWB, you don't have to be smart to rule a country.

Ropi I think it's the same the world over with slight differences only. I wouldn't mind if the advice our Prime Minister was getting was 'original' not copied from other countries. I hope he's set some very high key performance indicators for these guys!

Erm . .not a fan of Russell I'm afraid and yes, I voted for him . .He was our new hope (Actually I really voted for him because John Howard would have resigned mid term and the prospect of Peter Costello as Prime Monster was not pleasant. So far, he's just about blown the budget surplus . .

Hi Melanie, welcome aboard. Yep, I remember her when she had a flat chest, red hair and thin lips!

Yeah, they do that over here, too. 'Wages must be frozen - psst, my old buddy cabinet member, don't worry, you and I will get a raise'

Politicians, huh? Same the world over.

Not sure I want to lick Russell Crowe though. He might throw a phone at me.

you pay your turkeys a lot more than we do, and you are a bit smaller country... so you must have gazillions to spread around to all those flunkies?

Hope you have been well!

The mere fact that he has followed in the foot steps of the Irish government leads me to believe he is in fact a fuckwit. Don't worry though if he is anything like our government he'll be doing a dirty backpeddle shortly.

Haha . .Jay that's when we refer to him as a Kiwi when he behaves badly. When he wins an Academy Award, he's all ours!

Hey Wuffa . . .I wish . . .it's very annoying given that everyone else is in a wage freeze or redundancy phase.

Hey Nonny . . long time no see. I've sent you an email but not sure if it's still the right address. Nice to see you alive and well.