The First to Go 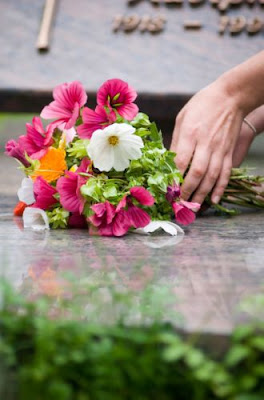 I used to have a crush on this guy at Uni . . I'm prone to crushes . . always have been. Tall, rugged looking with brown wavey hair and blue eyes. Infectious smile and a slightly hooked nose that gave him a Robert Redford'ish look (Don't laugh he was hot in Butch Cassidy and the Sundance Kid!) He had the body of a surfer,played golf at Pennant level and was part of the group I hung around with during that time. We attended lectures together, joked, laughed. He scribbled on my lecture pads and we shared smokes on Level 11. The only problem, he belonged to someone else! She too was lovely,friendly and a pretty good golfer herself - and after I met my own true love, we were invited to their wedding and kept in touch for a few years.

After a long distance move to Melbourne chasing a job, the marriage became unsteady despite the birth of their pigeon pair twins. He was diagnosed with a brain tumor. She couldn't leave him while he was ill. The tumour was successfully removed but the effect on his personality (I am told) had an even more negative effect on an already crumbling relationship and they separated and finally divorced. It wasn't pleasant and I never saw him again although I kept in touch with his wife through other friends. The last I heard of him was that he'd started a coffee shop in the same town where my Brother in Law lives and it was via him, I got the news.

Today I was told that my uni crush had hung himself on Sunday afternoon up on the Central Coast. I don't know how I feel about it.. . .I haven't seen or heard from him in 30. In fact I can hardly say I 'know' him . .I doubt I'd recognise him in the street even if I saw him . . for me, his suicide is sadly painless. I don't really feel anything except a sense of awful waste - he was 53 years old.

It is so very sad when someone, anyone, let alone someone you have known becomes so desperate that this is the only course of action open to them. I don't know why he did it, nor will I probably ever know. But his children will now be beneficiaries of a reasonable estate . . I wonder how many times in the past when things were really tough they 'wished' they had more money. . . just shows, you should be careful what you wish for.

He was the first of Ray's golfing friends to leave us and sadly by his own hand.

Apparently he was a difficult man to deal with in the latter years, but nobody deserves such misery. Bless you Denis . .I hope you're in a happier place.
Posted by Baino at 4:59 pm

Oh no. How terrible. When my friend C's secondary brain tumour from her breast cancer got bigger, it affected her personality. It's awful for their loved ones - like living with a different person. His poor family. And poor you, I'm sure you're grieving too. Hugs, Mrs B xx

I think that we tend to continue to feel towards people what we felt when we last knew them (thus the problems that were created by Friends Reunited!), so it's not Helen's over-40 feelings that come into play, but those recalled from thirty years before. (There are physicists who say it is all in the same time anyway).

It is always sad to lose a friend, but to know they have been instrumental in its ending, needs time to come to terms with.

I have known two men who have taken this route, different ages and in different countries. The effects ripple through many lives for a very long time.

Think of him him as the blue eyed guy with the infectious smile and drink a toast to his memory.

A piece of us always goes with someone we knew. It's terrible to hear of an acquaintance's passing and more so if it was murder or suicide. Battling those demons sometimes take the ultimate resource. I am sorry to hear about your crush. It's sad any way you look at it.

Very sad - Someone I knew in school did the same a few years after we graduated. A terrible waste and if only they could have asked for help or turned to someone.

Oh, no. To survive so much and then this...it's terribly sad. His poor wife and kids, and all his friends, you'll all be in my prayers. Peace and hugs, B. x

My aunt's neighbour hung himself yesterday too, down in the depths of rural Limerick. I expect there'll be no shortage of it in the next while.

Well it is a very sad story, but I find suicide wrong in all cases.

Sorry to read this, Baino and I admire you for writing it.

It's so sad when people's lives go wrong for whatever reason and they resort to suicide as a way-out. Those left behind carry the guilt for the rest of their lives.

I heard a comment on the radio yesterday about the suicide of a member of a wealthy family.

"The first suicide of the recession"

What an appalling thought!

Just remember him as he was on Level 11 ;D x

Suicide is something really hard to understand, particularly as the person concerned tends not to say anything about their intentions. A profound sense of inadequacy seems to be part of it.

It's always deeply traumatic for those left behind, but at the same time he himself felt there was no other way out of his despair.

All you can do is remember him at his best before his sad decline.

What's awful EM is the fact that he took his own life. Actually having not seen him for close to 30 years, I'm not grieving, it was just a bit of a shock when another old acquaintance rang out of the blue. Bad news travels VERY fast.

Ian that's very true. I remember him as he was, young and vibrant and friendly. I didn't know the ageing man at all.

Actually GM he wasn't the first to pass away. There was another of the 'golf crew' who became a very close friend and colleague who died from a brain tumor six years ago but because we were so close, I dont think of him as of that time. I don't even know if Denis was in a relationship but you have to feel for those who were close to him.

I often wonder if suicide is a desperate or selfish act Ces. I simply don't understand it at all. I guess I'm very lucky to have not sunk that low into a depressed state.

The eternal problem Quickie. I don't know whether anyone saw it coming or not, either way a total waste.

Oh Thrifty that's awful. I've yet to find out why he did it but I know he had several 'failed' businesses over the years. Even fell out with my brother in law many years ago when they were partners. I really hope it wasn't related to financial reasons. I know someone who also committed suicide because he was afraid to tell his wife that his business was going under . . hardly seems right.

Ropi you're very honest. I must admit I have trouble coming to terms with it unless it's someone who is extremely unwell and wishes to end their life.

I'll probably never know why Steph. I think I'd rather live on the streets than take my own life but having never been 'there' I can't say for sure.

Nick in a way it's fortunate that I hadn't seen him over the years and in a way unfortunate that the only 'reports' about him were negative. I never got the 'other side of the story'. I don't know how much was due to him 'changing' with age or as a result of the tumour changing his personality. I'm sure someone somewhere loved him and is feeling great pain right now.

My honesty has caused me a lot troubles.

On my "bLogger" post you mentioned Skype. I just recentry realised I have it on my PC.

Sad. Suicidal people seldom see their situation with the clarity we do, to know the full impact of their actions on the people they leave behind.

One of my best friends from school killed himself a few years ago. We'd drifted apart by then as he'd gone off the rails a bit, but I couldn't stop thinking about him for ages.

Oh no. You must feel pretty displaced, so hard to write about. Much hand squeezing across the waters.

Suicide is reverse Darwinism, death from no apparent physical reason. I so hope evolution doesn't catch wind of this.

You chose some powerful subjects.... It's a remarkable thing that could drive someone to do that to themselves... what must the brain be thinking, how depressed must you be to decide that is the answer. If you 'know' the person, it must just make you wondered what happened to put somebody in that position ... really sad...

May he Rest In Peace.

I know a blogger who recently did the same. Her blog is still up as a memorial. I had only been there a few times so it was quite a shock, but apparently she'd been battling depression for quite some time.

I'd never consider it, myself. But that's me...

I have known two men who have done this and used to decry it as a selfish thing to do; leaving loved ones behind feeling guilty and distraught. However, after struggling with the temptation to do it myself and successfully overcoming it, I understand that it is not that at all. Instead it is an action taken because they feel as though they have nothing of worth left. What the evil of depression and anxiety does is convince that person that everyone they know and love will be better off without them. Such incorrect thinking has so much power to damage so many people.

And yet - let's face it - saying that you're feeling suicidal or even a bit depressed isn't exactly dinner party conversation. Asking for help can sometimes be even harder, if not impossible.

Have a drink for him and hope that he's found the peace he needed (if only in his own mind).

TMc I think we've all been 'touched' by it somehow . . although this is the first personal experience of someone actually following through.

Clearly K8 those who do it think they have every reason in the world. I just wish they'd share or perhaps that those close would listen. We're not very good at picking up 'hints' these days.

That it does Paddy

Moon they choose me. How could I not post this. It's awful and if someone pipes up asking for help because of it . ..job done.

Realy Megs? You'd think something would come through on the blog about her being depressed. I have a couple that I worry about, they have their ups and downs but emailing sometimes helps.

Kath thanks for your honesty. I know your story but many don't you're very brave to admit to it and to have dealt with it so successfully. You're also very lucky to have such a wonderful husband and supportive family. I don't know if Denis did.

I'd do anything I could to encourage someone to ask for help, even to the point of being a bit of a nuisance with my questions and probing. It's a shitty thing to happen to anyone.

I have a couple that I worry about, too.

But not you, thank goodness!