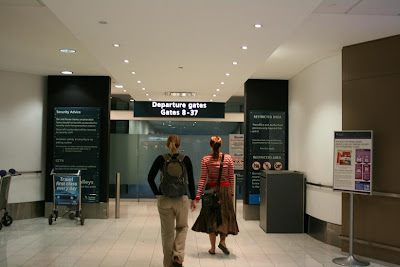 Not much to post about today. Well the girls got off OK on their early flight this morning. No tears you'll be pleased to hear. Two hours in Auckland and another 30 hours in Santiago waiting for their connection to Rio. Adam spent the day in bed (he pulled an all-nighter watching the Matrix and assorted DVD's before our early start this morning then crashed and burned at 8.00). My house is friggin' spotless thanks to cleaning therapy which includeded a total spring clean of ClareBear's appalling room and the linen press. (I know, most people go for retail therapy when they're stressed - I get out my crevice tool and clean like a whirling dirvish).

I recharged some batteries - two were not rechargable - don't go there, they explode! Apparently that crackling bangy noise they make is funny to 21 year old blokes. I almost gained kudos for the explosion after I recovered from the myocardial infarction but that was squashed by condemnation for being so stupid. Alright . . I didn't have my glasses on!

I changed Drummerboy's sheets . . not earth-shattering to you but a major coup for me and his room smells sweet.

Boidy got stung by a waps, we're not sure what kind of waps, it was a big waps but not a mud waps but it was in his shirt because he left it outside on the pool fence. See, I told him if he leaves clothes on the floor and hanging around, something stingy will get into them. Nyer!

I scored three towels, 4 ice tubs, a pair of 36cm waist board shorts and two boogie boards and half a caramel mud cake after the party . . .if they're yours, please come and get them or they'll go to St Vinnies nextweek. Except the cake, I have plans for that.

And . . we've just discovered 2 litres of Creaming Soda, 1 bottle of Pink, 1 Litre of Lemonade and a dozen Carona's left beside the bar fridge from the weekend - BONUS! Ha-ha, read it and weep if they're yours, they're in the fridge for the next half hour! Don't bother claiming them!

It's foikn hot and humid so excuse me, I'm off for a dangle in the crystal wateryness of our pool and a chotapeg with my little soldier boy while you-know-who is eating aeroplane food over Easter Island . . . (her bedroom is soooo clean and tidy right now!)

Right, get the boy to fire up the barbie! 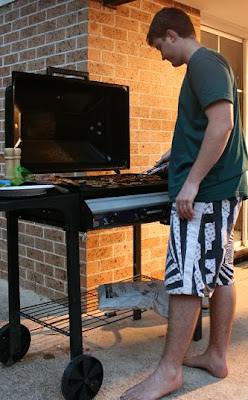 Sounds like a great day Baino! To finish it off I hope you get the HUGE rain drops, thunder and lightening from our way :)

Hahaha . .wasn't it great! I used up 2G of flashcard and I bet I didn't get a single photo! Great show and fantastic rain - it's still bucketing down. It's cool and rumbly here right now. (Lily is squished in her little thunder corner between the couch and the coffee table!

Baino, I’ll start with a (((hug)))! The first photo brought back memories of the day I left home to go live and work in Germany many lifetimes ago. I walked the walk, tall and un-turning, repeating the mantra: No tears, no turning! When I got around a corner out of sight it was a different matter.

Tears are natural and healing. They are also a sign of caring! Now down with the dusters and play a little!

Ah Grannymar there you go again with your words of wisdom. They didn't dare look back, Jem left a very unhappy young man standing beside me while I took that shot and Clare was terrified! It hit her all of a sudden that the day had arrived. DB and I were fine. It's a fete accompli now so I'll just wait for the emails.

Aah now, well that send off was not so bad. Well done boss. I clean when I am angry, I remember when I learned that the artist formally known as Nonny's bloke had been been playing away, I calmly told him to pack and leave. Anyone that came to my house to offer sympathy were like "Sorry to hear about John nonny and wow the house is spotless".

Well Baino you only have only left to be rid of now and then you can waltz around your home nekkid to your hearts content.

I'm so foik'n jealous of your weather!

I'm so sorry I haven't been commenting much lately - I save your posts and read them offline with my cuppa T, never getting to go back online to comment.. *sigh*

I would love to see a non-rechargeable battery explode, almost as much as I'd like to see what happens to a lightbulb in a microwave!

Nonny:Haha . . if only! He'll be off soon enough but fortunately just around the corner! Naked . . umm I think not, it upsets the dog. Dancing that is!

K8: Glad I'm your morning entertainment! I blew up a butter container once, I didn't take all the foil off the top. It made a pretty blue flame but no noise.

Um after the storm last night, everythings a mess, strewn with gum bark. I hate those trees!

Baino, any luck finding my towel? Maybe it turned up after the party? All i remember is it is stripey?

MY GARDEN IS MESSY TOO! The storm was great though ;) Looks like those trees will be trashing the outside for days yet ...

Ryan: You will be spoiled for choice! Pop round over the weekend and take your pick!

Anon: Bloody gum trees! I took a full memory card of the storm and didn't get one lightening strike! How could I miss! Fwoooaaar

Busy day! Nothing like keeping yourself busy - I should go away more often then you´ll clean my room all the time! Yo~´ll be pleased to know our hotel room is spotless...and no that´s not because it gets cleaned everyday!!!