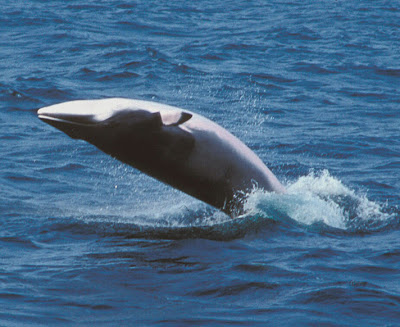 I am against whaling. There is nothing consumable about a whale. I don't see the point of executing harmless animals who are venturing into their Antarctic haven to feed after birthing in the warm northern waters, eating nothing during their 25,000km trip in the name of 'research' when we know fully well that the meat is going to end up on the plates of Japanese. To me it's tantamount to killing Elephant for their tusks or Rhino for aphrodesiacs. It's pure, nonsensical destruction.

I don't even want to go into the dietary habits of the Japanese who have been known to put live baby eels in a large bowl of water with a big block of tofu at the bottom. The bowl is heated, and as they become uncomfortably hot, the baby eels burrow down into the cooler tofu. There they are cooked alive, and served like an olive loaf. Even in Australia the RSPCA had to intervene because Japanese tourists like lobster, brought live to the table and butchered in front of them so that the tail 'moves' as they eat it. The reality is that there's such a 'glut' of whale meat on the Japanese market that it is also made into pet food. Any discussion of evil cuisine begins and ends with this.

OK I am hypocritical. I like fish, chicken, meat . . but in a conventional diet, farmed and humanely dispatched. I don't see people harpooning cows in the paddock . . and since I am quite capable of killing and gutting a fish or a chicken, I see that as reasonable. I would have no problem eating Kangaroo as they are culled anyway or Emu or rabbit or even horse as long as they were culled humanely from the brumby population.

There has been no authenticated published research on behalf of the Japanese that reveals more than we already know, it is obviously a furfy. There have been few peer reviews undertaken by the Japanese since their insistance on such a path of destruction. They found that just a single study dealt with the IWC's assessment needs and was published in an international peer-reviewed journal.

In 2003, Associate Professor Scott Baker of the University of Auckland, New Zealand, and Dr Phillip Clapham of the Northeast Fisheries Science Center in Woods Hole, Massachusetts, trawled through more than 150 publications by Japan's scientific whaling program. They acknowledged that there has been a large amount of documentation produced by the Japanese and then submitted to the IWC's scientific committee. Most of these have been of general descriptive material and not directly related to management of whaling or whale populations which is the mandate and premise of their research. It's just an excuse for legal whaling.

At the moment there is an issue boiling whereby two activists from the monitoring and 'hassle' ship the "Steve Irwin" financed by the Sea Shepherd Conservation Society have been detained after boarding a Japanese whaler. The two boarded the Yushin Maru No. 2 after they made attempts to entangle the screw of the vessel using ropes and throwing bottles of acid onto the decks. Their intention, to deliver a letter requesting the cessation of whaling. Although their captain says it was not an illegal boarding but designed to deliver a letter of intent because the ship would not respond to their radio pleas - they are still on board. The two sides in the dispute have traded accusations of piracy and terrorism since the activists boarded the harpoon ship on Tuesday

Whilst this has caused a lot of controversy, they have managed to prevent the slaughter of whales for 8 days. Good on 'em! In a way, the Japanese have shot themselves in the foot by detaining the protesters. It is now an international incident, and has highlighted the barbarity of such a practice and the stupidity of the Japanese in causing an international incident - but it has given countless Minke whales the opportunity to advance their journey into the deep south.

Why are the Japanese holding onto these two men? Because they want to negotiate a hostage deal. They will release the men if the Sea Shepherd organisation stop persuing them on their trail of destruction. That changes the nature of the boarding to abduction and blackmail.

An Australian customs vessel will transfer two men held on a Japanese whaling vessel in the Southern Ocean as soon as possible if all parties cooperate. The Australian government has agreed to let the Oceanic Viking customs vessel assist in the transfer of Benjamin Potts, 28, of Sydney and Giles Lane, 35, from Britain from the Yushin Maru No. 2. The Oceanic Viking is 'stalking' the whalers to ensure no illegal whaling in Australian waters and until now has had a policy of non interference..

We have to stop thinking about the Japanese as performing a legitimate research operation. Whilst some of the lengths Greenpeace and Sea Shepherd engage in are often dangerous and sometimes dubious the Japanese should be regarded as poachers. They are illegally in Australian waters and harpooning whales for the consumption of Japanese diners. SHOW ME THE RESEARCH!

Environmental group Greenpeace, which has distanced itself from Sea Shepherd's more confrontational tactics, said on Monday it had chased the flagship of Japan's whaling fleet from hunting grounds near Antarctica and An Australian fisheries ship is searching for the fleet to gather photographic evidence for an international court case aimed at stopping Japan's annual "scientific" hunt.

In a purely symbolic act, but one that could inflame bilateral ties, an Australian court ruled on Tuesday that a Japanese whaling company broke environment laws by killing whales in Australia's Antarctic waters. But the Federal Court of Australia has no jurisdiction outside Australia.

Japan plans to hunt almost 1,000 minke and fin whales for research over the Antarctic summer, but has abandoned the cull of 50 humpback whales after international condemnation and a formal diplomatic protest by 31 nations. Why? Are they prettier . . rarer? Or do they simply not taste as good?

It is illegal to fish in the southern ocean but OK to whale? How does that work. We arrest Uruguyan Patagonian Fish trawlers and let the whalers do their dirty business uninterrupted other than the hassling from Greenpeace and Sea Shepherd who insist they are not protesting, but intervening in an illegal fishing operation.

It may be in the interest of Sea Shepherd to keep this controversy running as long as possible, the more exposure, the more publicity, the more people rally to the cause. And, even if their boarding is illegal, and there are suggestions they did a little more than hand over a letter (possibly throwing acid and bottles at the shiop) it's highlighted the barbarity of whaling behaviour and the need for it to stop . . now!

I am fully supportive of non-violent intervention that may delay or prevent the slaughter of one of nature's finest! 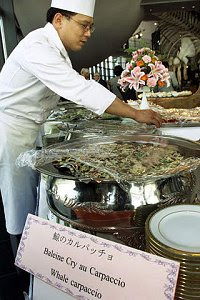 I wish we would send the navy down and blow these fuckers back home. Only then will i enjoy watching Peter dance for joy.

Beautiful photograph! In 2006 I was involved in the whole Australia-Japan year of exchange. Every Japanese I came across had a strong opinion against whaling. Although, many also wanted live lobster for dinner.

Awesome. Thanks for the info. I eat meat sometimes. I kill some of my own. If I cant humanely and quickly kill a creature for me to eat then it lives with my respect. The method of killing a whale is so horrendous, it can only be done by the most heinous barbarians. Civilised people dont behave in this way. If the japs wave their 'traditional' fist in the air, let them go back to sempaku 'hari kari' with my blessing. write to the Japanese consulate and tell them you will not visit their country eat at jap resturants etc etc WHALES ALIVE!!!

Well, it is bad that they eat whales, but then we shouldn't eat chickens, pig etc... I am carnivore so I would die without meat. :P
On the other hand we could sue Lions if they eat Zebras or whatever. :P

Ryan: I'm assuming you mean Peter Garrett who has been conspicuously quiet on the issue, I assume he's up country somewhere hugging voters I mean trees. Its Smithy doing all the talking. They were naughty boys for boarding but the Japs are out of control hanging on to them. I mean 8 days of Meso it's enough to drive you insane!

Anony: not my photo sadly,I've only ever seen a humpback and calf and at a distance. That's a Minke. I like lobster too but after it's been stunned and cooked, not squirming on the plate! Japs against whaling, isnt that a bit like no Americans having voted for George Bush?

Paikea: It's the method I object to and the unnecessary flooding of the Japanese Market. Do I know you, you sound vaguely familiar?

Ropi: You're right, I am a hypocrite when it comes to killing and eating. Commercially farmed meat, especially pigs and chickens, suffer just as much which is why I only buy free range these days but again, this animal's value is in the ocean not on the dinner plate.
Inuit peoples still hunt whale and seal but it's part of their traditional diet, they use every bit and only kill what they need. The japs have modern whaling factory ships and are flooding the market in the name of Research which is simply a euphamism for legal whaling for consumption.

Tis a shame, Baino. Every culture is guilty of some sort of indulgence. In my neck of the woods, we eat pork brains and eggs. :)

The Japanese should stick to developing technology, it is about as far as their intellect extends. I’m don’t eat meet but if others want to that’s their business, once it is done in a humane manner, when the animal is a decent age but above all for a justifiable reason if you want to kill it for nutrition fine but to go killing Wales purely to create jobs, ahh fuck off. The western world are hugely dependant on Japan so won’t agitate them. The Japanese like to rub this in our faces. T’is cock rot my darling, cot rot of the highest order.

Oh and what a most excellent post. I'm off to bed. Goodnight!!

JD: Too True . .I am a nanosecond off vegitarianism. I've always considered it but never taken the plunge.

Nonny: Aww a bit harsh I think their intellect is intact they just have some strange tasts. ANOTHER VEGIE! I think there are more vegies than meat eaters commenting here these days. Way of the future perhaps? Can I steal cock rot please? My abusive vocab is increasing thanks to the Irish contingent!

I know we are a foul mouthed shower of shites. I am not being harsh on them, last month they were out Dolphin bashing, like seriously do something constuctive with your lives. Go to college or learn a trade or even be an artist, just get a real job.

who cares about the whales anyway? just another animal... nice commentary here from a bunch of racists hypocrites.

Here Here Baino, I love my meat and veg, but stick to farmed not wild. And isnt that another issue here. Australia sends the lions share of its A Grade meat to Japan - they actually eat better beef etc., than the Australians! Do they really need Whale meat as well? By the way, it wasnt "Acid Bombs" per say - they were actually "Stink Bombs" - no acid content. As for old mate "Anonymous" at the end - your a fuckwit