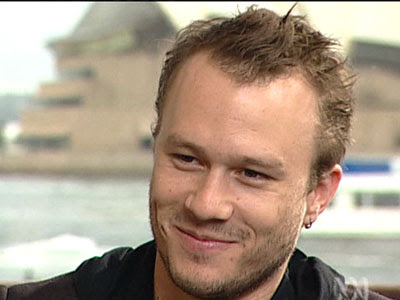 A young actor named Heath Ledger died today. He was 28 years young. Feeling a little peaky with pneumonia according to his publicist, having difficulty sleeping due to his recent role as the Joker in the next Batman installment and expecting a 10.00am massage to soothe the stress. His time of death was calculated at around 7am.
Our office was abuzz with the sad news. This kid is an Australian heart-throb and most of the kids I work with consider him a peer, they were flabbergasted, sad, curious . . how could someone with so much to live for just die like that - he wasn't a Brittney or a Lindsay.

Did he accidentally take too many sleeping pills? Why book a massage if he intended to commit suicide? Was foul play involved? Or was he a troubled young man and his friends didn't see the signs?

It brought back memories of 1990 when I arrived at work to find out that the mechanic who owned the workshop below my office had blown his brains out. We were shattered. Only a couple of days ago, he'd cheerfuly serviced my car and it broke my heart to wonder how someone could get to such a low and desperate point that they would do this rather than face their family with news of bankruptcy. We found out the reason for his early demise as my mother nursed with his wife. She had no idea of their financial state of affairs. He left her and two teenage sons and a lifetime of questions and regrets.

I can't imagine the depths of depression, loneliness and hopelessness someone would have to reach to commit suicide. And while I've been close to it on occasion, my own father made a failed attempt many years ago (although he was under the influence and I suspect it was just 'dramatics) and don't think it hasn't crossed my mind during the dark times of loss and mourning or financial hardshipo, I'm worth a tidy sum ascending the ether but living worth little thanks to debt. But we didn't . . we didn't go that extra step any more than we would have progressed from that other differential step from smacking a small child to child abuse.

What amazes me is how people can keep their depression to themselves. How they can be absolutely blitzed on brain numbing drugs to get them through the day and nobody notices. How they can be outwardly jolly or even argumentative yet inside sombre and suffering. How they shoulder this seemingly alone. How others don't see the little tell tale signs and giveaways.

This isn't really a post worthy of comments, just thinking out loud. Whether young Heath pulled his own metaphorical trigger, was just ill or met with foul play, he was was a new father, a young man with a stella career behind and in front of him, no money worries, a strong family, good health with prospects and everything to live for . . . I sincerely hope he died of natural causes - tragic as that is, I would hate to think of such a future snuffed out by a moment of irrational thought or that he had perhaps made a plea so veiled that it had gone unnoticed.
Posted by Baino at 4:18 pm

I can't believe some people on this earth. Look at this:

Heath was one of the few Austalian Stars worthy of being a good role model for our kids. Shocking.

Nobody knows what another's shoes feel like. We all think we listen and watch, the trouble is we blink.

I dont have much of a comment - I loved Heath, I loved Brokeback Mountain - but I dont know a single thing about this man or his very private life. I did see his grieving parents on the tele and my heart went out to them - they've lost their baby. So Sad and at only 28!

Ryan: I don't know how you found that but hey . . . in a way I hope there is a God who judges such bigots in the way they deserve. I'm really saddened by this little incident. Not because I have a great love of Heath Ledger but he's someone's son, uncle, lover, father . . it's tragic - I've been there and I feel their pain.

Anony: I don't know much about him. I'm not sure I'd put him in the role model category. He was a poor interview subject but he took his craft seriously and did it well. Too young . .just too young and for someone so private, it's now splashed everywhere.

Grannymar: You are so right and in that blink of a second, we can miss a clue that could save someone's life. I've become very 'tuned' to nuances to the point where I've been accused of reading too much into things.

Babysis: Me too. I thought he was a real talent and that was a brave movie for he and Jake Gyllenhaal, he was an asshole to interview but had so much potential. Whatever nailed him, I really hope he didn't take his own life.

It's not so much about Heath (although for some reason, I feel really sad about this one) but the realisation that there are people out there really hurting and we often don't pick up on the little tell nuances that might enable us to intervene.

It's the nature of the beast - depression cuts you off from everyone.

Ignore Westboro Baptist, they are a bunch of sickos - they're the guys who picketed Iraq veterans' funerals. There are only a few dozen of them, mostly family members of their leader

So incredibly sad. What a loss.

I think people have all sorts of reasons for concealing their depression - embarrassment, feeling of failure, feeling nobody will take them seriously, feeling they'll be shunned. It's tragic that people can't reveal such despair until it's too late. Sometimes they make vague references like "I'm losing the will to live" or "I can't go on like this" but people think they're just joking or it's just a way of talking. Tragic anyway that someone so young and with such a promising future is gone.

Having fought with the old Black Dog since I was a kid, I think most times people say nothing at all

Nick and Ian: If someone's determined I guess the'll go through with it no matter what. It's the ones on the cusp that might be saved although those close to them are often the last to realise that they're suffering depresson or the lack of will to live.

Very sad in deed. Was he not a heroin addict? (Could be wrong). I cannot understand depression, not that I don’t appreciate the implication and despair it can bring but I am baffled as to how a person can reach suicidal levels. I mean there are people starving to death in the world, people who live in absolute poverty, people who continuously live not only in fear of their own lives and safety but worse, far worse, fear for the safety and lives of their children. Maybe that is an awful thing to say but depression and suicide is just something I cannot fathom at all.

It's a tragic loss - he was cute, he was talented and he had so much to look forward to. I find it hard to believe that his death was intentional though who knows, as you say, what people live with. Depression is a damnable illness and no one who hasn't been there can ever understand what it's like and what it does.

Nonny: I don't believe so. You might be confusing him with his role in 'Candy' where he very convincingly played one. Then who knows. Money, fame . . seems that drugs fall into the package.

Av: We think so alike it's scary. I only know two people who have confessed to have being diagnosed with clinical depression. It's an incidious condition. I suspect there are many moor who haven't been diagnosed but would benefit from the help.