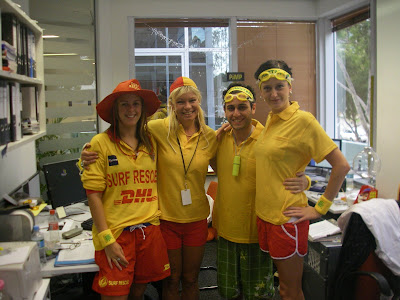 Clare, Andrea, Adam, Jaqui - All Ozzie Lifesavers
Posted by Baino at 8:52 am

It's the middle of freakin' January! Tell those kids to stop having fun and put some clothes on! Geez! It's forkin' January by Gawd!
:)

Not written by myself, but i feel it's appropriate:

When I think of a 'typical Aussie' I get an image of a bronzed man or woman, who have Milo and Weet-Bix for breakfast, Vegemite for lunch, and a bbq and beer for tea. Tim-Tams are the national snack, beating the Poms at anything the national sport (although we're getting tired of that, time to move focus to the Yanks). It's getting in there and having a go. It's calling your best mate a total bastard, and your worst enemy a bit of a bastard. It's the Hills Hoist, the Holden Ute, Gum Trees and Simpson washing machines. It's dusty kids with big smiles. It's verandah's as large as the rest of the house.

It's Victa mowers cutting foot long grass that was only mowed two weeks ago. It's having a laugh with your mates. It's scones, sheep stations the size of European countries, and Tim-Tams. It's being girt by sea and pissed by lunchtime. It's about being so lustful for international recognition we celebrate winning against the poms in Darts. It's about a Highway which kills more people each year than die by murder. It's taking a criminal and making him a hero. It's "no worries mate", "she'll be right mate", and "Waltzing Matilda" all rolled into one. It's shielas, blokes, wankers, pooftas, dancing queens, wowzers, Jumbucks, Jackaroos, Jillaroos, Walleroos, Kangaroos, Koalas and an animal that is so strange that when it was first discovered, people thought it was a joke.

It's women in unfeasably small bikinis putting coins into your parking meter while you're off getting pissed. It's immigrants from the 50's saying they don't want any more immigrants. It's making a feature film about a bunch of traveling queers and calling it a national triumph. It's taking our greatest military defeat and turning it into the birth of a nation, while simultaneously ignoring Black Sunday against the Germans.

It's footy in the office, betting on the Finals, supporting your local team (even if half of them come from Melbourne) and code wars in the Pub. It's massive bronzed Aussie blokes with arms like powerpoles meeting you at Customs with a smile and a G'Day. It's calling out to the man on the boundry for thirty minutes to turn and wave, and when he does, give a cheer and start all over again. It's having 9 of the 10 most deadly land animals on the face of the planet in our backyards.

It's the population of New York occupying a country the size of Europe. It's about standing by your mate, no matter what stupid thing he's done now. It's about a tennis star who is called a brat with one breath, and a bloody legend the next. It's about flying over the centerpiece of our nation on the way to Bali or Malaysia. It's Melbourne and Sydney competing with each other as to who is the best city in the country, while the rest of us know they're both rubbish. It's our distrust of politicians and moral elitists. It's having the world record for the single largest mass shooting, which the Yanks can't seem to beat no matter how often they try.

It's surf lifesavers who are the envy of the world. It's meat pies with sauce, calling French Fries chips, and buying wine by the cask. It's hating the French, beating the English, and laughing at the Americans, who think 'World Series' means only two countries are allowed to participate. It's about arguing whether it's Cabanossi or Kabana. It's the Blue Heeler, the Kelpie, and the Tuckerbox. It's making cars so good that we export them to every Continent except Antartica.

It's inventing a sporting catch-cry in three seconds, while other teams supporters plan for months. It's chasing fish poachers halfway around the world just so we can confiscate their boat and sell their catch. It's cricket in the backyard, over-and-out, batter fetches, one-hand-one-bounce, electric wickets, and tipsy-runs. It's having some of the brightest coloured birds in the world, that you can't see in the trees no matter how hard you look. It's Magpies calling in the morning, Crows cawing in the afternoon, and Possums climbing in your window after dark.

It's getting a Kiddy Pool and suddenly finding your children have a lot of new friends. It's wearing thongs on your feet, not up your arse. It's walking into the shopping center bare-chested for the guys and shorts and bikini top for the girls, and no one gives you a second glance. It's budgie-smugglers on the beach, and tackle out at home. It's Hoop Snakes, Drop Bears, Electric Trees and Kapop Birds. It's leaning over the fence to have a yarn with the neighbours. It's playing a code of football so tough and without padding, overseas visitors think we're mad. It's not knowing for sure what half the words to the National Anthem are, but still singing what they _might be_ with pride. And it's a sports flag and team colours which have nothing to do with the national flag.

Having been watching Sea Patrol for the past couple of weeks, D and I are both practicing our Aussie twangs when we speak. And that reminds me, I need to get some more Tim-Tams!
;-)

My flowering gums, I should add, are doing Australia proud - in full flower and humming with bees.

Bloody hell Ryan . . I love it! You should blog! Was that a Sam Kekovitch rant? It's very true eh?

I'm so disappointed that Gautier didn't even get a nomination.

I am all set for tomorrow! Bar the green salad, booze, ice, cake,the mowing and the tent city! I have a mattress you can pinch for the ute! (hot tip . . don't park under the trees!)

You have gums? Don't park your car underneath them .. bits fall off! Today is prep day so I'm Ms Organised. Tomorrow is our big bash! Bit nervous about the numbers. I have a lot of 'mit in ma freej' Many animals have died to feed the slippery sliders.

At least the flowering gums don't seem to chuck their branches down quite as savagely as the blue gums - but yeah, I'm frequently picking up detritus from the lawn - but those flowering gum seed pods make great weapons for chasing off cats or very aggressive guinea fowl!

And oh, yes, I have flowering gums - four of them and two huge Australian Cherry Trees and a bottle brush on the verge - your trees do remarkably well here, which is why the National Parks authority are so frantic to get rid of them - can't have all these alien invaders you know. Shucks, guess I'd better go too!
;-)

Phew, they're welcome to save my life any day - the guy too, he looks rather gorgeous! Mental note - must just pop over to Sydney, go for a dip and develop breathing difficulties.

Hehe i knew you would like that one Baino. And i've decided that the ute will be making a post Australia day appearance for a few hours, then back into it's concrete and brick cell after that :)

For the second time in a couple of days comments are lost with this notice: 'Google error, Bad Request Your client has issued a malformed or illegal request.' It happens when I use open ID. :cry:

GM: Sorry bout that, you're not the first commenter to complain. Someone else thought I was deleting their comments. Looks like we're back in business!

Anony: you and I definitely spend too much time in front of a PC!

Jaysus, it's hard to look sexy in yellow but those guys would look good in anything!

Just as well the national colour of Ireland is green 'cos Irish skin would NOT look good in yellow!

Happy belated Australia Day, Baino, Clare, Adam, and the rest of you Ozzies. :)

Nice one!
Ryan's comment was great, thanks for that it brought all the memories back.
Happy Australia Day (not saying belated, these days it feels every day is like one - homesick or what!)
Gx