She is My Lily and My Rose (Name that Song?) 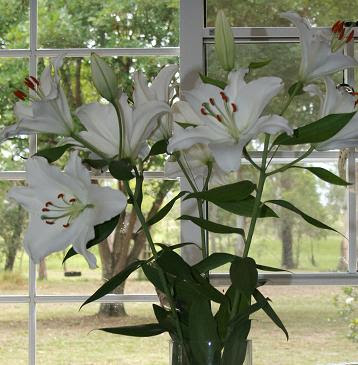 It's not long until I surrender my daughter to the world at large. I've encouraged it. I started it. I perpetuated it, she continued it. But now it's getting serious. Paraguayan and Brasilian visas are procured. The inoculations have been completed, the medico letters for her myriad of drugs acquired. The backpack and hiking shoes have been purchased. The entire trip has been planned and booked. The wardrobe has been cleansed and the farewell party planned. It is time she left. And we are both coming to realise it. Our only worry is the troubles on the Ecuadorian and Colombian border at the moment but what can you do?

Frankly . . I see little of her anyway, she's 23, independent, financially secure and leads a life of her own. She costs me little more than a bottle of shampoo and the odd meal so our 'estrangement' has been coming for some time. I find myself increasingly 'teary' about her departure, as I would if it was my best friend and this from the Iron Maiden is rare but I think I'm mourning in advance and at 5:30 am on 31st January, I'll be as cool as a cucumber and ready to let her go. I'll serenely wave goodbye and pop off to work.

It would be easier if she was a horrible person. Sure her bedroom's a mess and she can't cook anything that doesn't involve chocolate and her willingness to chip with household chores can be a bit slack but she's a terrific companion. When we're home alone, we indulge in seafood picnics or go out to dinner or spend a weekend in a posh hotel and shop. There's not a day goes by when we don't email or have some sort of verbal exchange that involves advice or direction. And when I'm irate, she has her father's talent for calming the waters and making things right. She doesn't need me any more. She is fully formed, fully fledged and fully ready to find her way in the world.

When we do get chatting, we're normally like two girlfriends but lately, the signs have been there. She's like a chick who hasn't quite got its flight feathers but wants to take the plunge off that tall cliff and I'm like the hen who has to migrate but doesn't want to leave the chick behind. The timing is right. We're niggling at each other, we're arguing, we're getting into not so deep and meaningful D & M's. Something we've rarely done in the past and both recognise is a natural and obvious way forward. I'm demanding and she's unforgiving . . . but she knows when she's overstepped the mark or more to the point, how to keep the peace. Bless her . . . she turned up with the most beautiful bunch of white lilies (my favourites) as a little apology for a contretemps we had the other night and rarely are they in apology and frankly, she wasn't the only one to blame . . I went off in one of my tyrades! It's not the first time she's done this but the first time she's done it to say she stepped over the line. She is sensitive and sweet and tough and everything I hoped a daughter could become. This old Sansai has trained her pupil well but it's graduation time!

It doesn't stop me wanting to chain her to her doorknob or her wanting to feel the wild wind in her hair but we both recognise that this bickering that's going on is very much like our backyard magpies . . .they have an annoying son who will not leave . . so between feeding him, they bully him . . .a couple of days ago, he left. I don't want it to get to that point with ClareBear. Her leaving home should be a happy new chapter in both our lives. I need some space as well . . I have things to do, plans to fulfill and now that my family are all growed up, it's time to start getting into it. Thanks for the Lillies darling, they're lovely and they smell gorgeous!

Now . . time to focus on DrummerBoy because he's not long for the nest either bless him! 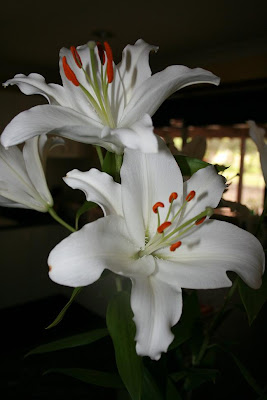 That tension and feeling of dread leading up to a youngling flying the nest is truly horrible.

I waved my eldest fledgeling off for six months recently and we went through all of that. Like you, we'd had lots of preparation with longer and longer periods of absence but my nest still felt horribly empty for a few days afterwards. The younger chick soon put paid to that!

It's tough being a mother hen but it has it's rewards. You should be clucking with pride!

Best of luck with your return to work on Monday!

We mothers never really cut that cord, it is made of very strong elastic to give our offspring the freedom to live their own lives, make their own mistakes, as we all do, and hopefully learn from them.

Let ClareBear flap her wings and fly. The bird will return singing a wonderful song of her travels and experiences that will sustain her for a lifetime.

What better gift can a mother give her baby!

It must be agonising loosening the maternal bonds, but it sounds like you're resilient enough to accept the inevitable fairly gracefully. But you'll always feel protective and responsible and no doubt a bit guilty about things you didn't get right. My mum still does at 85!

at least you will have positive memories.

Steph: I picked you as much younger with a young family. I think DrummerBoy is actually quite looking forward to being an only child for a while although he's talking about moving out mid-year. I am very proud of them both. Euwww . . work on Monday . . I'd almost forgotten. I quite like the retired life!

Grannymar: So true. Everyone of us that moved out came back with a vengeance. BabyBro had a caravan in the back yard, HippyBro broke up with his wife and lived at home for 10 years! I went to the extreme and built a house next door!

Nick: That is so true, my father referred to me as his 'little girl' when I was in my 40's!

Ropi: Fortunately the world is a smaller place now with the internet and Skype and IM . . I'll visit her next year when the fun travelling has ended and she'll be home for Christmas. Remember to give your mum a hug a day . . she's earned it!

I know, how well I know, what you are experiencing .

When my daughter,Carol, married and moved 1,000 miles away to Chicago, I couldn't quite believe it was really happening. I kept telling myself if I didn't think about it, it wasn't true.

We had spent every day of her 21 years together and I didn't know what I would do without her. She was flip, she was fun, she was affectionate, she was CAROL! She wouldn't leave us.

But, one day a flatbed truck came on our street and loaded her little Pontiac up for the trip to Illinois. It was real then! She was actually going, and my heart was broken.

Baino, that was 1976. Thirty two years ago and I miss her just as much now as I did then.

She calls, she sends cards, she emails and we visit back and forth as much as possible, but I still wish I could call her up and say,"Let's go out for lunch today."

Nancy: My one big fear is that she'll meet someone special on the other side of the earth. Fortunately, she's a beach girl and I suspect he'd have to be dragged back to Oz! 1000 miles I could deal with, it's 12000 I worry about.

But, she may never want to leave her beloved country... Hope that she has a wonderful adventure in South American and then coming running back to Oz and you!!!!!!

Awwww Anon. It's heartfelt but there you go . .I encouraged it and I want it to happen for her. All things must move forward. Steel yourself! And hope the old adage is wrong:

A daugher's a daughter for all of your life, a son's a son till he takes a wife!" mmmmm . .lets see how that one pans out. I've got one of each!

And nobody guessed the song? Lily of Laguna . . my grandma and father used to sing it to us as a Lullaby . . PC not withstanding. I've only just discovered that it's an old black Tennessee song:

So there you go. Learn something evey day.

There was another bedtime song -

Go To Sleep My Baby . .again, an Alabama lullaby, where did a Lacashire Lass in th early 1900's get these from? And manage to pass them through four generations . .I sing them both to my very young niece and nephew.

Hhehhee, looks like you had a hard time hitting the pillow last night ;)

Ahh poor Baino, my mother was thrilled to see the back of me. I just don't think you can have two women in one house we get on relitively well since I came back, perhaphs it will strenghten your relationship!!

A Lancashire Lass would have picked up this song because it was a huge favourite in the Music Halls at the beginning of the century.

Welcome Keith . . um a Lancashire Lass I am/was . .certainly my dad and my gran. Do I know you?