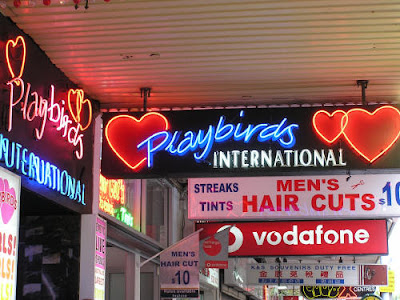 We love our signage in Australia. To the point where everything available is plastered with a billboard or advertisement, it's one thing I noticed when I first came to Australia as a child was the inordinate amount of advertising on shop fronts. This was in the day of the 'main street' when shops aligned the main road disecting the town. Each had a canopy or verandah to shade the shop from the searing heat, something which you don't see in England. Adorning these overhanging canopies were and indeed still are a barage of advertisements. Outside, the shops there would are sandwich boards, the windows are littered with advertisements for the goods inside.

Then there are the warning signs, everything from girls riding horses, to children crossing, flashing school zone lights and of course the animal warnings on freeways (as if you're going to slow from 110 when a wombat crosses the road - splat!). 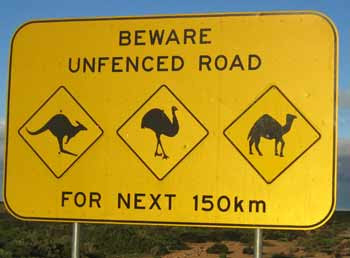 I dread driving into Sydney. Small city as it is, it's now littered with tollways and road closures which force you into tunnels where you have to pay a toll. And since I don't have an electronic tag on my windscreen and cash tolls are few and far between, I'm forever being fined for taking the wrong route. And with signage like this how the hell am I supposed to take the right lane? 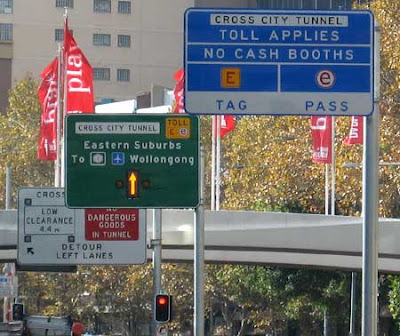 Our little enclave is a bit Brigadoonish. We live in a single street of five acre blocks. It's a dead end and whilst it's surrounded by a golf course on one side and new suburbs on the others, there is no street lighting, no lanes marked, so the law permits us to drive 100kms - although only the bitch across the road seems to want to do that on a regular basis! Ah, but you know that suburbia is encroaching and changes are on the way when you're woken by the clang of a mattock and two men dressed conspicuously like council workers begin having an erection! 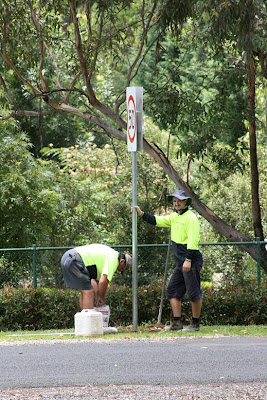 Yep. Obviously takes two - one to pour the cement, the other to hold the pole! Snapped yesterday. Right at the bottom of our driveway now stand two speed warning signs. Well that will keep 'her across the road' from peering over her four wheel drive dashboard as she belts along the middle at 100! Or will it? It's just a matter of time before they paint double yellow lines and put the speed humps in! 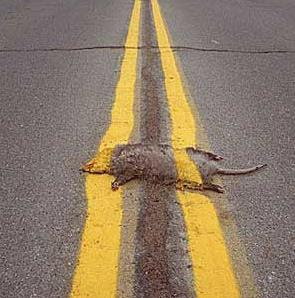 The e-pass on the dashboard is great. Elly got me one so I am not scrabbling about looking for Yo-Yos every time I go to Dublin. I need to go through two tolls on the way down to Elly and again on the way back and I believe the charges went up again yesterday.

I live near a church and every Sunday/funeral our road gets used as a car park. One of my neighbours got so fed up with people partially blocking his gateway, he painted his own double lines and a yellow box across his front gate. It worked a treat but the council soon came along and destroyed his efforts.

I love your Flicker pics btw. And especially your woof friends!

I really dont understand how you can get fined for going into cashless tollways without an eTag?

I mean, firstly, there's the fact that it takes a total of 25 seconds to complete the form to get an eTag, and then they send it out to you (but clearly you are waaaaay too busy searching for images of roadkill on flickr to fill that out).

Secondly, the roads are clearly marked by GIANT BLUE SIGNS that say "NO CASH" for the right lane, which generally means, get your ass in the left lane if you don't have a tag...

I'm only shitty because it's partly people who go into the tollways without etags, causing the operators to have to send out fines and perform debt recovery, which increases the tolls on those roads every year!

GET YOUR DAMN ETAG ALREADY!

Grannymar: Yeh, I know I should get one but I don't drive on tollways very often so it's cheaper to pay the notices at the moment.

Steph: Sadly, it's an American speed hump! Our possums are much prettier. And the lab is my third child! Lily. She's incredibly spoiled!

Benchbloodywarmer: For goodness sake, just cos you're a technophile and gadget geek! Not all of us drive into the city every day. Actually, it was ADAM who got the fine because he was picking me up at the airport and didn't have any cash on him. I should get one I know, especially with the Lane Cove Tunnel and M7 now all cashless. Signs schmines . . who reads all that guff anyway. Note my personality profile BIG PICTURE person, no time for detail.

Anyway, I'm only off for another week so come and have lunch if you're on leave . . my treat this time!

Hmm... well, I might be able to take a work-from-home day, as I have an event to organise for latter in the month, that will require a lot of creativity. And there aint much creativity in the office.

Will keep ya informed.

I love that about Autralian, not so much the advertising but that everything is so well sign posted. You can find you way around anywhere.

Nonny: Either that or you get so distracted by the plethora of signs that you run off the road into the new 50 speed signs that have been erected in your driveway during your absence . . .no what about a post from you girl?

I don't drive because don't like what the signs say. Especially the ones that blink and shine ...