Years ago, my mother in law bought me a handbag. It's an ugly, shoulder strapped thing made out of rough leather but it has useful bits. A mobile phone pocket, zippy compartments, it's a good size, totally functional but like most things practical, rather ugly. It's my 'work' bag. The bag you take when you know nobody is going to remark on it's plainness or lack of designer frippery. Flickr are running a 'handbag' competition at the moment, inviting all and sundry to 'expose' the contents of their handbags and make notes on their various sites about the contents. After looking at some of the efforts, I thought it slightly blogworthy if not a bit self indulgent (Ok it's very self-indulgent so indulge me!). Hey, it's my blog!

It's not easy photographing the contents of your bag 'o bones . . but they can be quite revealing. This could become a tag or a meme of sorts if you're so inclined - go on . .you know you want to!

The competition has some requirements which I will pass on here to those of you who accept the dare. It must be an honest representation of your bag's contents, no cute pets sitting in bags Paris Hilton style, no 'planted' bits, no camera bags (apparently they have a separate category for that - mmm . . can't wait for that one!). The bag itself must also feature in the photograph and notes should describe the contents.

Now, for the competition, I'll get a whole lot more creative, like hang my lippy's from a gum tree or throw the lot in the pool and see if it floats, or stash it in a glass bowl and get all sorts of arty farty reflections but for now, here 'tis. For the sensitive, I've removed the squashed tissues and paperclips but this is pretty much what fell out of the old gal this afternoon: 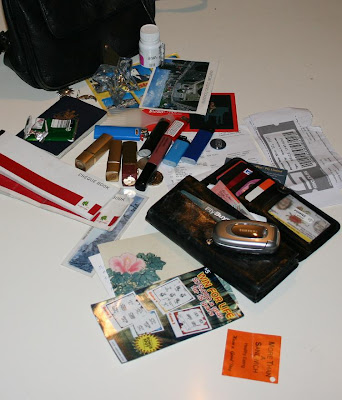 Ok . .there's a glimpse of the ugly satchell. Work your way down. Some antibiotics that I had prescribed for an ear infection and never finished. An empty bottle of 'Angel' that I've been meaning to refill for over 2 years. My favourite earrings that make my ears itch so they often are discarded into the recesses of said bag and considered lost . . I found them again when I tipped the bag out. A sun and a moon bought at an arty farty market somewhere years ago. I love them. A postcard from the Merry Widow's travels - Marstrand to be exact (that's in Sweden), another postcard from Blarney (that's in Ireland) an invitation to a client's art exhibition on all things equine. I never went. An Aktor badge of course, so small you can hardly see it but DrummerBoy thought it a good marketing tool - why he doesn't ask his mother do do a Marketing and Business Plan for him is beyond me. My father's passport - I have no idea how long that's been there, probably for the past five years, I must have souvenired it after he died. Four cigarette lighters . . none bought by me! My favourite Estee Lauder lipsticks, I wondered where they'd got to and a wand lip gloss for mid-day top ups. How much lippy does a woman need? (Hey! I live in hope that pucker lips might land me a bloke yet!) A packet of Extra sugar-free chewing gum . . fresh is best and it helps with the smoking and apparently has a laxative effect although I hadn't noticed. A dental bill, paid but not claimed. My ex-Gyneocologist's business Card. I love you Norman but I never want to feel/see you again! Unless it's socially of course and then maybe the lip gloss will pay off? A Shuttle ticket to Melbourne Airport which I never redeemed because Arky gave me a lift in the Merc. Two cheque books . . interesting . . they automatically issue a new one when there are only five cheques left in the old. Obviously, I never wrote the five old cheques. In fact the only cheques I write these days are for my farrier who is a complete technophobe and doesn't believe in internet banking. A book mark from the Snowy Mountains bought by DrummerBoy on his last ski trip 3 years ago! My leather purse and the plethora of credit cards that carry enough debt to qualify me as a third world country as well as my Fly Buys and store cards that keep enticing me on the promise of huge discounts if I spend $100 or more on scented candles or girly stuff. The flip top Samsung mobile phone that I can never get open in time to answer calls and the keypad is ridiculously small but it has groovy ring tones and stuff. A birthday card from BabySis that's been in the bag since October (that's October folks, the 16th to be precise you have a few months to get your act together so put it in your diary and save for presents!). A scratchie I bought in June with a $5 win on it that I never redeemed and a voucher for a free cup of coffee at a local coffee shop.

What's interesting is what's absent. No keys. That's because I don't have any and the ones I have I leave in the car. Please come and steal it, its worth more to me wrecked than sitting in the garage. No tissues . . I HATE snotty tissues being put back into a bag or pocket even more than I hate fabric hankies. No mirror . . . 'nuf said. No comb or hairbrush . . I don't brush my hair - seriously I never brush my hair, there's absolutely no point. Most importantly NO NAPROGESIC and NO TAMPONS! Too much information? Maybe so but that's one of the positive by products of being neutered! To steal a phrase from a young friend "Yayaya!" However they will soon be replaced with Black Cohosh and Red Clover tablets to control the 'waves of warmth'.

So, the challenge is out there . . get yer little digital numbers out, tip up the old ruck sack and show us yer stuff! Now fellas, don't be shy, I know there's a load of interesting stuff in your wallets and pockets so turn 'em out, take a photo and let us learn a little about you. C'mon . . don't keep me waiting!

Last person to play is an old bag!
Posted by Baino at 9:55 pm

Labels: Up Close and Personal

Every bag tells its story. Since I no longer carry a bag and you saw 'my life' on a keyring already, count me as done!

So you share a Birthday with Fainthearted Ian! Make it a wlobal party this year.

Or you could make it a Global party, but wlobal one sounds interesting... I wonder what they are like

I actually wouldn't mind showing the contents of my hand bag it actually quite organised (The one I have with me today that is). Maybe I will do it later. One thing though where is the mountains of change that evey handbag has?

Is that all, Baino?

Do you not have one of those pen knives with a spike thingy for getting boy scouts out of horses' hooves? Or a torch for when the car breaks down on a dark night?

I'm sure you heard the one about the man who commented that he couldn't understand how airport security thought they would find something in his wife's handbag when she could never find anything herself;-)

Oh Gawd! Looks like I'm the old bag then *sigh*

Expensive business, isn't it Baino? Our nag gets more money spent on his shoes that I do!!!

Grannymar: And so you did, so you're exempt. It may start out 'global' but will certainly end up with the wlobals!

nonny: My change is regularly 'scrounged' for the MS charity chocolates at work. They're 70 cents each for an itsy bitsy Picnic or Mars bar!

Ian: I had a Swiss Army knife but gave it to ClareBear for her travels. It's the bottle opener on it that I'll miss the most! And my torch is a Maglight, bit bulky for a handbag but I have a LED torch on my car keys too!
Michael Collins? Then I 'think' I'm in good company wasn't he the architect of the Republic? So what's in your wallet then?

Steph: Absolutely . .I have two 'boys' who are shod every six weeks at $70 a pop and fed gourmet geriatric diets during winter. They're only brought out of retirement for birthday parties these days! No marks for not playing show and tell!

Bet you've cleaned that mess up now it's been exposed to light Baino! I only carry a camera bag and what fits in pockets. Yes I'm a girl!

What's in my wallet?

I don't carry a handbag around because they are a pain in the arse to remember all the time.

I do however have many many varieties of handbags for different nights out. I never empty them because it's always lovely finding an old stash of money you forgot you had just before you go out on the tear!

It would take me a long time and many many gigabytes to cover them all, but I know they mostly hold old consession tickets, furry mints and hair-bobbins!

Thanks everyone. You're good sports. As you can tell, I'm probably now ready to return to the real world and write something a little more meaty like an economic review on why our interest rates are increasing!

Material is thin on the ground at the moment because I'm so relaxed! I need some angst . . .work will do that alright!