Going Off With a Bang Or Just a Quiet Thud? 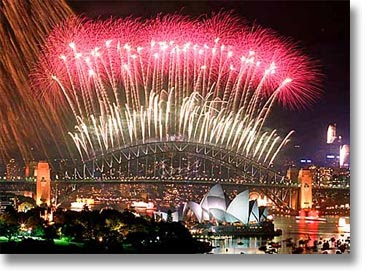 I'm not going to write a 2007 retrospective because very little of any significance happened in the Baino household throughout 2007 and all the important events have been reviewed and reviled by the media or posted here throughout the year. Plus I'm one for looking forward rather than back! For us, 'little significance' means no major disasters or family issues, no huge financial setbacks or poor health. But today, I'm at a loose end. ClareBear is in Nambucca Heads with friends enjoying the shark infested waters and will no doubt imbibe tonight to welcome in 2008. DrummerBoy is at work then off to Lemmermans for a party so it's unlikely he and the Fringelet will surface before lunchtime tomorrow. Even then there will be a brief encounter while I drive them to a recovery party at The Mean Fiddler on New Year's Day. BabyBro and Stressany rarely do much on NYE and I for one, don't really see what all the fuss is about but haven't received any invitations to do anything anyway so I'm pretending I don't give a shit.

So, I'm being pathetic, sitting in front of my PC talking people I've never met (not that that's a bad thing mind you), taking my dog for a walk, watching the odd DVD, staring at the three books I should be reading and contemplating tidying my wardrobe or the dreaded bathroom cupboard.

I've had massive New Year celebrations in the past but they've all involved eating a lot, drinking a lot, kissing people I don't really care about at midnight, singing Auld Lang Syne which bores me to tears, then coming home and wondering why we blew so much dosh on a new frock and a date change.

When the kids were smaller, we used to go into the city, picnic at Lady Macquarie's Chair and watch the 9.00pm and midnight fireworks then queue with the other 2 million Sydneysiders to get back home. It was fun and there's no doubt that Sydney puts on a NYE night like no other. A couple of times, a veritable crowd of us booked hotel rooms and had a leisurely walk too and from our viewing vantage point, wading through the drunks and the rubbish left by so many people and telling the kids that 'that nice man is just having a little snooze before the big fireworks go off." All in all, it's a lot of expense and exertion for 15 minutes of fabulous pyrotechnics. 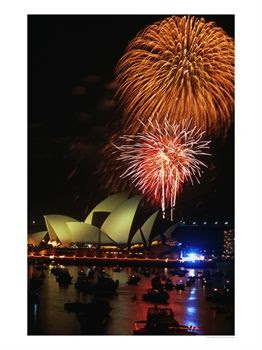 We've done the NYE at home thing and that was OK apart from the cleaning up the next day and regular body removal but nothing special about that. It happens whenever the kids have an event! We've done the dinner out thing but it's rather forced and you're usually unceremoniously tossed out at 12:30 just when the party's getting started. I've even done the quiet dinner at home thing with BabyBro and Stressany or Thommo, TheBoss and The Merry Widow and watched the fireworks on telly which is civilised and pleasant but hardly celebratory.

I'm toying with the idea of going into the city alone. We have buses running all day every half hour for the special event. I could take the camera and snap some shots but since I lost a pair of $250 Raybans on NYE once, I'm a bit reluctant to take a $1500 worth of camera equipment. Still, I could go and 'oooh' and 'aaaah' with the rest of Sydney but it's not the same on your own. I'd feel a bit like that sad little Leunig cartoon that contemplates loneliness, the univers and his diminutive place within it.

So, I'm on my tod. On my lonesome. Flying solo. It's off to Costi's for a nice little lobster methinks, a bottle of something delish like Verve Cliquot and a disgustingly fattening tub of Norgen Vaas or Grand Marnier, coffee and Chocolate Covered Almond Conoisseur Ice Cream. I might even blow dry the frizz, put on a dress and lay a table for one plus dog. I'll have a very nice little dinner, watch the fireworks on telly and pop my fat ass into bed at 12:05! What a saddo! (now stop feeling sorry for me, I didn't try very hard to get a gig tonight!)

At least I know of one person who's working all night and another who's researching migration to Australia rather than partying hard so I don't feel totally left out. For the rest of you revellers - go hard or go home - well done - enjoy your night, I hope it goes of with a bang (metaphorically speaking) and I'll talk to you all next year. 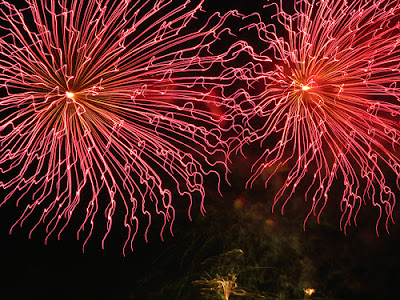 And a Happy New Year to you ol Baino!....We to will not be doing anything memorable....christmas was a dud and now new year feels a little sad and sorry too. Just a barbie with friends and kids of course....until the chillen grow up a bit - thats pretty much how our New Years will be....I did buy some sparklers!! Not even a purchase from "Thunder"...bring on 2008 I say! See you next year then!

You have made me drizz all over my nice new laptop. I'd send you a ticket to join D and me having a solitary barbie if I thought you'd get here on time.

New Year's Eve. Hmm and ha. I've gone to bed at 10 for the last few years and just not bothered about it. Some were years on my own, some were years with D. Strangely, I don' think I've ever done much of the NYE party bash thing.

This year, however, I've decided to try and stay awake even though I'll feel like shite in the morning. 2007 wasn't a brilliant year healthwise and I think it needs ushering out and the new year welcoming in. I've decided there must be something in all these rituals of ours, so I'm off to explore what that might be. I will now dutifully google for symbology of New Year. How sad is that? ;-)))

Have a wonderful 2008, dear Baino, may I make it to skype while you're still awake, may you be blessed with love, laughter, joy, peace, happiness and harmony and may 2008 be your best year ever. Hey, maybe BrianF will propose. Ha ha ha ha ha ROTFLMAO. Heh, hope your sense of humour is intact, dahling! ;-)

Your gig at home sounds much more fun than most!

Thanks for all the fun and frolics in 2007. Roll-on the New Year and lots more bubbly!

Well Lou oops I mean Babysis . . thanks for inviting me! Looks like I'll have to drink my bottle of Moet on my own! Happy new year darls.

AV: Aww don't drizz. I'm fine, really. Like I said, didn't try too hard to get a guernsey. You're not that sad, I've been listening to old Jefferson Davis Podcasts! Same to you and the "D" ster, especially the health bit, I know you've had a rough trot! More blogging and beligerance in 2008! And photos of course! All the very best.

Steph: Thanks to you also and I hope 2008 sees an end to your problems although if it does, you'll have to rename your blog! Cheers to you and the fam.

Ropi: Nice that you've joined our little band of boffins. I'll increase your vocabulary if you like with some Australian colloquialisms and you can stun your pen friends! Have a great 2008 !

HAPPY NEW YEAR EVERYONE! (OK I'm a bit early for most but that's the way the cookie crumbles! I'm off to watch the fireworks.

Baino you are not alone in being alone as the year comes to an end. Enjoy your little party and happy thoughts.

May your quiet start blossom into a lively exciting year with plenty to blog about!

We're having a day of yarn-shopping followed by an evening at home with cheesy movies, kids and champagne. Not terribly exciting, but it's the most appealing of my choices for the time being.

Well I'm stunned that nobody was impressed with the mention of Connoisseur Grand Marnier Ice Cream with chocolate covered almonds!

You made it to watch the fireworks! I was very impressed with all within your second last paragraph :) HAPPY NEW YEAR BAINO!!! Ouch, I have a headache ...

Nice Fireworks out there. I loved how they were captured.