Josh Has My Vote but Will Has My Heart 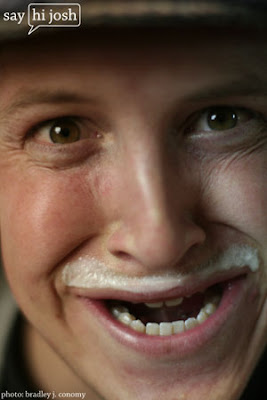 On Christmas Eve, ClareBear, Jem, Hannabannana and I took once more to the streets to check out Christmas lights on a street that had turned off its lights the night before. We weren't disappointed! The street was crawling with people and critical neighbours were parked on the nature strip cryptically analysing each home and display, their esky beside their folding chair and knowing glances towards each other as they made their deliberations on the best decorations. I suspect they were residents of the area and familiar with last year's efforts as there was much, "mmm . . he should have brought out the three D reindeer" and "I think the giant spike would have looked better on the roof". Anyway, while we were clogging up the roadway and admiring our neighbour's handywork we were approached by a young man dressed as a Christmas present . . yep, tights, box and the bow. He was accompanied by the world's best Will Farrell impersonator ever, dressed as Will did in Elf with an American accent to boot. This duo were giving out what appeared to be business cards for a young man called Josh who wants to be on the next season of Big Brother . . .a local boy . . .they were out grabbing support.

Now much as I hate to admit it, I love BigBrother. It fills a timeslot here which is just around tea time and there's little else on TV other than tabloid news so why not . . . for the most part it's boring . . for the best part, it gives me something to discuss with the younglings at work on Monday morning. C'mon, we all have our favourites. Now don't judge me . . .I just like it. I told you I live vicariously! So, the card has a picture of a very 'normal' looking 20 something, dressed like a bad taste golfer pouring what looks like chocolate milk over his deer stalker cap and www.hijosh.com printed on it. OK, I'm curious. I thought Big Brother contenstants largely sent in a DVD of themselves and were ultimately selected by the producers of the show to be as antagonistic and controversial as possible, but this guy is canvassing votes on Christmas Eve, dressed as a Christmas present? What the? So, just because he had the audacity and a creative video . . a neat website, he likes chocolate milk and he's a local and he has a square tongue . . . he's got my vote. And just for the record, no I don't actually vote for people on the show but if he turns out to be a dick, I just might!

C'mon . . it's Boxing Day, you didn't expect an intellectual dissitation the day after Christmas Day did you? 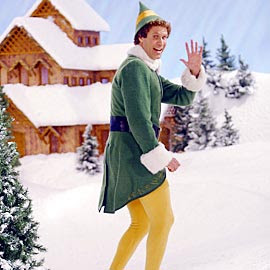 I've been sucked into BB a few times and it can be good zombie material at the right time of evening. After watching a few of Josh's 'episodes', I can safely say he IS a dick! Won't even waste my money voting him out HAHHAHAAA.

Oh no Baino! All your literary wit and your intellectual subject matter and it turns out that you're a BB fan! I'm gutted! I don't know what the Oz one is like but the UK one is just full repugnant pathogenic reprobates. If it was a case where, instead of being evicted, the one with the most votes was executed in a manner choswed by the public, I might watch.

If we're confessing what shows we watch and are ashamed to admit, I have one for you.

I love Judge Judy. Do you get her in Australia? She is a favorite of mine and, I'm also not ashamed to admit, I have watched BB a few times ,too! So, shoot me!!!!!

Jack: Don't think badly of me! It's my numb half hour. Chill time between coming home and making dinner. Apparently ours isn't as saucy as the European versions and they canned the "Up Late" version because of a Turkey Slapping incident last year. (But I don't know what that means of course . . .) Hope you're on the mend!

Nancy: We do indeed and having been housebound for the past few weeks,(I am now mobile again thankfully) I admit I've given her a burl as well. I will never understand why people put themselves on TV like that. Same with Dr Phil! But boy is it entertaining/scary watching the supidity of others.

Hey Baino!
I'd just like to say, that night we came around and visited the street was one of the most enjoyable nights i've had! The kids reactions were great.
And yeh it's true, i am a dick...but if this world didn't have dicks, where would babies come from?
Peace
Josh

Hi Josh . . took you long enough! Hope you made the show. . .I'll be watching. Big Brother appeals to my inner moron. If you get in . .I might even vote! Bring back the dreads.
Peace and chicken grease.