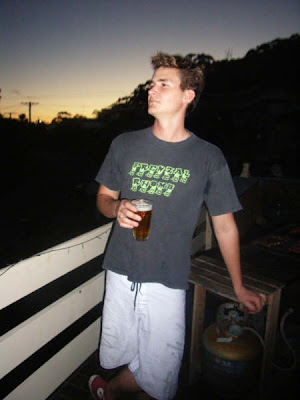 Once upon a time, turning 21 was a milestone. You received the key to the door, it was your passage into adulthood. Today, 16 marks your sexual maturity and 18 your political, social and educational passage into adulthood. Yet some kids still celebrate both birthdays with huge parties, pissups and presents. Being the tight arse pragmatist that I am, I issued an ultimatum to mine . . celebrate one or the other but no double dipping. Both opted for the 18th ‘bash’ but the 21st ‘significant present’. So that’s the way it was. ClareBear was given holiday spending money and today . . my little prince turns 21 and has his holiday in Phuket paid for all bar the beer and beach massages. Yep, my little curly lad is all growed up into a big boofy, argumentative, won’t be told, scruffy lookin' nerf herder with a heart of gold, a strong sense of family obligation and a deep affection for his mum and sister despite his constant moaning that I nag him about sheet changing and cutting his hair.

Little AB came into the world in a hurry and hit the ground running. I almost had him in the lift . . no time for comforting epidural’s with this little tyke he was ready and able. He was a sweet toddler with masses of curly blonde hair and a propensity to blow wet raspberries when ‘driving’ any form of equipment from tricycles to Tonka Trucks and despite the lack of influence from a male adult, he grew up decidedly blokey. Yep, the usual porn under the mattress, swearing like a trouper to the point that his mouth was often washed out with Morning Fresh as a deterrent and getting into trouble for doing doughnuts in cul de sacs and underage drinking resulting in projectile vomit all over my dashboard. Bless my little angel!

He applied himself to his education as needed and survived the HSC and three years of university, I suspect without reading more than a dust jacket which surely is a mark of super intelligence. He wasn’t a great sportsman but had an interest in golf, baseball and soccer Xbox and Playstation. In fact for a long time, our DrummerBoy had just a select few friends and could be considered quiet a loner. That is until motor bikes came along . . remote control cars, pocket bikes and the band. When he turned 12, I bought him a ready made drum kit as a surprise . . . he jumped out of his skin. Since then the kit has been refurbished and new cymbals and skins added but it’s basically the same little budget set. The following few years saw him put together a little band called Indecent Exposure at a time before he could drive. I was the Drummy Mummy, helping lug equipment to and from spurious venues from the local ice rink to dodgy dives. When he literally ‘grew’ out of them he and a friend established Aktor . . .now he’s excelled in his field and has been offered gigs with quite reputable bands but he’s loyal to his posse and will stay until there is no reason to remain. The title Rock God suits him . . he is a legend in his own lunchtime.

DrummerBoy is obliging . . he’s a hard worker whether it’s crawling through roof and wall cavities for BabyBro threading data cables or lugging 25 kilo bags of salt for pool shop customers or pruning roses and laying fertiliser for Tutti Frutti Nursery . . .physical labour has never bothered him. He will mow when asked (bear in mind this is about 3 hours’ work on acreage), he lugs when asked. He maintains our swimming pool which is more than any of the other men in our household have ever attempted to do. He begrudgingly puts out the sulo bins each week and brings them in again but he does it. He is moral and has a strong sense of what is right and fair . . woe betide anyone who treats him unfairly or tries to rip him off. He is the master of the consumer complaint and justice will be his. He is a fine chef. Messy as all hell with a tendency to add just one secret ingredient too many but the boy can cook!

He is more like me than I care to admit. He won’t be told but has to experiment. He has a life plan and is doggedly focussed on achieving it. He is a tender and attentive boyfriend without being pussywhipped. He will have the last word (which sometimes takes a while if the two of us are at it). He is incredibly fair and a creature of reason. He’s gracious and well-mannered and reason for the many compliments I receive on his upbringing. He rarely leaves the toilet seat up and has only once attempted to blow up the house with balsamic vinegar and pool acid!

He’s a born organiser (not domestically but you know what I mean) and effectively Aktor’s Manager by default. He is fiscally irresponsible and spends more than he earns (another trait he has inherited from his mother) but he’s also very generous when money is flowing in.

And today . . . he’s 21 years old. We're not having a big celebration, just Thai in Parramatta but it's a special event nonetheless . . . My baby no more. Happy birthday sweetness and light. I’m proud to be your mum!

You're a very attentive mum!

Nothing happened when I was 18 and by the time I was 21 I was gone from home (I got married when I was 22 and have lived in a different country from my parents ever since. Maybe kids are given more time to grow up now. Ninety years ago and drummer boy could have been in Gallipoli, it's hard to imagine.

Ian: That's true. Fortunately, mine know which side their bread is buttered on and have dawdled at home. I'm thankful actually but fledging the nest is definitely on the cards over the next few months . . .just a financial issue for him.

you can't kick him out, we would lose our fires and drinking and swimming and and and...

mm maybe it is time for us to grow up...

Enjoy your youth and, as Ian alluded, thank God there is no Gallipoli in your life.

May there always be peace and prosperity for you......

Ryan: You can come and lite my fire anytime whether he's home or not! And you know how it goes. They move out but they never really leave home!

JD: Well yes he does! That's why he turned out so absolutely fabulous. He just didn't inherit the tidy gene.

Nancy: Thank you, very kind and I'm sure he'll appreciate it.

HAHHA, Happy Birthday Drummerboy! He's a real male isn't he! I thought it was for 21st's where you post really embarrassing baby photos? I'm still collecting them for my boys ;)

Dear Santa I want to be a wordsmith like Baino!

Happy 21st to a wonderful Son with an even more wonderful mother!

[Not your real Grandad - The other one]

Happy Birthday, Drummerboy - have a blast.

Baino - are you supermum or what, having raised two such excellent kids!? ;-)

Anon: Seriously, I haven't got any embarrassing photos of him apart from dribbly chin from raspberrying

GM, Nonny and Grandad, thanks, I'll pass it on.

Jack: You drummers stick together I'm guessing! Yeh, they're not too shabby.

AV: There are advantages to single parenthood, my house, my rules! I AM THE FAT CONTROLLER ..well I was.

More tears in the eyes. Another powerful piece of writing which I'm sure will be treasured in years to come. I hope DrummerBoy is proud of his Mum too 'cos she definitely deserves it.

Steph: You need to toughen up girl. He also smells . . .hasn't washed his hair for six weeks and doesn't own a pair of jeans without holes in them! But I can't say too much about that on his birthday, now can I?

I am Mrs.Irene Query i was in need of a loan of $150,000 and was scammed by those fraudulent lenders and a friend introduce me to Dr Purva Pius,and he lend me the loan without any stress,you can contact him at (urgentloan22@gmail.com) Approvals within 2-4 Hours

Hello Everybody,
My name is Mrs Sharon Sim. I live in Singapore and i am a happy woman today? and i told my self that any lender that rescue my family from our poor situation, i will refer any person that is looking for loan to him, he gave me happiness to me and my family, i was in need of a loan of S$250,000.00 to start my life all over as i am a single mother with 3 kids I met this honest and GOD fearing man loan lender that help me with a loan of S$250,000.00 SG. Dollar, he is a GOD fearing man, if you are in need of loan and you will pay back the loan please contact him tell him that is Mrs Sharon, that refer you to him. contact Dr Purva Pius,via email:(urgentloan22@gmail.com) Thank you.