A Pint of Good Cheer

BabyBro gets these moments of inspiration where he wants to redecorate everything, clean out everything, revamp everything . . .given that we expect our house to be bulldozed sometime in the next couple of years, I'm reluctant to spend serious money on the place. In his pre-Christmas zeal, he has decided that the Pool Room needs to be refurbished. We have adjoining houses with what used to be the garage in between, now all connected under the one roof and converted into a wet bar, pool and entertainment room that opens onto a large covered patio where we eat, entertain, BBQ and generally muck about in the warm summer months.

He wants to strip the wallpaper (I'm happy to do that), replace the old fashioned 'pool hall' style light with a more illuminating strip. He's already installed a DVD, data cable, TV and Foxtel (he was going to thread it through to my living room but as yet, I just have a big hole in the wall behind my TV - bloody electricians). But Monday's foray was into the bar, removing my father's long dead and long flat collection of weird and wonderful beers which are now sitting on the BBQ table waiting for someone who's interested in old flat beer to collect them. It also led to a 'tidying' of the cupboards. Behind the bar is like a small kitchen with loads of storage but it's become a recepticle for everything from silly 'straight to the pool room' novelty items such as a Wallace and Gromit Windscreen Protector and some hand beaten copper trays made by long deceased aunts, to my old picnic set, an awful glass barrel and accompanying shot glasses, a cheap silver tray that nobody wants to claim, an old food processor, oil lamp, some shitty glasses with "Orange Blossom Festiaval" cheaply painted all over them, a small Christmas tree, spare pool balls, a draughts set and a myriad of coloured light bulbs. Also, found . . my Grandad's Beer Tankard.

Now my paternal Grandad was an interesting fellow although he died when I was very young. I know very little about his pre-married life other than he was from Great Harwood a working class suburb of Manchester which has long since been absorbed into 'Greater Manchester' and totally lost it's identity. He had a brother Billy, who bred Newfoundlands, wore a flat cap and very probably rode a bike! He was blinded during the first world war by a shrapnel blast and was 'retrained' as a baker but he would never have a dog. He thought it was a sign of weakness when seriously, he couldn't bear to be away from home for 6 weeks while he trained with Royal Guide Dogs for the Blind. Somehow he managed. My father was a boy when they lived in Platt Lane which is still there today and somewhere near was the bakery. My Grandad, my Grandma Ellen and their two daughters Marian and Daphne and of course my dad . . managed the shop, delivered the bread and eeked a reasonable living out of the bakery before retiring to the south of England in the early 50's. They lived in a nice house in Henlow Bedfordshire but it was a long trip from our home in Cheshire so we saw them but twice a year at Christmas or New Year and Whitsun.

He had this wonderful way of touching our faces to see how much we'd grown and changed each six months he caught up with us. It never seemed odd to us because we'd never known any different. He used to do magic tricks that resulted in chocolate being found exactly where he said it would be. Took us years to work out that my father was in cahoots and planting Picnic and Mars bars all over the country. He sat in his Grandfather chair, smoking a pipe and recounting stories of better days and ate his egg and bacon breakfast in a sandwich because it was easier than negotiating a knife and fork.

Whenever we stayed with our grandparents, we were allowed to wonder through his vegetable garden and pick fresh strawberries or rhubarb which we dipped in sugar to counteract it's awful sourness. We helped him make ginger wine and I don't know how he did it but he managed to erect a rope swing in the alleyway between the house and the garage so we could play there if it rained.

He wasn't one to smile often but he had a kind face. I think his milky eyes made him look rather sad and pathetic but he wasn't. He came on holiday with us once to Wales. My mum parked him in a deck chair whilst we all sploshed in the freezing water off Oxwich Bay and she made a cup of tea on a gaz stove, surrounded by a canvas wind break . . . she forgot to check the direction of the sun and the poor old bugger got awfully sunburned.

During the same holiday, my dad took home movies and we have a movie of him running freely on the beach at about 70 years of age, confident that he couldn't fall over anything or bump into anything or do himself or anyone else harm and the look on his ageing face was priceless, he beamed at the freedom. I often think that if he'd swallowed his pride and taken that short vacation and learned how to use a guide dog, he would have enjoyed more independence, more freedom but it wasn't for a proud old soldier like him. Silly really, it's just not an issue to have a cane or a dog these days.

I never took him for a religious man but he used to sit quietly on his bed listening to a record playing Bible stories and other 'talking books' long before I knew what they were. I'd be allowed to sit beside him on this monstrous high double bed, he with his arm around my pudgy little shoulders, me snuggled into his chest, neither saying a thing other than when the record finished, he'd announce "Well that's it then . . we'd better be off for a cuppa tea lass!".

Another one of his 'sayings' lives today . . he'd chastise naughty behaviour with a booming voice and in reply to our 'Sorry Grandad' . he'd gruffly say. ."Sorry be damned, ye'll have te be thoomped!" He exaggerated his thick northern accent then would melt into a smile, knowing full well that if we did a runner, he'd have no hope of catching us, much less of actually connecting!

I actually remember the tankard in use. My dad used to walk him about 500 metres to The Crown at the end of Henlow High Street. If they went during the day in summer, we'd go with them to watch the Morris Dancers flick their coloured handkerchiefs and whack each other on the head with an inflated pigs bladder (such is English folk culture). They would both take their own silver plated pints . . . order a couple of bevvies, catch up with the old fellas and return, empty pints in hand, replete and connected. Arm in arm, never drunk but mellowed by the experience. My Dad often said how much he enjoyed those solitary walks down to the pub without the hub of the women drowning out Jack's quiet and considered conversation.

There's nothing left of him or my Grandma now. They're buried together at St Mary's in Henlow, with nobody left in England to mourn or visit and all that marks their passing are our fading memories and a little stone plaque. Rather sad really that these memories only last a couple of generations. Very zen. But I remember him and his silly silver tankard so that's all that matters right now. 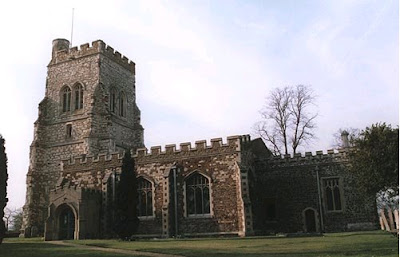 St Mary's Parish Church Henlow . . .
I used to be woken to the sound of bell ringers practising!
BabyBro wanted to throw it away but I couldn't see it go. It's dead plain, no inscription, no decoration, not even a glass bottom but it's solid, heavy with an epns mark on the base. It's a working class recepticle and because I remember him using it, I wanted to hang on to it. Another addition to the Red Suitcase or the Curiosity Corner . . I'll polish it up and see if it warrants display. Strange behaviour for someone who's basically a tosser.
Posted by Baino at 1:12 pm

HAHA, great ending and loved this story. Your memories are going to last longer than a couple of generations because blogged Baino! Smiling ... :)

A lot of happy memories are in that tankard, Baino. Beautifully told.

Hang on to it!

That's an excellent treasure to have Baino. I can't believe the BabyBro wanting to throw it out. Such is the disposable generation I suppose.

Anony: You think? Is this really my testament to posterity - oh dear!

Steph: I have a few little bits and pieces like this but they're my treasures all right. I'm not a hoarder by nature.

Ah . .he's the same gen as me Jack. Just 4 years younger but no memory of the tankard's use so it has little sentimentality for him. Although from what I know about your adoration for ale, you'd prolly appreciate it!

It'll end up in the bin one day . . difference is I tell my kids the meaning of these little collectibles. Don't get me wrong. I hoard very little but every nick nack has it's story. If I was a beer lover, I'd take it to my local for a regular re-fill. Environmentally friendly and reminiscent!

Stick a few flowers in it and keep it working!

What a wonderful story - seems we're both remembering paternal grandparents today! Your granddad sounds like a right character and a strong and spirited man.

Nothing left of them?

Course there is - on another shore and in a greater light.

Aaah Baino, my friend you have told a lovely story. And I think it's great to be remembered, even if your grandad is not alive to tell you how much he appreciates it.

Wishing you a wonderful Christmas and brilliant New Year with your family and loved ones!

AV: True that! On the same plane we are

Ian: Why did I know you'd say that? I sincerely hope so!

Gaye: Thanks. He meant a lot to me even though I was only an ankle biter. Nice reply on AV's post by the way!

Bainoz dear, thanks! I feel like I said too much and possibly some people will be offended but seriously, what's freedom of speech if we can't speak our mind freely to start with? :)
You should have seen my old blog (was called the G-Spot), I had spewed out some frustrations there on politics and the like.
Jingle Bells Jingle Bells Jingle Aaaall the Waaaaay! :)