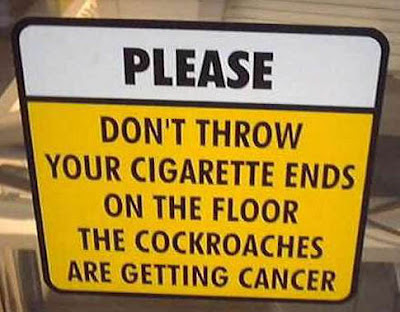 I am very proud of myself. I am now in my 7th non smoking day after having the habit since I was 16! Despite outward appearances. I couldn't tell you how many people are surprised when they see me smoking for the first time "My God! I'd have never picked you for a smoker!" or "You so don't look like a smoker" . . . whatever a smoker looks like. Perhaps the fact that I don't have nicotine stained fingers or a raspy cough counts for something!

I've mentioned that we were ten pound poms. Immigrants to Australia from England in the 1960's. (stay with me, it is relevant) My father had a job to come to in Australia but it involved a two year stint in Melbourne then an interstate move to Sydney. The move to Sydney happened during my formative years. I'd just had time to make friends in Victoria before the huge wrench. I tearfully left my first boyfriend behind, Steven Rodriguez, I wonder what he's up to now?

The upshot of all the moving and shaking was a term at Carlingford High school in what was then, 2nd Form . . . I was 14 years old. At the time, I wasn't sure whether my parents would buy a house in the area or whether this last term of the school year would be my only one at this particular school. It was important to connect, to make friends, to not feel like the transient new kid. It was here that I met Kate. Like all my best friends, she was pretty, happy, popular, thin as a whip . . . she knew everyone and everyone knew her and I was lucky that she too was a horse owner so straight away we had something to talk about which of course managed to get me into the inner sanctum of her circle of friends and gave me a sense of enormous belonging.

Once Dusty (my horse), was shipped up from Melbourne, Kate and I became inseperable companions. We rode every weekend, we stayed at each other's places. We holidayed together. We shopped together. We met boys together . . . we learned how to do the 'draw-back'.

Yep, back in the day when you could buy a pack of Viscount tens for 90cents (the pack was just small enough to stick in one of those "Fibs" stretchy bra's and withstand the jiggling of a gallop along Rexona's manicured nature strip. We would go down Loyalty Road, now lined with light industrial offices and factories, to a small but beautiful sandstone creek. The horses could splash in the water and we'd picnic on one of those huge flat, water-worn sandstone shelves and smoke ourselves stupid. We blew smoke rings, blew smoke out of our noses, inhaled and giggled. That my friends was the beginning of a long and expensive relationship with nicotine!

I did end up moving after that term, into Sydney's Northwest where I've pretty much lived ever since. Kate and I still keep in touch - she now lives about 5kms from me. She has of course given up. In fact most of my smoking friends gave up by the 80's. Thommo and TheBoss used to smoke . . . I remember fagging on in the car from Sydney to Adelaide! Can you imagine? The MerryWidow just stopped before having her babies and never looked back. Ark stopped about six months ago to save money. In fact only one or two of my contemporary friends smoke. TheBenchwarmer virtually chain smokes foreign cigarettes and Ryan tends to toke more than he should.

So, I feel quite good. TheBenchwarmer came over with lunch yesterday (he's so sweet) and although the thought of bumming one of his smokes did cross my mind, it really didn't bother me that much. Despite the fact that for years, I've smoked Benson and Hedges 16's, I only ever smoked half a cigarette, only ever smoked early in the morning and in the evening and at Friday Chardy lunch. I've come to the conclusion that addiction isn't the problem for me, it's the 'habit'. It's about changing habits, doing something different to the norm and I don't even think about it. Just as well really because smoking anywhere other than your own home is becoming more and more difficult and at $12 a packet of 25 the cost is prohibitive.

So, it's the beginning of the journey. ClareBear is elated. I'm putting the savings into a piggy bank that she gave me, to go towards my little trip next year and seriously, given the amount of time on my hands at the moment, I'm doing pretty well.

Apparently if I don't smoke:

Well good for you!

I smoke Camels.
They are about $3 a pack of 20.
They'll kill me.
Or Global Warming will.

OH WOW! You've given up smoking (easily!) AND have a dream camera! Congratulations Baino ... I want photographic evidence! You'll now be able to to let me know why people say "You so don't look like a smoker" to me because I have nicotined stained fingers and a raspy cough HAHHAKAA *gasp*

Fair play to you, gal!

You'll also be able to smell and taste things in far more detail which can be both a good and a bad thing!

Have fun with the new camera :)
*jealous*

All will be well until you hit Paris next year, they are still serious smokers. As an asthmatic, it's one of the things I don't like about the place - that and the lack of a decent cup of tea.

Oooh!!! You bought the Canon! Woohoo! Looking forward to seeing the output.

Oh and by the way, perhaps you can find that Rodriquez chap on Facebook - oh wait, you mean you've checked already! ;-)

Wahaay, well done on taking the first step! I'm of them 6 years now. The only thing that happened to me was that I put on weight. I was 6ft 2 and only 10 stone, bullies used to kick sand in my face. Now 6 years later, I'm 14 stone, I swallowed 4 stone of sand.

You have the cause - every time you feel tempted just say Europe!

Haa, well done Baino, I am proud of you!!

Well, if you DO get hit by a bus, you'll have better breath when the handsome stranger comes to give you CPR.

Keep it up Baino - even if you're already in arrears!

We've just had Budget Day today in Ireland and I think the smokes got hammered.

I've been having problems getting comments to you but I'll keep trying.

Anon: Well it's easy at the moment cos there's no temptaton but I'm coping.

K8: I already have a very acute sense of smell . . .DrummerBoy will have to lift the level of bedroom hygeine.

Ian: Yeh same with quite a few European cities I've found but I'll be well over it by then and I'll remember to bring my tea bags!

Jack: Well hello big boy! I can't afford to put on any weight or I'll be a target for Greenpeace save the whalers. This means I've had to seriously temper my alcohol intake which hurts me more than I can say!

GM: That's the plan althought the piggy hasn't got any cash in it yet because my son keeps borrowing my savings!