It is a brave turkey that wonders the streets at this time of year. It is an unusual thing to 'see' a turkey wondering the streets this time of year, or any time of year for that matter yet that is what I saw yesterday. In down-town Terrigal, the Central Coast suburb by the sea . . . there was an Australian Bush Turkey on my in-law's neighbour's lawn . . can you see it? 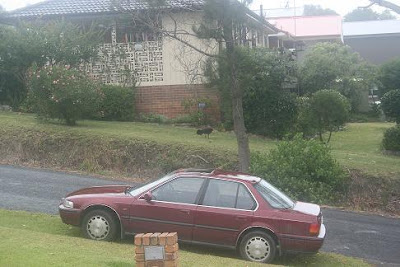 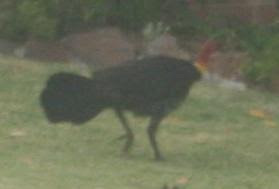 Sorry about the quality but it was raining and taken through the window in a hurry,
this bird was on the move!

I kid you not . . . a black female bush turkey crossing Lakeside Avenue bold as brass and trapseing over somone's back garden! Apparently she and her partner are regular visitors to the Groovy Grannies and causing some consternation among the neighbours due to their digging and scratching! This is no ordinary turkey and is rarely found in the burbs in Sydney although they're quite common in Brisbane.

The dreaded Bush Turkey, or Brush or Scrub Turkey is more at home in the rain forest areas of northern NSW and Queensland so what this one is doing in Terrigal, I don't know. They build huge mounds (usually by turfing over your newly planted saplings and ground covers) then the male of the species attracts a female to lay her egs within the mound and he then regulates it's temperature until the progeny hatch. He adds mulch or removes debris as required to ensure a consistent temperature. The mounds however can be as high as 1.5m and about 3 metres across! How'd you like them apples?

Once we'd got over the novelty of turkey on the run, the Clan commenced their early Christmas with the Groovy Grannies yesterday with a Kris Kringle gift exchange. Instead of buying everyone a gift, we draw names from a hat and spend something substantial on one person each. This year was a good one with a box load of goodies for me from six champagne glasses, a bottle of Moet, a colander and some nail clippers we're using some which fell out of a Christmas Cracker last year), two lovely Esprit Bathtowels and two new pillows, a book and the first series of Six Feet Under yay! ClareBear managed to score a sizeable voucher for J & B Hi Fi which will enable her to purchase a nice little waterproof camera for the big trip and thank goodness . . .DrummerBoy has a voucher for Jeans West . . . I can now volunteer his torn pairs for the garbage on Wednesday! So, good food, lots of wine and some pretty decent gifts, not to mention the opportunity to catch up with the inlaws and nephews . . we all had a pretty fine time. Now I'm just about ready for the big bash week after next when we have our own Christmas Celebrations at home! Um and no . . we won't be eating Turkey.
Posted by Baino at 11:21 am

Hmmmm, it does make you wonder whether a Brisbane Bush Turkey has escaped from someone's kitchen doesn't it! Sure it wasn't one of the gifts from a Groovy Grannie ... any grannies from Brisbane? Hhehhee!

Cor blimey! Weren't you lucky! I've never had a Kris Kringle as good as that one. Are you meant to wear the colander on your head while you drink the bubbly? ;-)

Is it wild? I would have taken that Turkey and kept her out my cack garden. Baino you didn’t really indulge in much convalescing, what with nipping around the place attending family gathering and such, had it of been me I’d still be rolling round the ground in agony. Well done!

'wear the colander on your head while you drink the bubbly'

Steph I thought Baino did that all the time.

Is that species protected or something?

I wish my Christmas dinner could be found like that, although the chances of a Quorn Roast or a Nut Roast sprouting legs and running around is pretty slim.

Steph: Um check out the photostream, I think I did don it as a 'fascinator' for a brief period!

Hey Nonny - you're alive! Well the species is but she was so far from home, I suspect someone's keeping them. Nah, I'm fine and the kids are doing a fine job of chauffering me around otherwise I'd go mad!

GM: Don't be cheeky! I usually only wear a colander when I'm mock fighting with a spatular in my hand!

Jack; Yes, they're a protected species (and they won't kill you)You're remarkably cheerful for a vegetarian(trust me, I'm related to one and he's miserable). I wonder if sharks eat vegetarians?

When should I come around and bother you this Christmas... I think soon would be a good idea...

Tell me when you're free!

BenchWarmer: Come and warm my bench whenever you like! Only days booked so far are Sunday 23 arvo for pre-Chrissy foodage and Christmas Day! Otherwise, drop in for drinky poos, swimmy poos or just talkypoos. And have you paid your internet bill yet? Your site was offline whence last I looked!

A Bush Turkey, hmmm... I'm having visions of what I could do with that bird and a certain "world leader" in photoshop - it was the line, "bush turkey crossing Lakeside Avenue bold as brass and trapseing over somone's back garden..." that clinched it.

Frankly, I'll stick to guinea fowl - though I'm clearly feeding them way too much given the size of the erm, calling cards!