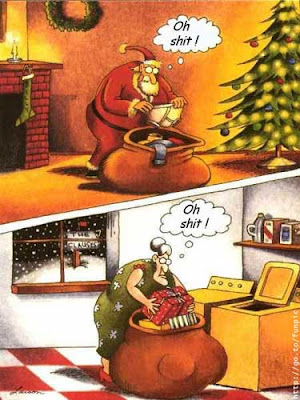 Because it’s Christmas . . . well because Christmas is approaching, there is much in the news, on the blogs and in conversation generally about what this means. There is rampant political correctness with Americans being encouraged to call their Christmas Tree a “Dream Tree” and to refer to the Christmas Break as the “Holiday Break”. There is pressure on early childhood educators to de-Christmas their decorations and nativity references in an ever expanding multi-cultural curriculum. Even in my place of work where two out of the three partners are Christians, we send Wilderness Calendars to clients so as not to offend, the large Jewish client base that we have although interestingly enough, we receive Christmas Cards from some of these clients.

Now I’m all for being polite. I’m all for having empathy and tolerance for race, religion, customs, creed – even dress code. I have no problem if the Christians want to wear a cross around their neck to school, if the Muslim wants to wear the hijab or the jew forgo Christmas for Hannukah. I have no issues with religious specific schools, Christian or Islamic. Everyone has the right to preserve and practice their faith. I don’t care if gays want to appropriate the rainbow as their symbol of sexuality. I don’t even care that Red Santa is an advertising logo for Coca Cola . . he’s a jolly old souls and he makes me happy!

What I do care about, is the noisy minority dictating policy and actually effecting change without the plebiscite of the wider majority.

Some news items this week:

Santa Sacked For Being too Personal

A retired actor come Myer Store Santa was sacked because he said “God Bless You” to some of the store patrons and complimented a child on the attractiveness of his mother. Upon being asked who brought the child to Santa on that particular day, the boy replied “My mummy, she’s over there”. Santa’s retort, “Oh yes so she is, what a very pretty mummy you have!” Is that sackworthy? Jesus if someone commented on what an attractive mummy I was, I’d take it in my stride, my ego would swell and I’d have to go up a hat size!

Just north of where I live, a poor father of 2 lost his life when his motorbike was collected by a truck. His distraught family erected a small plaque mounted on a custom wooden frame, no more than a metre long. This was installed at the side of the road on the council owned verge. It was a sweet reminder of the man this family had lost, in a location that they passed every day. One person complained that this was a distraction . . . how many? Yes you read right ONE fucker complained and the council removed the plaque. I really hope this family puts a petition together to reinstate the plaque which unlike so many was not adorned with distracting flowers and teddybears, nope, just a simple carved wooden sign and a candle.

An attempt to prevent Santa’s from saying “Ho Ho Ho” because it could be offensive to women and frightening to little children, was thwarted this week as Political Correctness gone mad . . .apparently ‘Ho’ is a derogatory word for an American Black woman so what place it has here I don’t know and how a preschooler would make that association absolutely escapes me!

People, this is . We are renowned for being forthright, insulting, apathetic. We call a spade a fuckin’ shovel. Although it takes a bit to stir us into actioon, we dont allow others to come the raw prawn so why do we put up with this namby pamby sucking up to one or two dissenters who’s delicate sensibilities would have us sanitise, life the universe and everything. It’s bloody un-Australian and has to be stopped.

A boong is a boong, I was a dirty pommy bastard when I arrived here, Kiwi’s are still sheep shaggers. Spiks, Micks and Wogs deal with it. A curry muncher does and a towel-head wears one so get over it. You can pray to or play with your Dradle . . .use a fork or a chopstick . . . wear a hajib or a cork hat for all I care. Take it with a grain of salt. Have a sense of humour. Imagine if we all pointed at each other and started laughing at our differences instead of whingeing about upsetting each other Now, check you're knowledge on some real Aussie values and get off the politcially correct bandwagon.

1: Which of the following is NOT an Aussie value?

A: Telling jokes that involve New Zealanders and sheep, or Asians and homework.

B: Ignoring Warnie's off-field transgressions because he is the Sheik.

C: Living in and claiming Steve Irwin was being reckless.

2. What is 's official language?

A: Sorry, could you repeat that in English?

D: Destroyed, as in "Mark Latham girt my camera".

4: What is the significance of ?

B: The Anzacs landed at Gallipoli.

A: It was Don Bradman's Test batting average.

B: Interest rates were this high under Labor.

C: Bert Newton will retire at this age.

7: Which of the following is an Australian native?

8: Which of the following was an unbridled success?

A: Naomi Robson's mission to rescue Wa-Wa from cannibals.

HO HO HO Baino! I found out about the 'Ho thing' and what Aussies thought from an American. Yep agree :)

Well all I rated was noworries minus, mate.

"Ho ho ho" is only offensive if the Santa is in fact a 16 year old pregnant trashbag from Mt Druitt. That staement in itself is offensive....sorry!

Has Clare and Jem been STALKING ME!?!

Nice try Anonymous . . but my amazing powers of deduction have you positioned a little closer to the coastline than Mr Druitt! Northern beaches perhaps! Within coo-eee of Kuringai National Park?

Brian: You don't count, you've been here before so you have an unfair advantage. No worries is a damn good score for a yank! Well done. Give that man a Tooheys!

Political correctness my ass they ruin everything. They love Christmas in my parents house and my sister in law is not even a Christian (I personally think she is the devil in disguise but that’s another debate entirely). It doesn’t have to be about religion, it can just be about Santa and maybe being nice to people but mostly letting kids imagination run riot. I am seriously considering buying a Stag colouring his nose red and telling my niece on Christmas morning that Santa left Rudolph behind.
Hmm At least I tried the questions.

I got about half of them. But I stole the image for next years Christmas cards! Pity I had this years already done.

PC is for wimps and for people with nothing better to do than to go around nitpicking.
Could you imagine it if a white Christian approached a mosque and asked the Immam to de-Allah-fy Ramadan?
While I have no time for religon, I have even less time for self-righteous asses.

Actually, after doing a further bit of thinking there, by making Santa say Ha Ha Ha instead of Ho Ho Ho, they're actually giving into the fact that 'ho' is an acceptable colloquial term for 'whore'.
Time for a campaign! Time to take the Ho back! Time to put the Ho back in Ho Ho Ho! Ha ha ha me arse!

On my last contract I was told, in no uncertain terms, not to use the word "click" when talking about using a mouse. I was told to use the word "Press" instead because 'click' was non-inclusive for deaf people. So when I had deaf people in my classes I asked them about it.
Every single one of them said that was the most stupid thing they ever heard of. One of my students asked me for my instructors email address so she could send her an email and, "take her to school".

Look what I found in Baino's living room! ;)

Nonny: Quite so. I'm not religious but the tree is up, the decos ready, the theme set and some of the shopping done! Tis the season to be merry so just try and stop me!

Go Jack . . tell us what you really think!

Brianf: For fucks sake. How do you tell them to right click? "Right Press" just doesn't make sense.

Ian: I used to love Sooty. And I collected Robertson's Gollywog labels to get a free badge - remember those?

K8: That was so last year . . .I've graduated to Champagne bottles! Twas pretty tho, eh?

Religion will kill us all. You're so right, it's a bunch of clowns with little to do that are imposing this sanctimonious shite on the rest of us.

Hey Baino. I lived in Australia 9 years ago for 1 year and found it and its people to be open minded, fair and good craic (irish for fun). I took the piss out of Aussies and they did the same to me, all in the spirit of fun of course.

I can't believe the changes in attitude in the last 9 years and it's not just in Australia. It seems to be a worldwide thing.

I'm coming back in 2008 for another year or two and if I hear a Santa saying Ha Ha Ha he'll be getting a kick up his fat red arse.

Sorry EmptyHead missed your comment before. I dont think we're quite as bad as the brits and a lot of this PC stupidity gets nipoped in the bud. Santa's still Ho-Hoing . . . if you're heading to Sydney, let me know!