While the Cat's Away

While this old moggy was away, her little mice began to play and in a way that wouldn't have been considered cool at an age when it might have been considered 'more appropriate'. Combine a bunch of 21-25 year olds, 25 metres of thick plastic, a very illegal soaker hose and buckets of bodywash, shampoo and conditioner and you have a 23rd birthday party that ClareBear will remember as her best to date (and to think all that money I wasted years ago on Magicians, Fairies and Face Painters!). Some of their morning after bruises and scars were worse than mine! 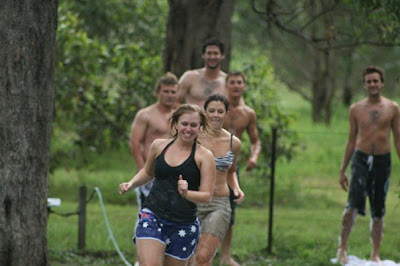 The all important run up. The better the run, the further you go -
Jem in front, Clare hot on her heels 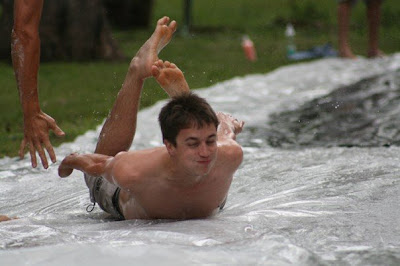 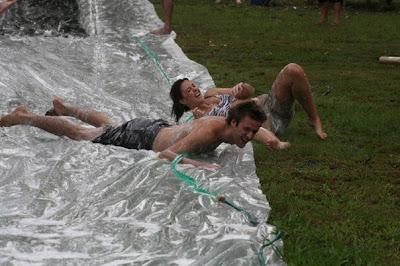 Mitch might be a good surfer but his control of the 'mat' is dubious. Drops in on Clare and wipes her out! 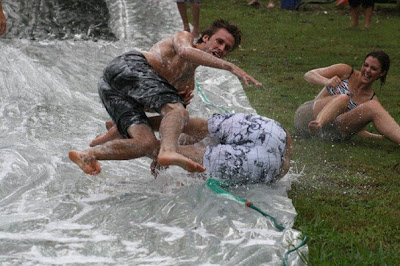 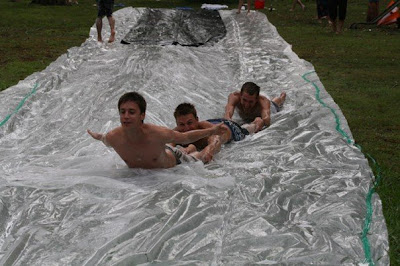 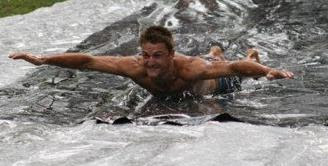 The master of speed, style and sheer panache - Brad! 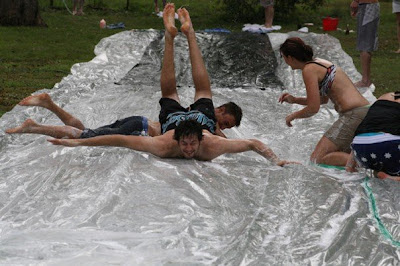 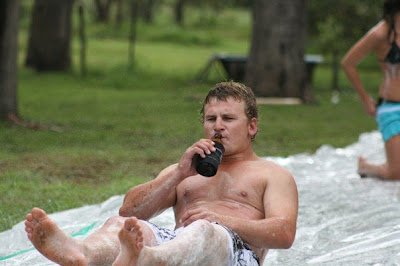 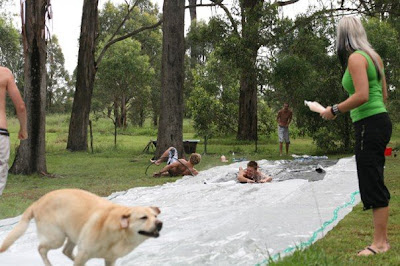 Best idea ever!! We're bringing this thing out every weekend...actually maybe when the bruises heal...

MEMORIES!!!! Before water restrictions and too close neighbours who are dobbers! Have a big smile on my face, love all the pictures, what a birthday! Oooh happy birthday Clarebear, it won't feel so special if you do that every weekend ;)

Hey, you at work tomorrow? If not, lunch. I shall be working from home.

Clare: The video is even funnier, edit it to music and I'll post

Anony: See, they have all the fun when I'm not around! Thankfully, we are great water savers so a little indiscretion is allowed once in a while!

BenchWarmer: Yep, That would be lovely I'm free but grounded. Come to mine! Um, bring food!

Ha that looks looks like the crack alright.Would you not get carpet burns though?

Nonny: carpet burns, blisters, chest and torso scratches, blue knees and bruised hip bones and they're the visible injuries. Adam's been creeping around the house today as if he's had a total hysterectomy . . revenge is sweeeeeeeeet! Great Craic to counter the pain by all accounts!

Best wishes to Clarebear and is there any chance of one or two of those Toyboys going spare? If so I bag first choice! ;)

That's soo cool! We did that a few years ago in my back gaden. Great fun!

Hey Baino, how come we non-Blogger users can no longer link our sites?

That looks like more fun than a trampolene in a Guinness brewery!

I'm so glad you did so well with your neutering experience... I was finking of you all weekend!
Did they give you a lampshade for your head to stop you knawing your stitches? ;)

Those are brilliant pics.

A 23rd birthday party here would generally involve most of the blokes, and a few of the girls, getting totally blocked and puking up on the way home. (Dublin city centre is a grim place late at night).

It's no wonder your sporting teams are so good, if scratches and bruises are part of having fun!

GM: By all accounts it was. They even did it via spotlight after dark little buggas. Just as well we have understanding neighbours.

Jack: I don't know. Only blogger links seems to be working, own servers and Wordpress people don't seem to be able to link. I'll explore, maybe blogger has given us another 'preference' to click. If the Benchwarmer comes for lunch, I'll get him onto it. The kid's a whiz!

K8: Thanks, um no collar necessary, I'm not supple enough to reach that 'area'.

It's just as well the Cat came back when she did - even if she does have a lampshade on her head!

We used to have one of those plastic slide things when my kids were young-ish. To get maximum speed up, they used to say "Sod the neighbours" and strip naked! I don't think you'd get away with that these days such is the world of political correctness.

Are you sure you've seen all the party pics, Baino?

FYI Blogger is in draft phase of what they call OpenID and as a result, has broken links to commenters sites. You can establish links through 'Nicknames' below if you want to. Otherwise just post a link. I'll also link you if ever I talk about you in a post. (Unless you prefer I don't.)

Then again, I might move to Wordpress if I get really bored! tee hee.

That looks like sooooo much fun - I wanna play too!