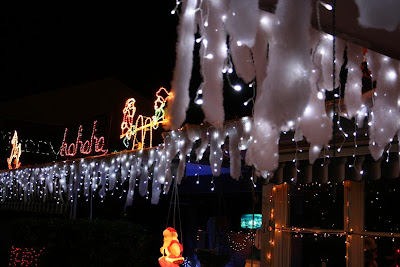 ClareBear has a penchant for shiny things so it was no surprise when she asked who would be interested in going to peruse one of the few things we like inheriting from the Americans, our Grizwald Family style house decorations. These are becoming so popular that now our council offers a prize for the best dressed house and/or street. There's even an internet 'guide' on the best streets in your area. So, armed with our guide, DrummerBoy, Fringelet, Cimenti, ClareBear and I piled into the car and went a sparkle hunting.

I'm still mastering the art of ISO and shutter speed so DrummerBoy took most of the photos, his technical mindset far more patient with knob twiddling and lense turning. The streets around the burbs were literally littered with dedicated followers of all things sparkly. A couple of the houses were raising funds for Make a Wish Foundation and Child Heart Desease so we were happy to part with some gold coins.

We stopped at Bella Vista and discovered a rather nice Italian/Pizza restaurant and were dutifully given candy canes upon departing (another rather American idea that we quite like!) We then ventured up to Castle Hill, Kellyville and Beaumont Hills (yes we live in the Hills District) for more carusing and perusing and discovered Geraldine Avenue . . . now this display made me feel better about admiring so much electricity . . apparently it only costs $60 per month to run a display of this magnitude so their power consumption isn't as terrible as I first thought. Oh but the sparkles, the time taken for intricate window displays.

The spirit was lovely, people were friendly, Grandpa's took their grand kids and wished everyone Merry Christmas and generally, it felt very Christmassy indeed. Stark contrast to our earlier grocery shopping experience where we couldn't wait to get out of the mad mele of shoppers. . . . of course whilst in this street a carful of foul mouthed middle eastern twats chose to abuse the onlookers, deride Christmas and fly the finger at 80kms down the street! Chicken shits, would they have been as brave on foot! I doubt it. What drives someone to make such an effort to be rude! Pricks.

By the time we hit Beaumont hills it was 11:40 and a few of the displays had been curtailed for the night.

The only dampner on the night, and right at the end as we're dropping Cimenti home, we were attracted by fast approaching flashing lights of a different kind . ClareBear, the only driver on the road at that moment, is pulled over by an over zealous policeman. Why? Well we don't know other than perhaps he was trying to impress his pretty off sider with his RBT skills or perhaps because she was driving my car and displaying green 'P' plates and forgot her date of birth when he shone his maglight into her eyes. Perhaps it was the silly Christmas hats being worn by two of the passengers or her flashing green and red earrings. Perhaps he thought Santa had chosen a new mode of transport this year or more likely that we were pissed as newts after attending the Castle Hill Tav . . either way he didn't get his way . . . she wasn't speeding, she hadn't been drinking, the car was registered and roadworthy and the P plates not illegal so he had to gulp back a dose of humble pie and turn his Christmas lights off (blue and red just isn't Christmassy). Rather ungraciously I might add, he took his merry time checking out her licence and our registration. No Christmas spirit in that lad - he must be rostered on tomorrow! So, poor chicken, feeling a bit intimidated and shaken up, despite being totally innocent, drove on and dropped everyone home

We found one street that we're going to revisit tonight and maybe I'll get my hand a little steadier and my shutter speed right. If not, I'll just ooh and ahh . . and hope that we don't get quizzed and random breath tested by a testy policeboy . . .for no 'man' would pull over five sober revellers in a fully registered, non-speeding 16 year old Honda . . poor thing must have been desperate for a booking! 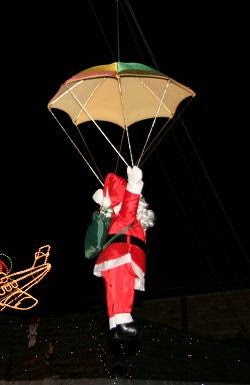 And I thought Santa used a sleigh and reindeer? 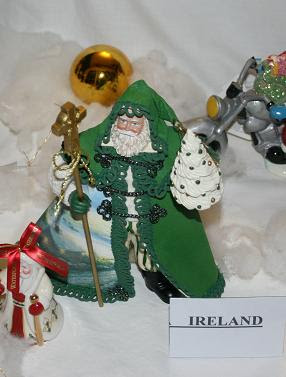 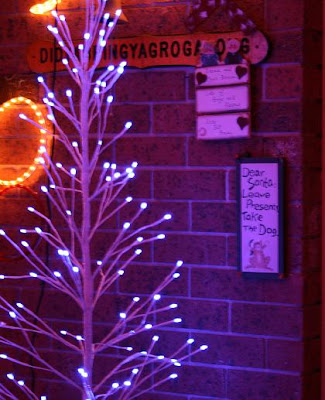 Loved the signs on this door, they even invited Adam inside!
Note the house name "Didyabringyergrogalong" 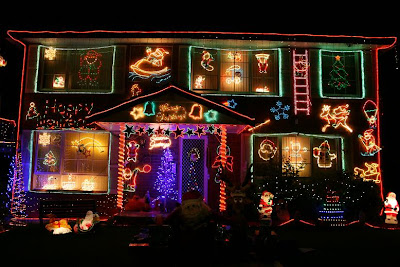 And the total effect! Wonderful!
Posted by Baino at 8:38 am

HOHOHO wonderful, spectacular! Usually try the same after Chistmas Eve dinner but will make sure there's no lagoon in photos, avoid police and answer NO to that excellent sign, "Didyabringyergrogalong" ;) Although, it's supposed to be raining tonight and not sure if the Valiant leaks! Thanks for the Chistmassy post Baino CHEERS - or not until later :)

Wow! I really love those pictures you took!

Only four days left and counting, Baino, till you can run amok!

And No, that didn't read SMOKING!

Merry Christmas to you and your family.
I am enjoying the photos....you are putting GB and I to shame :)

Anony: You drive a Valiant! I'm impressed, pure vintage! Go anyway, the kids will love it!

Brian Damage: You're a n00b to blogging and certainly a n00b to photography. These are the work of a rank amateur but thanks anyway.

Brianf: Cheers mate. Same to you and yours.

Steph: I cheated and went driving to find strawberries this morning! I'm freeeeeeee!

Brethred: You are very kind but mine are just happy snaps from a good camera. I've seen your portraits, now they're fablious.

Oh my, all this being nice to each other, it's getting saccarin . . must be the Christmas Spirit! heheh.

I might have guessed you'd break the rules!!! I did too!

After all, a girl can't possibly have bubbly without strawberries ;-)

Cool idea. The whole house bedecked in lights is something that's only just starting to happen here and I think I might follow your lead and trundle down to the one street where just about every house is lit up.
One family started the tradition about sixteen years ago and since them they've slowly persuaded the whole street to join in. I've never seen it but you've given me an idea...

Have a wonderful Christmas, Gorgeous!

I copycatted your post at photo blog with more to come but for now CHEERS!!!

Much thanks to Brianf for reminding me - have a fantabulous Christmas and a fantastic New Year ;)

What's in the Christmas Spirit? Vodka? Gin? Whisky? Heh! And this is coming to you from my new Christmas present - way cool! :-)
Hope you had a great day, Baino!